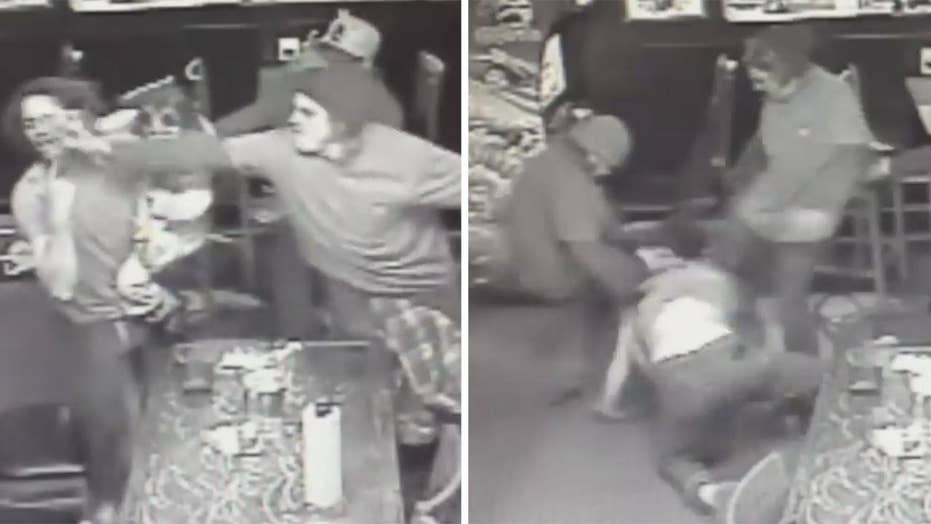 Raw video: Man physically engages group of men while holding his four-year-old daughter, numerous punches are thrown before the little girls is taken away and the men savagely beat the father in a Colorado bar.

Police are seeking a suspect who was captured on tape viciously beating a man holding his 4-year-old daughter while at a Colorado bar last Thursday.

The Jefferson County Sheriff’s Office released a video Monday of the suspect and another man, Joel Michael Wilson, 31, viciously beating Richard Warry Brown, 39, as he held his four-year-old daughter. The incident occurred at Crossroads Pizza and Wings in Pine Junction.

The video showed Brown being punched in the face a several times before the child was taken out of his arms by a bystander. The brutal fight continued as Brown was punched to the ground and held by the men who continued to beat him and kick him in the face.

Brown was airlifted to a nearby hospital and sustained serious bodily injuries, police said. He was also issued a “summons for misdemeanor child abuse” following the incident, the sheriff’s office said. The young girl was not injured in the quarrel.

Brown’s family told FOX 31 Denver that he did not have a chance to put his daughter down as the fight began. It was not immediately clear what ignited the brawl.

SMILING PERV ARRESTED AFTER ALLEGEDLY EXPOSING HIMSELF ON SUBWAY

Wilson was arrested and faces “charges of first-degree assault-extreme indifference, second-degree assault — serious bodily injury and child abuse.” He is being held in Jefferson County Jail.

Police have released still images from the surveillance video in hopes of identifying the other man involved. He has been described as white, 5”8 and aged in his mid-20s.