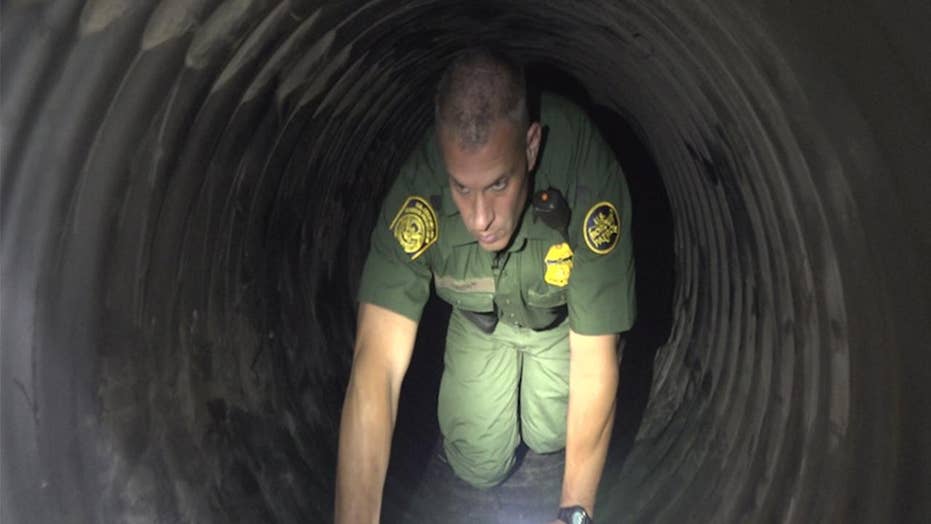 Since 1990, more than 200 cross-border tunnels have been found by US Border Patrol.

Two tunnels were found in Mexico this month—both dug into the main sewer in Nogales that flows from Mexico into the US. Border Patrol. There were also two other tunnels found on the U.S. side in the past few months.

The most recent one, found in December, was a 50-foot long tunnel leading from Mexico to Nogales, Arizona. It had digging tools inside and was submerged underwater, which Hecht and agents closed up before any illegal drugs could make it through. This incident came just months after another tunnel was found in San Luis, Arizona.

Border Patrol attributes the finding of the two Mexican tunnels and those found in the U.S. to the partnership they have that’s improving with Mexico federal authorities.

Dan Bell, an Arizona rancher on the border, says the tunnels are “definitely a problem in [Nogales].”

“They’re getting into our storm drains through tunnels and breaching those systems,” Bell said.

Hecht says many of the tunnels, which show up sporadically from year to year, are used by smugglers to transport illegal drugs into the U.S. for their profit. Many of the tunnels found are dug into the cross-border sewage tunnel.

“They (the smugglers) float them (the illegal drugs) in the sewage,” Hecht said. “They get in there, they extract the product and the sewage keeps flowing. They have a good mechanism of knowing flow rates. There’s a science to it. So, it’s not just for your average person just to drop something in and say it’s going to show up at this amount of time. The people doing it know what they’re doing.”

Hecht says many of the tunnels, which show up sporadically from year-to-year, are used by smugglers to transport illegal drugs into the US for their profit. Many of the tunnels found are dug into the cross-border sewage tunnel. (Fox News)

Since 1990, more than 200 cross-border tunnels have been found by U.S. Border Patrol.

“Smugglers (and) tunnels always have been a threat for us,” Hecht said.

It’s why agents have been using this proactive patrolling method aboveground and underground for a decade. And for Border Patrol’s Tucson Sector, the number of tunnels found in the U.S. has decreased since 2016. According to Border Patrol, five tunnels were found in 2016, 2 in 2017, and 1 in 2018.

“We have to have agents underground patrolling all the pipes, not just the big ones but also the small ones around here,” Hecht said. “We’re very proactive, we’re not reactive—we don't wait for tunnels to show up. We're actually out seeking them and seeing what is under construction and making sure that we detect them immediately.”

Cornell Law School immigration professor, Stephen Yale-Loehr, said given the number of tunnels, people flying over the border, and arriving by sea, there needs to be a multi-pronged approach that includes better drones, more personnel and electronic surveillance.

“I agree they have increased their ability to find these tunnels but we keep finding new tunnels—it’s a never-ending problem,” Yale-Loehr said. “And no matter how much money you have or how many personnel you have, you’re never going to be 100 percent effective. But, certainly, they are doing a better job now than they used to.”

A LOOK INSIDE THE TUNNEL FOUND UNDER THE US-MEXICO BORDER

As talks of border walls keep paralyzing Washington, some say that the tunnels show even with a barrier, smugglers will still find their way in.

Yale-Loehr said a wall could be one aspect of the multi-pronged border security approach. But it won't solve the problem.

“We just have to be vigilant and try to make sure that we’ve got defenses to combat any way that they try to get in, whether it’s under the wall, over the wall, or through a port of entry,” Yale-Loehr said.

A Border Patrol agent demonstrates climbing into and out of the mock tunnels used for training at the Border Patrol Tucson Sector Nogales Station. (Fox News)

Border Patrol agents also use robots in drainage pipes to assist them in tracking down tunnels.

“They don’t have to wait for their headquarters to give them a go on building a tunnel—they just get it done,” Cramer said. “They have the funds and they just get it done. And that’s what we need to do. We need to stop trying to be afraid of offending people, we just need to get our job done. Because if we don’t do business like they do, we’re never going to beat them.”