Retired ICE-HSI special agent Victor Avila, whose partner was killed by a drug cartel, argues the cartels must be considered ‘terrorists’ after a CBP agent is killed in a shootout with drug smugglers.

Federal agents and officers tasked with securing the border seized more than 1,900 pounds of fentanyl in October, as authorities continue to raise alarms about the illicit drug.

U.S. Customs and Border Protection (CBP) said the seizure came in the first month of fiscal year 2023. About 1,900 pounds of fentanyl was also seized in September, according to CBP figures.

In fiscal year 2022, authorities took in 14,700 pounds of fentanyl and a total of 656,000 pounds of drugs, including fentanyl, cocaine and methamphetamine, among other illegal substances.

Fentanyl seized in Nogales, Arizona. Border agents and officers seized more than 1,900 pounds of the illicit drug in October. (CBP)

Recently, border agents in Texas, seized more than 1,500 pounds of drugs with a street value of over $14.4 million between three busts.

Law enforcement officials have warned of a spike in deaths linked to the illicit drug — which is 100 times more potent than morphine and can be fatal in small amounts. The drug is created primarily in Mexico using precursors from China, and it is then transferred across the land border of the U.S.

Of the 108,000 overdose deaths last year, more than 80,000 were linked with opioids like fentanyl, which is often cut into other drugs, making users unaware that they are ingesting the substance. 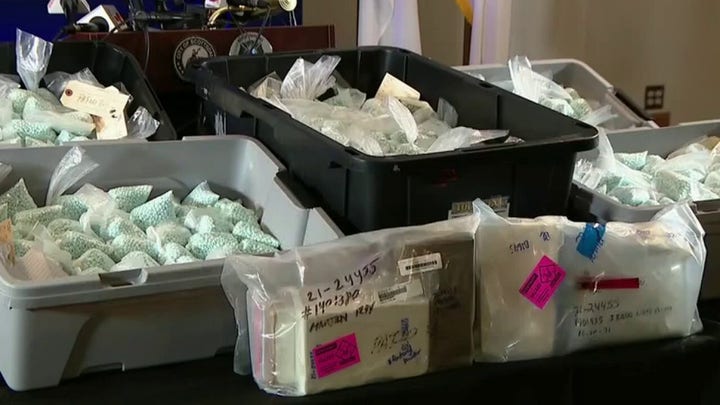