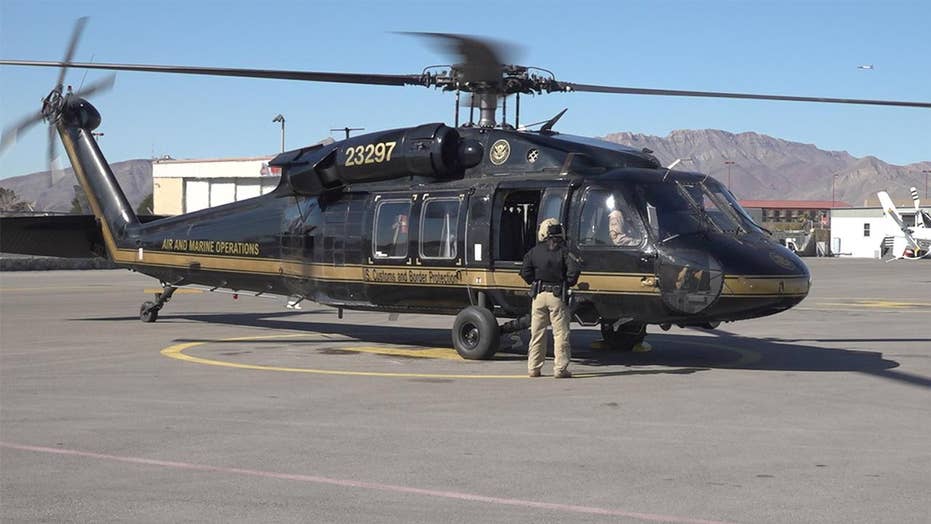 Black Hawk Helicopters are back at El Paso border

Big military helicopters known as Black Hawks are being reintroduced at the U.S. and Mexico border. They’re getting mixed reactions down in El Paso, Texas, as some say they are making the town feel like a war zone.

EL PASO, Texas-- Black Hawk helicopters are being reintroduced at the U.S. and Mexico border in El Paso, Texas.

U.S. Customs and Border Protection’s (CBP) El Paso Air and Marine Operations Director John Stonehouse says the UH-60 Black Hawks are essential for national security and emergency medical aid. The El Paso Air Branch has one of the largest ‘Areas of Responsibility’ or AORs, and the terrain can be tough.

Black Hawk helicopters are being reintroduced at the Texas and Mexico border (Stephanie Bennett / Fox News).

In fact, this isn’t the first time Black Hawks have landed in El Paso. They roamed the skies until 2008 when CBP streamlined its aircrafts and switched to a smaller helicopter, the UH-1 N Twin Engine Huey.

However, the UH-1 Huey is now retiring, so the El Paso teams are switching back to the Black Hawk. Stonehouse says it’s the most affordable and logical option.

“It can travel about 30 percent faster, it can be operational almost two times longer and it can pick up about twice the amount of weight,” he added.

Stonehouse says the Black Hawk will be deployed for medical emergencies, natural disasters and help support border security operations across the country. They are also used for high-profile events like the Democrat or Republican conventions and Super Bowls.

“It’s not just solely an El Paso asset, it’s located here in El Paso and it responds to El Paso, New Mexico, Oklahoma - all those areas but it’s truly a national asset that deploys for national emergencies,” said Stonehouse.

For now, the helicopter will be used on a case-by-case basis. Their Cessna 200 Series Single Engine Airplanes and Airbus AS350 helicopters are used for more day-to-day operations at the border. There are 21 Black Hawks in total across the country and Puerto Rico.

Director John Stonehouse looks down at the U.S. and Mexico border from the Black Hawk. (Stephanie Bennett / Fox News).

Stonehouse says his pilots are currently getting re-trained on how to operate the Black Hawk and, when they’re done, the aircraft will be flown routinely, most likely several times a week.

“It’s not just a law enforcement role that we use this aircraft in, it’s a humanitarian relief also. We do have EMTs onboard this aircraft where we get significant aliens that are injured and dehydrated in the field. We can get medical supplies in and out,” said Stonehouse

However, the Black Hawks are getting mixed reactions. Some local residents say it’s making the town feel like a war zone.

“El Paso is probably even being punished by these strategies…I think they have distorted the reality of our border communities,” said Fernando Garcia, the executive director of the immigrant advocacy organization, Border Network for Human Rights.

Garcia has lived in El Paso for the past 25 years and says his team has noticed a buildup of military technology at the border.

“They are very noisy, by the way, and they are very large -- but the sensation that you are at war, that this is a war zone is becoming more and more evident and obvious and I still pose the question again all of that is needed for what?”…The U.S. and Mexico border -- it is becoming one of the most militarized borders in the world,” said Garcia.

Air and Marine Operation got their first Black Hawk in November and is expecting two more to come in the spring.