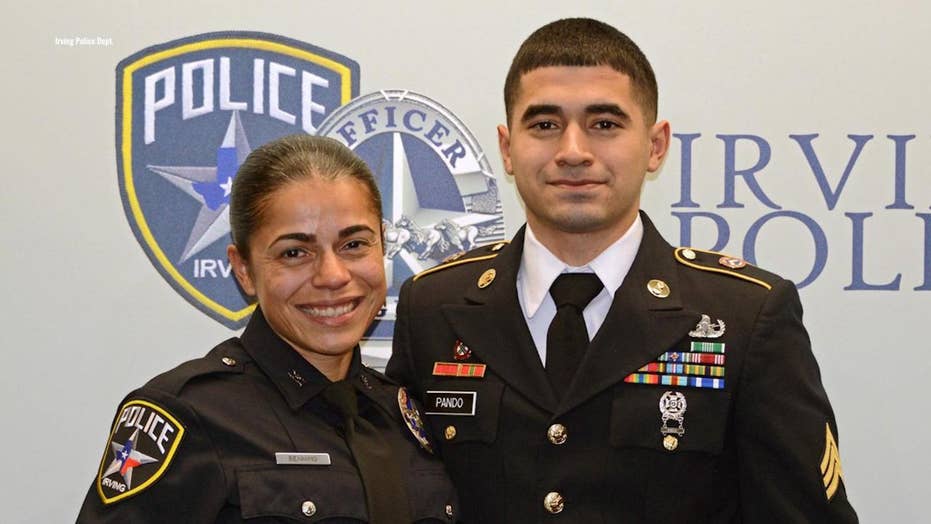 A new police officer in Irving, Texas, got a big surprise when her military son appeared at her swearing-in ceremony, after he'd been stationed overseas for two years.

A 21-year-old military son -- who had been stationed overseas for the past two years -- surprised his police officer mom during her swearing-in ceremony in Texas.

"All swearing-ins are special but every once in a while one tugs at your heartstrings a little more than others," the department wrote.

ARMY SON SURPRISES MOM AT WORK AFTER DEPLOYMENT: 'I'VE BEEN PLANNING THIS FOR YEARS'

Chief Jeff Spivey handed Officer Erika Benning's badge to her husband so he could pin it on her uniform, but then her son, Sgt. Giovanni Pando, walked out from around the corner.

Benning, despite her best efforts, immediately burst into tears.

"I said, ‘Don't cry, don't cry,’ and I don't know what happened, and then it was just tears. I cried," Benning recalled to Fox 4 about the surprise that has since gone viral.

The explosive ordnance disposal specialist has been stationed overseas with the U.S. Army. Benning, who said she wanted to be a cop since she was a kid, recalled that it felt like a dream when her son showed up.

"I know the feeling she had for me when I graduated my school in the Army," Pando recounted.

And, the new police officer said she now understood why she hadn't heard from her son in a week. Her husband and son kept it hidden from her.

"It was difficult. You know," Benning’s husband, Corey, said.

"Obviously, having a wife as a police officer doesn't make it easier to keep a secret."