Authorities have identified Gary Martin as the gunman who killed several employees at an Aurora, Ill. warehouse and injured five police officers. (LinkedIn)

The gunman in a deadly shooting spree at a manufacturing warehouse in Aurora, Ill., where five employees were killed and five officers were wounded Friday, was set to be fired by the company, Police Chief Kristen Ziman told reporters at a news conference Friday night.

The suspect, identified as Gary Martin, 45, of Aurora, used a handgun and had worked for the Henry Pratt Co. -- one of the largest makers of industrial water valves -- for 15 years, she said. He was killed at the scene. The attack lasted 90 minutes.

“We don’t whether he had the gun on him at the time or if he went to retrieve it,” Ziman said, adding that authorities were not sure if Martin planned the shooting. “We can only surmise with a gentleman who was being terminated that this was something he intended to do, I’m not sure.” 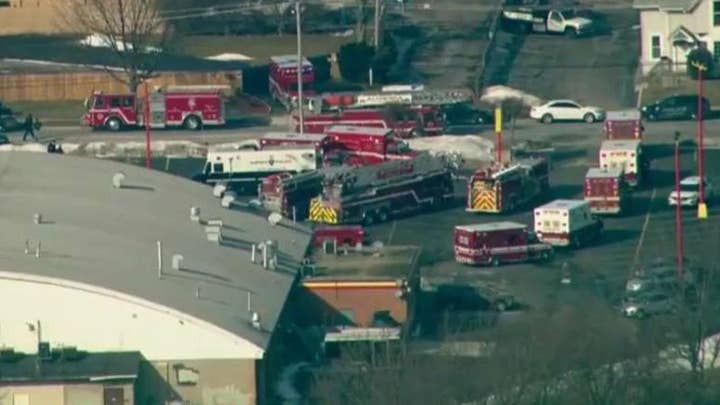 It was not immediately known if the victims were the managers who were firing Martin. The company employs around 200 people, but authorities were not sure how many were in the 29,000-square-foot warehouse at the time of the shooting.

A woman claiming to be Martin's mother told the Chicago Sun-Times her son was "stressed out" before the shooting.

“He was way too stressed out,” she said. She declined to tell the paper her name and did not specify why he was stressed. Court records show Martin had a conviction for stabbing a woman in Mississippi in 1994, according to the paper.

In a statement Friday night, Mueller Water Products  - the parent company of Henry Pratt - said it "is shocked and deeply saddened by the horrific tragedy that occurred today at our Henry Pratt Facility."

"Our hearts are with the victims and their loved ones, the first responders, the Aurora community and the entire Mueller family during this extremely difficult time. Our entire focus in the health and wellbeing of our colleagues, and we are committed to providing any and all support to them and their families. We continue to work closely with law enforcement, with whom we share our deepest gratitude for their support," the statement continued.

Police conducted a search on Martin's home, but no weapons were found inside, Ziman said.

Several calls of an active shooter were reported around 1:24 p.m. local time at the manufacturing warehouse and officers arrived roughly four minutes later "and were fired upon immediately," Ziman said.

"Two of the initial four officers entering the building were shot. Additional officers began to arrive and were also fired upon," she said. "A total of five officers were struck by gunfire."

All of the officers were taken to nearby hospitals and two were later airlifted to trauma centers in the Chicago area, Ziman said, adding that "a sixth officer is being treated for a knee injury."

Multiple law enforcement agencies responded to the scene, including the FBI and the Bureau of Alcohol, Tobacco, Firearms and Explosives.

John Probst, a Henry Pratt employee who escaped the building, told WLS-TV in Chicago that he saw a man holding a pistol with a laser sight. He said he recognized the shooter as a co-worker who was firing indiscriminately.

"One of the guys was up in the office, he said this person was shootin', and, he come running down and he was bleeding pretty bad, and the next thing you know he was walking back and forth, I heard more shots, and we just left the building," he told the station.

Ziman did not know whether Martin was targeting specific employees or if his actions were part of a "classic workplace shooting."

"I hate that we have to use the term classic workplace shooting," she told reporters. "That pains me to do so."

Police were still working Friday to identify those killed.

President Trump offered his condolences over Twitter as well: "Great job by law enforcement in Aurora, Illinois. Heartfelt condolences to all of the victims and their families. America is with you!"

The Illinois Fraternal Order of Police praised the actions of Aurora police in a statement Friday.

"Every police officer dreads days like this one, yet these four courageous Aurora officers and their colleagues did not hesitate to literally put their lives on the line today to stop further bloodshed. These four heroes willingly ran into harm's way to protect their fellow citizens and very nearly paid the ultimate price. We Illinoisans should be humbly grateful for their sacrifice, and we ask that you join us in praying that the injured civilians and police officers make a full and speedy recovery."