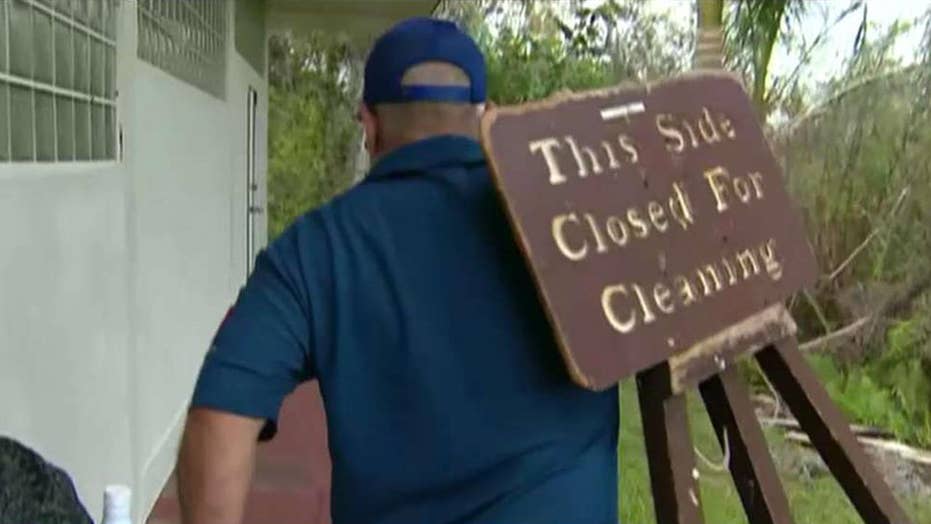 The big draws at Everglades National Park in South Florida are the birds, the endless sawgrass and, of course, the alligators.

Visitors here seemingly can’t get enough of staring at the reptiles, which slowly meander around the ponds or bask on the shore in the sunshine.

National Parks across the country are some of the most noticeable impacts of the partial government shutdown, as the National Park Service’s operating dollars are frozen and park rangers are furloughed, not getting paid and not working.

In past government shutdown battles in the beltway, all national parks were closed. This time, the parks are technically "open," but the visitor experience is a little “wild, wild, west” – no staff, piles of trash piling up and bathrooms either locked or extremely messy and out of toilet paper. At Joshua Tree National Park in California, all campers were kicked out last week to protect the park’s natural beauty from the shutdown-created “anarchy.”

This is not the case at Everglades, though, thanks only to non-government men and women handling the job that Congress and the president can’t seem to resolve.

“I’ve agreed to pay the utilities to keep the parks open,” said Jim Sutton, "so the utilities, the electric, the cost of hand soap, the cost of toilet paper—all that is a burden on the association at this point.”

The big draws at Everglades National Park in South Florida are the birds, the endless sawgrass and, of course, the alligators.  (Fox News)

Sutton runs the Florida National Parks Association, a non-profit that operates solely on donations. He’s got a staff of 60 people who are keeping things as normal as possible for park visitors, like hauling out the trash, cleaning the bathrooms and answering questions from the Americans and tourists who want to see all the interesting things this 1.5 million-acre national park has to offer.

“I don’t think it’s the fault of the national park. I’m more so concerned for businesses like myself and local businesses who are experiencing a reduction in business,” he said.

PARTIAL GOVERNMENT SHUTDOWN DRAGS ON: WHAT'S OPEN, WHAT'S CLOSED AND HOW DOES IT IMPACT YOU?

While people know and realize all National Park Service personnel have been furloughed, Sutton said, they may not think about all the concessionaires and local businesses that feed off the parks and are now not making money.

Another sometimes puzzling facet of the partial government shutdown is that some things are open and accessible, while others are not.

All Smithsonian museums, for example, are closed. For honeymooners Paul and Zuzzana Magic of Slovakia, they drove from Miami to Everglades National Park not knowing whether they’d be driving right back.

“It’s definitely confusing,” said Paul Magic. "We did a search on the website but the info is very scarce. It didn’t have current information about whether the park is open or not. So yeah, it’s just shoot and miss... or hit.”

He said when they went to see the lighthouse at Point Loma in San Diego, they couldn’t, due to the shutdown.

"I feel it’s very unfortunate for the American people,” said Florida resident Terri Perez, who was visiting the Everglades. "I feel that the border wall should have nothing to do with the national parks.”

“I just think they’re thinking of themselves more than they do the American people who voted for them and put them in their jobs,” she said. “They’re not working for us, they’re working for themselves.”

With the showdown on Capitol Hill now into its third week, and with the possibility that a resolution could be weeks or months away, Sutton’s limited funds—which usually fund education efforts—will eventually expire.

“I’ll keep the doors open as long as I can,” Sutton said. “I will continue to do what I can until the day we can no longer do it and then I’ll simply have the doors closed.”