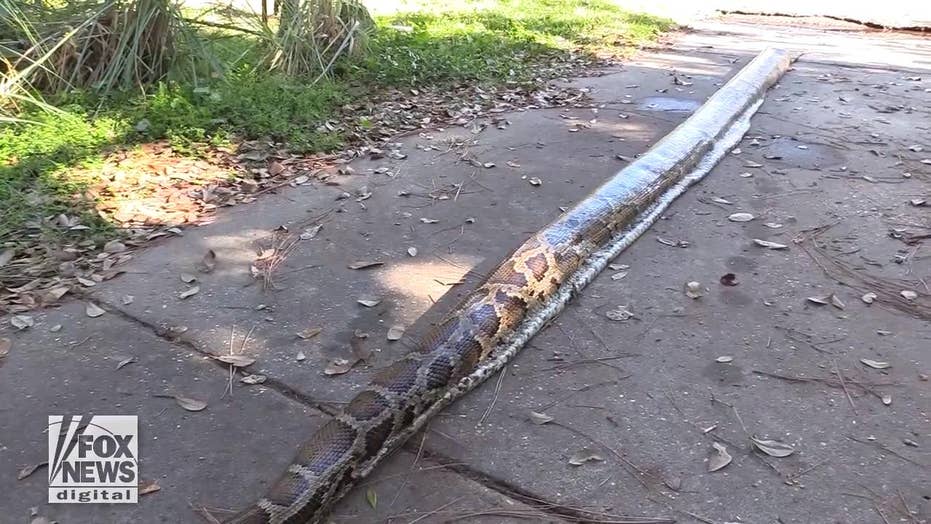 A Florida man now holds the record for capturing the largest Burmese python in the state after he ensnared a massive 18-footer over the weekend.

“Ran down, grabbed it by the head. When I did that, it constricted me from the waist down, which was the plan,” Hammond told the news station of the capture.

The serpent, which weighed 150 pounds, was displayed in Hammond’s driveway while he skinned the animal for its hide.

The Florida man's python broke the record for the biggest captured in the state thus far. (FWC)

“It’s domestic leather, and if we can get to using it here, it’s not wasted,” he said.

The SFWMD’s program helps to eliminate the “invasive” species from the Everglades ecosystem, as Burmese pythons there have “decimated native populations of wildlife,” the agency previously said.

Professional pythons hunters, as selected by program officials, are allowed to go on district-owned lands to hunt. The creatures are then captured and euthanized humanely.

Hammond’s 18-foot python was euthanized by officials with the Florida Fish and Wildlife Conservation Commission (FWC), according to Fox 35. The FWC  took to Facebook Tuesday to share a picture of the lengthy serpent, adding “during cooler months, people are more likely to see pythons during the day.”

Hammond now takes the title for a biggest Burmese python captured in the state. A man in West Palm Beach previously held the record for a 17-foot, 5-inch, 120-pound python he caught in November.