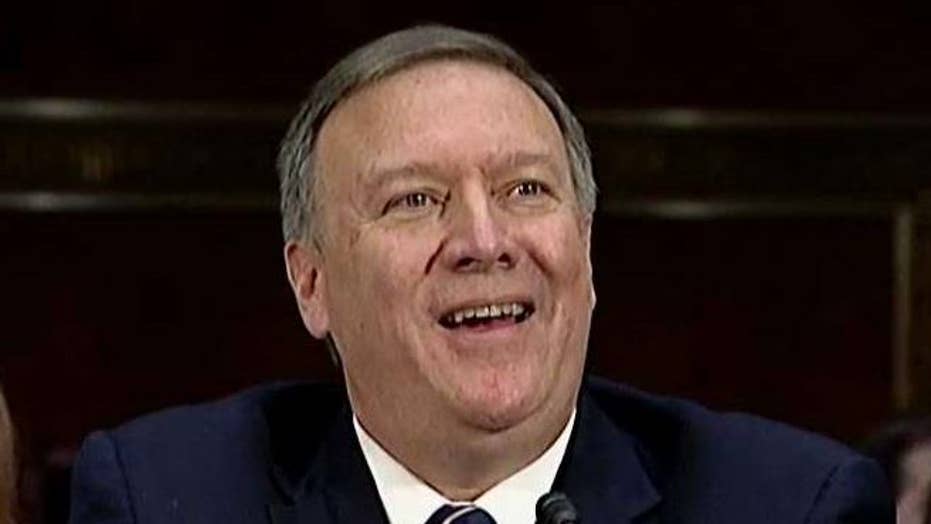 Pompeo on enhanced interrogation: CIA will comply with law

At Senate confirmation hearing, President-elect Trump's pick for CIA director testifies that he 'can't imagine' being asked to restart program that falls outside Army field manual

When it comes to obtaining crucial information from masterminds of terrorist attacks, what should officials do when U.S. Army Field Manuals methods don’t work and American lives are at stake?

That's the question James E. Mitchell, psychologist and architect of the CIA’s controversial “enhanced interrogation” program, hopes the administration of incoming president Donald Trump takes on - and then opts for the less “politically correct” answer.

During the presidential campaign, Trump sanctioned torture, suggesting that he would bring back techniques like waterboarding and “much worse.” However, his pick to head the Department of Defense, Gen. James Mattis, is an opponent of harsh interrogation methods – preferring more humanitarian means such as building rapport.

Mitchell contends that rapport is more likely to work on regular jihadists, but that top-tier planners are ultimately counting on America’s political correctness – and going soft on them – to make the terrorists’ mission easier.

“Khalid Sheikh Mohammed (K.S.M.) really thought that Sept. 11 was a law enforcement matter that would get turned over to the FBI and would give him time to launch more attacks,” Mitchell, 64, told FoxNews.com. “He was stunned when Bush said, ‘No, this is a war.’ He would froth at the mouth talking about ‘that cowboy George W. Bush.’”

Mitchell and fellow psychologist Bruce Jessen were brought on as CIA contractors after 9/11 to devise and carry out the enhanced interrogation techniques (EITs) used on the most high-value prisoners, including chief 9/11 planner K.S.M. and senior Al Qaeda member, Abu Zubaydah. Mitchell spent countless hours with these prisoners at a number of CIA “black sites.”

He also stressed to FoxNews.com that the full closure of Guantanamo Bay, where the likes of K.S.M. and Zubaydah are being held, would be a mistake.

Mitchell recalled one afternoon “sitting around” with K.S.M. when the detainee admitted that while jihadist outfits do use Gitmo as a recruiting tool, if the off-shore prison were closed they would just find other fodder – such as “the treatment of Muslim women in Europe” or the “presence of infidels in the Arabian peninsula.”

But what most surprised him about K.S.M. was how “charming” and likable he could be.

Mitchell came under fire in late 2014 when the then Sen. Dianne Feinstein-led Senate Select Committee on Intelligence released an exhaustive report on interrogation techniques used on detainees. Feinstein called the program “a stain on our values and our history.”

However, Mitchell argues that the Senate “cherry-picked” documents to suggest that the CIA’s use of such harsh techniques was ineffective at collecting accurate intelligence.

In his experience, Mitchell said, the agency gathered useful information not during the duress of an actual EIT but in the moments in-between, when detainees knew what was awaiting them.

He also told FoxNews.com that the public unveiling of the indictment and banning of previously DOJ-approved techniques like waterboarding and sleep-deprivation plays into the terrorist playbook.

“It made us look divided, that we are weak,” Mitchell said. “It signals to them that there are people in our government who are only concerned about preserving the moral high ground. And K.S.M. did say that (Americans) don’t have the stomach to do what needs to be done, and that is what this signals.”

Mitchell has since sought to set the record straight about his involvement in the program and late last year released the book, "Enhanced Interrogation: Inside the Minds and Motives of the Islamic Terrorists Trying to Destroy America," written in conjunction with former CIA spokesperson Bill Harlow.

In 2015, two former detainees held at secret CIA prisons – Tanzanian Suleiman Abdullah Salim and Libyan Mohamed Ahmed Ben Soud – as well as a representative of Afghan citizen Gul Rahman, who died in custody likely from hypothermia, filed a lawsuit against Mitchell and Jessen for allegedly violating their human rights. The plaintiffs are seeking compensatory and punitive damages.

Human rights groups also have called for the contractors to be prosecuted.

While some CIA personnel may not have acted with government approval during interrogations, Mitchell said, he is adamant that he and Jessen are merely fall guys.

The lawsuit trial is slated to begin in June and if they are found liable, it would be the first time that a U.S civilian court has held any individuals accountable for widely condemned interrogation methods like waterboarding.

“And the irony of this is that the only two people who really tried to get Rahman medical care,” Mitchell stated, “were me and Bruce.”