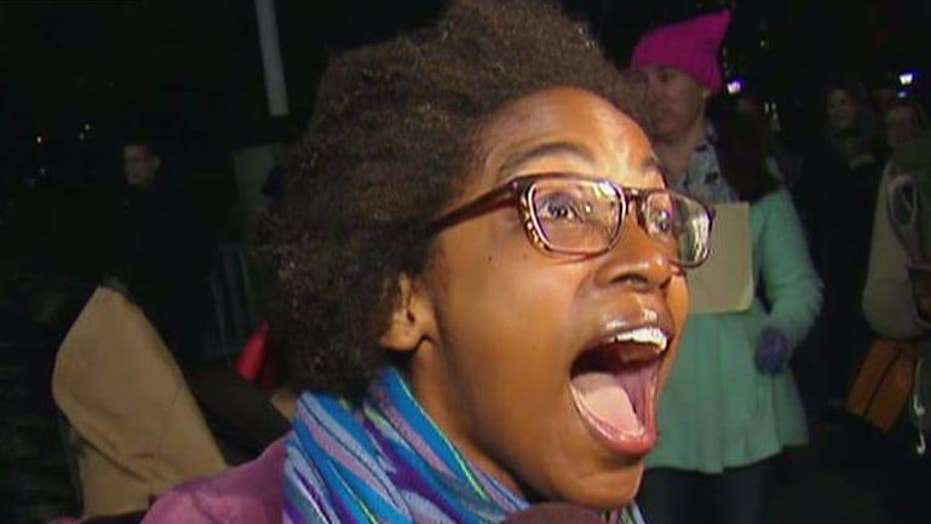 Liberals scream at sky on anniversary of Hillary's loss

Jesse catches up with protesters in New York on anniversary of President Trump's election.

From helpless cries to primal screams, liberals protested the one-year anniversary of President Trump’s election by huddling together in public spaces and howling from sea to shining sea.

A year after Trump's historic underdog win over Democratic presidential nominee Hillary Clinton, hundreds of anti-Trump protesters gathered in locales such as New York City's Washington Square Park for an event urging attendees to "scream helplessly at the sky."

Many attendees, at the end of a countdown, let out varied shouts, shrieks, screeches and yowls while standing in place, putting their heads back and crying out towards the sky.

The leftwing Refuse Fascism group, which is associated with the Revolutionary Communist Party, showed up with signs, drums and a host of chants.

ANTIFA, LEFT-WING ANTI-TRUMP PROTESTS NATIONWIDE TURNED OUT TO BE A DUD

A handful of Trump supporters greeted the end of the New York City scream with chants of “Trump! Trump! Trump!”

Diamond and Silk: Get behind your president and his agenda

The social media stars sound off on Trump opposition coming from both sides of the aisle.

Though some of the demonstrators risked losing their voice, they said they haven’t lost their way.

The screaming events originated in Boston, where anti-Trumpers gathered at the Boston Common to let out a communal cry. The event was titled on Facebook: “Scream helplessly at the sky on the anniversary of the election.”

And there were other forums, too.

About 30 anti-Trump activists in Eugene, Ore. took part in what they called “primal scream therapy” Tuesday, as reported by KLCC.

Philadelphia had a handful of screamers outside City Hall, a protest which concluded with chants of “F--- Trump.”

“We don’t want to scream helplessly at the sky,” protest organizer Samantha Goldman told Philly.com. “We want to scream like a pack of wolves [to bring down the administration]."