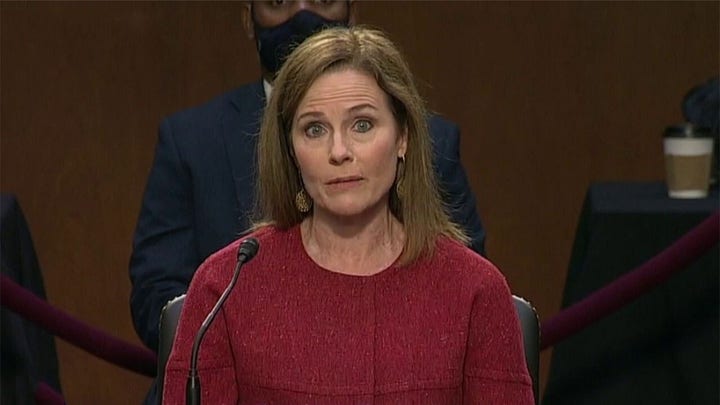 Barrett's professional responses and pleasant demeanor before the Senate Judiciary Committee have undercut the narrative pushed by Democrats that she is threatening or radical, said Jeffrey McCall, a professor of communication at DePauw University.

"Judge Barrett has had a most impressive day," McCall told Fox News. "It is clear she is bright and sincere. Her poise and pleasant personality make her a natural for the television cameras, which will also make it increasingly difficult for her opponents on the committee to trash her without themselves coming off as uncivil."

Barrett, 48, responded to scholarly legal questions with ease and did so without hesitation. She didn’t bring any files to the hearing and at one point held up a blank pad of paper to reveal she wasn’t relying on any notes at all.

Through hours of answrs, the even-keeled Barrett sought to reassure senators and the American public she would dispatch justice fairly and independently and she’d come to each case without any political agenda. CLICK HERE FOR MORE ON OUR TOP STORY.

Trump focuses on energy, fracking while attacking Biden at Pennsylvania rally
President Trump, speaking Tuesday at a campaign rally in the battleground state of Pennsylvania, warned that Democrat Joe Biden would destroy the state’s economy with his proposed energy agenda.

Speaking at Johnstown Airport, the president also took credit for his own actions in protecting steel and coal, both of which have historically contributed to the state's economy.

Both Biden and his running mate, Sen. Kamala Harris, D-Calif., indicated they would halt fracking in some way. But Biden has denied he would ban fracking.

"I know our Republican friends are trying to say I said that. I said I would not do any new leases on federal lands," he said. "Ninety percent of the leases are not on federal land, to begin with. I would make sure … the water is not being contaminated. But I would not shut it down, no." CLICK HERE FOR MORE.

Anchorage, Alaska, mayor resigns over sex scandal: 'I am deeply sorry'
Anchorage, Alaska, Mayor Ethan Berkowitz resigned Tuesday, a day after apologizing for what he described as a "consensual, inappropriate messaging relationship" with a local television anchor.

Berkowitz, 58, who is married, announced his resignation in a statement read by his chief of staff during a meeting of the Anchorage Assembly. The Democrat will remain mayor until Oct. 23 at 6 p.m.

“It is with profound sadness and humility that I resign as Mayor of the Municipality of Anchorage," the statement said, according to the Anchorage Daily News. "My resignation results from unacceptable personal conduct that has compromised my ability to perform my duties with the focus and trust that is required."

"I know my conduct has done great injury to my family, my staff, to Municipal employees, and to the people of our community, and for that, I am deeply sorry," the statement continued. CLICK HERE FOR MORE. 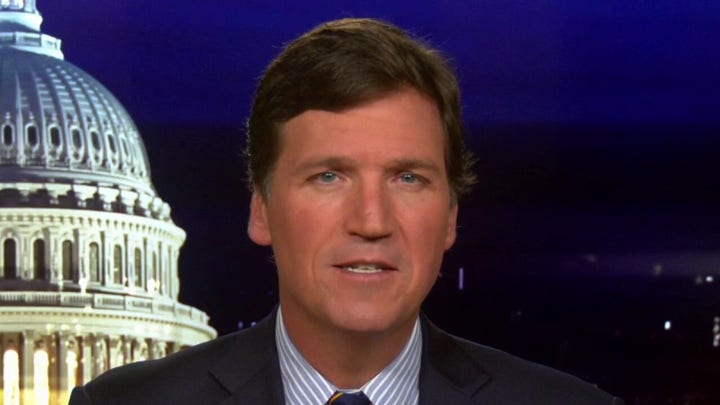 Tucker Carlson discussed the science behind wearing masks in public on “Tucker Carlson Tonight” on Tuesday night. Until recently, he said, wearing masks was illegal in many places, with the assumption being if you’re hiding who you are, you’re up to something bad and it made people nervous.

“What appears to be a flimsy cotton face covering is a holy amulet which protects us from disease more reliably than any modern medicine,” he said. “Science itself is harsh. Science has no regard for sentiment or public opinion. Science doesn’t care about your feelings. Science is about facts, data, measureable outcomes.”