Greg Gutfeld weighs in on Joe Biden's attempt to appeal to Hispanic voters at a campaign event in Florida.

In a video posted to social media, Masvidal – a 35-year-old Miami native born to a Cuban father and Peruvian mother – told UFC fans why he supports the president for a second term.

“The Democrats just think that they’re entitled to the Latino vote. They think that we just have to hand it over to them,” he said. “That’s right. We sure as hell don’t.”

Last weekend, Masvidal joined Donald Trump Jr., U.S. Sen. Marco Rubio, R-Fla., as well as other UFC stars on a “Fighters Against Socialism” tour that made stops in Tampa, Orlando, Coconut Creek and Miami in Florida.

Before one crowd, Masvidal claimed the Democrats haven’t produced the results for Latino communities that they have promised over the years.

CONOR MCGREGOR SAYS HE ACCEPTED OFFER TO FIGHT DUSTIN POIRIER: 'IT MUST HAPPEN IN 2020' 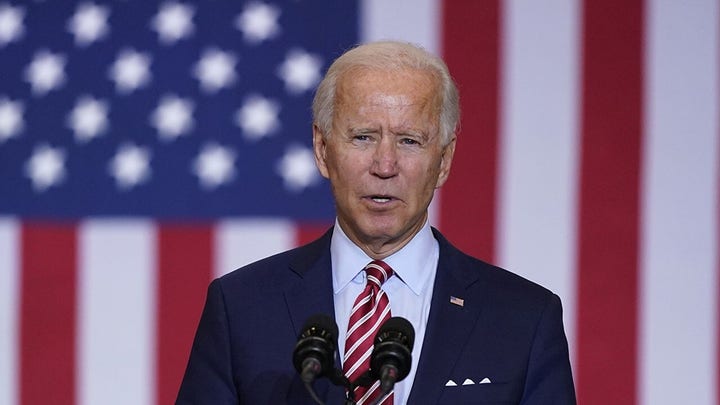 The fighter then took a shot at Biden, who in September drew criticism after a Florida campaign event in which he took out his cellphone onstage and blasted “Despacito,” the 2017 hit song by Latino recording artist Fonsi.

Masvidal accused Biden of pandering for the Latino vote.

“You know what else is not gonna work for them?” Masvidal said of Biden and the Democrats. “Playing ‘Despacito’ on your cellphone to pander to us. Hell no. You gotta give us some credit for having heads on our shoulders.”

“Biden panders to Hispanics. He did play ‘Despacito’ on his phone in a truly cringe-inducing moment. But who delivers real, tangible results?” Cortes wrote Oct.6.

Cortes then showed the Hispanic unemployment rates under the three most recent presidents.

“Under George W. Bush, one, uno month under 5%,” Cortes said. “How many under Obama and Biden? Zero. Big goose egg. How many under President Trump? Twenty-six. Twenty-six months under 5% jobless rate for Hispanic Americans. That's real prosperity.”

The Biden campaign has responded in part by launching a “microtargeting” strategy aimed at Salvadoran Americans in Georgia, Mexican Americans in Nevada and other groups, NBC News reported Tuesday.

In August, however, Biden took criticism for appearing to imply that the Latino community was more diverse than the Black community.

"Now what I mean full diversity, unlike the African American community and many other communities, you're from everywhere," Biden explained. "You're from Europe, from the tip of South America, all the way to our border in Mexico, and the Caribbean. And different backgrounds, different ethnicities, but all Latinos. We're gonna get a chance to do that if we win in November.”

According to the UFC’s Masvidal, the choice for voters in this year’s election is a clear one.

“We either re-elect President Trump and keep America great,” he said, “or we let Joe Biden destroy the greatest country the world has ever seen.”

Now, I’m a professional athlete and I’ve been one for most of my life so I’ve always seen things through a sports lens. That makes Donald Trump our head coach and before the global pandemic we were winning Super Bowls.

And when you’re winning Super Bowls, you don’t fire the coach. It doesn’t matter if you don’t like the plays he runs, the players he puts on the field, or what he says on Twitter.

You sure as hell don’t replace him for another coach who’s been in the business for 47 years at every level and never won a f---ing game.”

Fox News’ Evie Fordham and Joseph A. Wulfsohn contributed to this story.