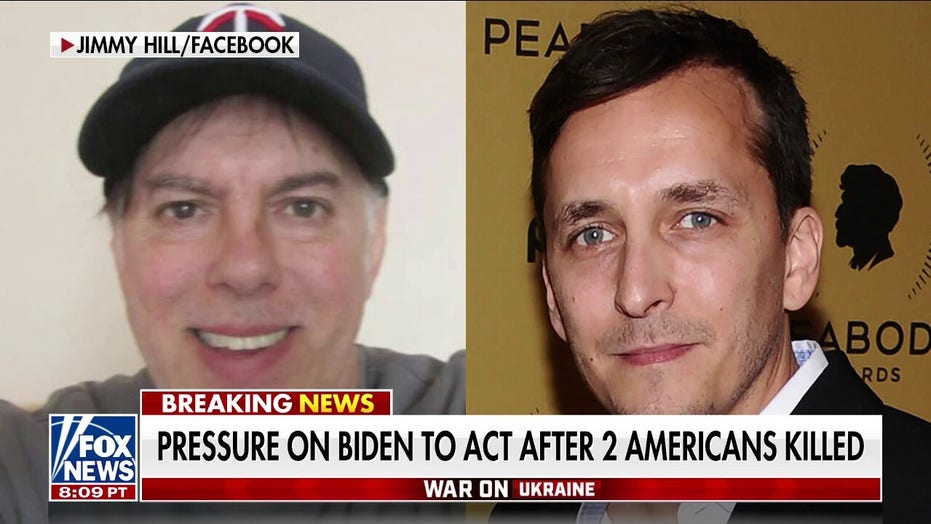 Fox News reporter Mike Tobin live in Lviv, Ukraine as attacks have moved west and another American was killed

From California to New York, elected officials, nonprofits, and local businesses have been collecting sets of body armor and millions of rounds of ammunition for Ukraine.

Colorado Gov. Jared Polis kicked off a campaign last week to ask police and sheriff’s departments to donate surplus ballistic helmets and other equipment. "We know that it can urgently be used to help stop Putin and save Ukraine," he said.

Colorado said during a short collection period, more than 25 state law agencies contributed more than 1,000 helmets and about 840 complete sets of body armor.

"In West Virginia, we stand up for what’s right, which is why we stand united with Ukraine in every way," Gov. Justice said. "Our incredible law enforcement officers throughout West Virginia are prepared to answer the call – they are well-stocked to be able to continue safely serving our people and communities throughout West Virginia, while providing this much-needed assistance to the Ukrainians who are bravely defending their home country against Russia. We hope and pray that this initiative will make a difference and that justice will win the day."

In Greenfield, California, the police department announced on Facebook that they would join in the, "state-wide call" and send 17 helmets and 15 ballistic vests to the California Office of Emergency Services which would ship them to Ukraine.

"We are extremely grateful to be able to help Ukraine defend their country," the department wrote in the post.

Gun businesses and nonprofits across the United States are also aiding Ukraine by sending tactical gear.

Adrian Kellgren’s family-owned gun company in Florida was left holding a $200,000 shipment of semi-automatic rifles after a longtime customer in Ukraine suddenly went silent during Vladimir Putin’s invasion of the country.

Fearing the worst, Kellgren and his company KelTec decided to put those stranded 400 guns to use, sending them to Ukraine's nascent resistance movement to help civilians fight back against a Russian military that has been repeatedly shelling their apartment buildings, schools, hospitals and hiding places.

"The American people want to do something," said Kellgren, a former U.S. Navy pilot. "We enjoy our freedoms, we cherish those things. And when we see a group of people out there getting hammered like this, it’s heartbreaking."

KelTec employee Bobby Cormier looks through lines of rifles, similar to ones being shipped to Ukraine, at their manufacturing facility on Thursday in Cocoa, Fla.  (AP/Phelan M. Ebenhack)

Cocoa-based KelTec's donation is a high-profile example of Americans collecting guns, ammunition, body armor, helmets and other tactical gear in response to Ukrainian President Volodymyr Zelenskyy’s promise to arm his citizens. But many similar grassroots efforts have been snarled by inexperience with the complex web of regulations governing the international shipment of such equipment.

Adrian Kellgren, director of industrial production of KelTec, holds a 9mm SUB2000 rifle, similar to ones being shipped to Ukraine, at their manufacturing facility on Thursday. (AP/Phelan M. Ebenhack)

Kellgren, who has dealt with such red tape for years, managed to connect through a Ukrainian neighbor with a diplomat in the Ukrainian Embassy who helped him secure a federal arms export license in just four days. That process can often take months.

This week, as Congress debated whether to send more advanced weapons and defense systems to Ukraine, workers at KelTec’s warehouse forklifted four plastic-wrapped pallets containing their 9 mm foldable rifles for delivery to an undisclosed NATO-run facility. From there, the shipment’s new recipient, Ukraine’s Ministry of Defense, will be responsible for smuggling the weapons into the war zone.

"That’s when the real derring-do and heroism begins," Kellgren said.

But hazards abound: One New York City nonprofit leading an effort to collect tactical gear had 400 bulletproof vests stolen before they could be dispatched.

Many of the organizers have no clue how to navigate International Traffic in Arms Regulations, or ITAR, which sometimes require approvals from the Departments of State, Commerce and Defense to ship even non-lethal tactical gear.

The National Shooting Sports Foundation, a trade group for firearms manufacturers, distributed step-by-step instructions this week to its more than 8,000 members on how to apply for an expedited export license. They also provided a list of specific sniper rifles, pistols and ammo requested by Ukraine’s Embassy in Washington.

KelTec hopes to arrange more shipments in the future. Its license allows the export of up to 10,000 weapons and the company has offered the Ukrainians their own production line and weekly shipments.

Details of KelTec’s efforts surfaced in a Justice Department filing this week by a Maryland-based real estate lawyer, Lukas Jan Kaczmarek, who said that as a volunteer with the Ukrainian-American Bar Association he is helping Ukraine acquire weapons in tandem with Volodymyr Muzylov, the first secretary at the Ukraine Embassy.

"I expect to work in this capacity for the duration of the Russian invasion of Ukraine, and I have not, am not, and shall not receive any monetary compensation for my assistance," Kaczmarek wrote in his registration as a foreign agent of the Zelenskyy government.

KelTec isn’t the only arms manufacturer to have answered the call.

Another Florida company, Adams Arms, posted on its Facebook account a video of what it said is a shipment of carbine rifles destined for Ukraine. The company has also started selling T-shirts emblazoned with the iconic final broadcast of a bombarded Ukrainian Border Guard unit that told a Russian warship to "Go (expletive) Yourself!" Proceeds from shirt sales will go to the Ukrainian National Bank’s war funds.

While rifles are no match for Putin’s firepower of Sukhoi fighter jets and cluster bombs, they can play an important role if the Russians get bogged down in street-to-street combat, retired U.S. Army Major John Spencer said.

The semi-automatic rifles KelTec is shipping are perhaps even more valuable than high-tech, anti-aircraft missiles that require extensive training beyond the reach of most civilians, many of whom have never even held a gun before, he said.

"Every shipment of firearms is critical," said Spencer, an urban warfare analyst at the Madison Policy Forum, a New York-based think tank. "You’re giving one more fighter, out of tens of thousands, the opportunity to resist with a simple-to-use weapon."

Kellgren said he’s been inspired by the resourcefulness and tenacity of Ukrainian citizens and is confident the rifles he’s sending will make a difference.

"The people of Ukraine have had mostly just civilian firearms and they’re holding off a superpower," he said. "So the X-factor here not isn’t necessarily what equipment you’re holding. ... It comes down to the will to fight."