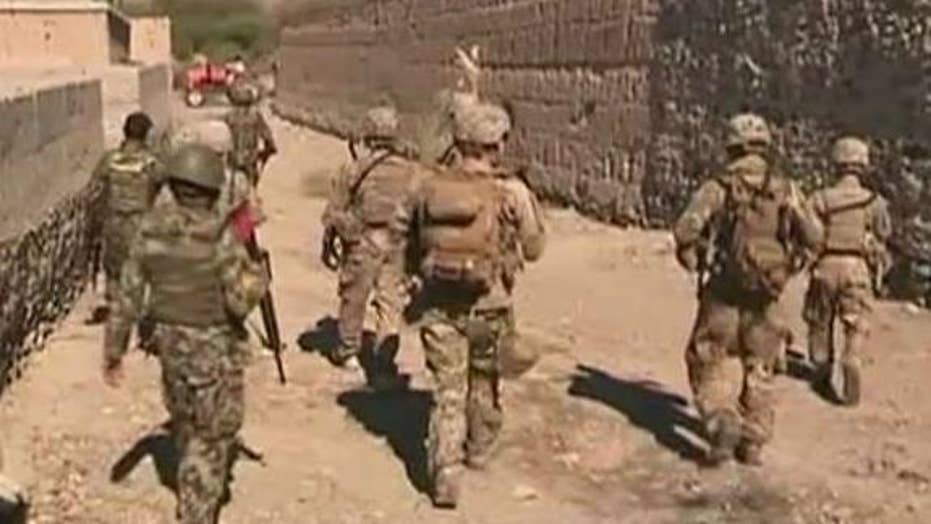 A U.S. contractor from Illinois was kidnapped by Taliban-associated militants in Afghanistan last week, prompting a nationwide search involving the FBI and State Department, according to a report.

Mark R. Frerichs, 55, of Lombard, Ill., was abducted last Friday in the province of Khost, U.S. officials, speaking under condition of anonymity, told Newsweek. The southeastern province borders the Federally Administered Tribal Areas, an underdeveloped region between Afghanistan and Pakistan.

U.S. officials believe the kidnapping was organized by the Haqqani network, an insurgent group once backed by the CIA to fight the Soviets that now aligns with the Taliban. The exclusive report in Newsweek, which was published Wednesday evening, had been held since Monday to allow for the search to progress further, the outlet said.

Afghan security forces arrive during a fight against Taliban fighters in Kunduz province north of Kabul, Afghanistan, Saturday, Aug. 31, 2019. The Taliban have launched a new large-scale attack on one of Afghanistan's main cities, Kunduz, and taken hospital patients as hostages, the government said Saturday, even as the insurgent group continued negotiations with the United States on ending America's longest war. (AP Photo/Bashir Khan Safi)

AFGHAN PRESIDENT: 3 TALIBAN TO BE RELEASED FOR HELD US, AUSTRALIAN

U.S. officials have been reluctant to confirm kidnappings, fearing the publicity may endanger anyone held captive. An unnamed U.S. official confirmed to Fox News an American was kidnapped in Afghanistan, but since he didn’t work for the Department of Defense “it is hard to understand his travels and behaviors.”

“We are aware of the reports. The welfare and safety of U.S. citizens abroad is one of the highest priorities of the Department of State. We have no further comment,” a State Department spokesperson told Fox News.

It was not immediately known how he was captured. Frerichs is a U.S. Navy veteran diver and managing director at International Logistical Support (ILS), an international shipping company contracted by the U.S. government. He’s been living, working and consulting in Afghanistan, Iraq, Sudan and other conflict zones over the past decade, according to his LinkedIn profile.

American forces have launched a ground-and-intelligence-gathering mission over the past few days to try to locate Frerichs. The search in part has been hindered by severe winter weather, which has prevented overhead drone surveillance and made it difficult to navigate the terrain.

The U.S. State Department partners with the FBI to assist in kidnapping negotiations. The U.S. special operation forces could be called in for a hostage rescue once Frerichs’ whereabouts become known, Newsweek reported.

The Hostage Recovery Fusion Cell, a multi-agency team based at FBI Headquarters in Washington, D.C., asked Newsweek to delay publishing the story about Frerichs.

"The welfare and safety of U.S. citizens abroad is one of the highest priorities of the Department of State," Holly Jensen, a spokeswoman for the Hostage Recovery Fusion Cell, told the outlet. "We have no further comment."

In November, an American peace envoy brokered a prisoner exchange. Afghanistan released three members of the Taliban-linked Haqqani network in exchange for an American and Australian abducted in 2016 and held captive for three years. An American identified as Kevin King, 63, and an Australian man identified as Timothy Weekes, 50, were both abducted at gunpoint outside the American University in Kabul where they worked as teachers, according to the Associated Press.

Secretary of State Mike Pompeo said the swap was a “goodwill gesture,” and President Trump said he hoped it would lead to a better deal with the Taliban.