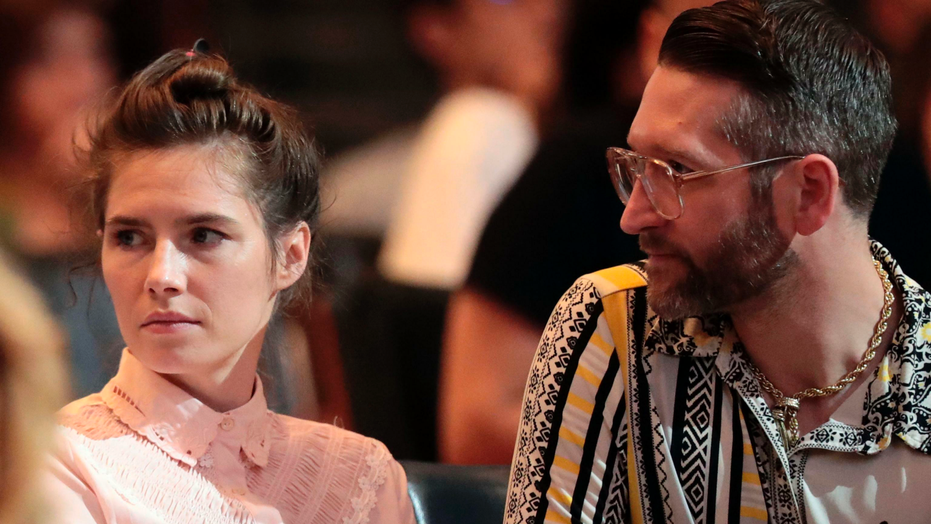 Newly released court documents revealed Amanda Knox and fiance Christoper Robinson were actually married in December despite recently setting up a public registry to solicit “donations” to help pay for a February wedding.

Documents filed in King County, Wa., obtained by The Telegraph, showed the pair applied for a marriage license on Nov. 21 and were officially married Dec. 7.

But on July 20, Knox posted a video to Instagram asking her followers to “check out” their non-traditional registry for their extraterrestrial-themed wedding. Once on the website, people were prompted to a page set up for donations.

“Let's face it, we don't need any more stuff. So please, no gifts, and no pressure. But if you feel so inclined, we welcome help putting on the best party ever for our family and friends!” a message from the couple read.

Amanda Knox and her fiancee Christopher Robinson attend a conference during a Criminal Justice Festival at the University of Modena, Italy, Friday, June, 2019. (Elisabetta Baracchi/ANSA via AP)

Among the list of possible gifts was a $2,000 donation for “temporal patron.” Guests were also asked to donate to defray the open bar and dinner costs.

But Knox, 32, fired back with a statement to the British outlet saying the winter paperwork was more of a formality than an actual wedding celebration.

“We filed paperwork to be legally married in December of last year to simplify our taxes and insurance,” the statement read. Meanwhile, the wedding set for Leap Day next year was meant to be a celebration “with our loved ones.”

It’s not clear if Knox or Robinson ever revealed they were legally married prior to Thursday’s reports.

Knox came under fire last month after she was accused of crowdfunding her wedding, but in her statement Thursday she said her recent trip to Italy to attend an event by the Italy Innocence Project set her back financially.

“The trip was a financial setback for us and we were forced to use funds we’d been saving for our wedding,” which she said included $10,000 on security measures and travel expenses.

She did admit, however, to also receiving a significant amount of money from the organization to attend the speaking event.

Knox’s trip to Italy in June was her first trip to the European country since she was acquitted of the murder and sexual assault of her British roommate, Meredith Kercher.

Amanda Knox hides her face from the cameras as she sits in a car after her arrival in Linate airport, Milan, Italy, Thursday, June 13, 2019.  (Daniel Dal Zennaro/ANSA via AP)

Knox and her former boyfriend, Raffaele Sollecito, were initially convicted in 2009 of Kercher's slaying in the hilltop university town. She was acquitted in 2011 on appeal after spending four years in custody, and she immediately returned to Seattle.

The murder conviction was reinstated in 2014, but she was finally, definitively acquitted in 2015 by Italy's highest court.