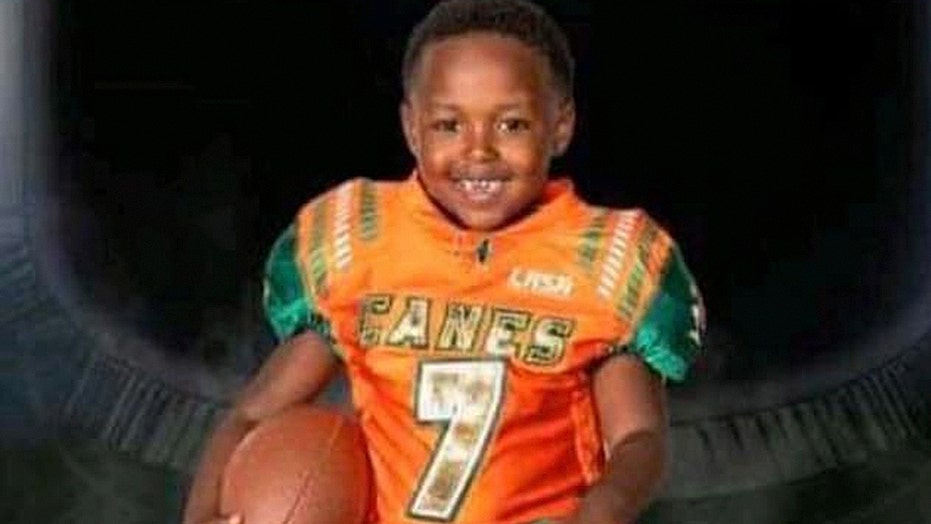 A 5-year-old Alabama boy was fatally shot when he got caught in the middle of a gunfight between two women on Saturday, police said.

Tanarius "TJ" Moore died from the shooting, which unfolded in Birmingham around 2:30 p.m. Two women, who are related to each other, began shooting at each other, leaving Tanarius hit in the crossfire.

It wasn't immediately clear if Tanarius was related to either of the women, one of whom was in custody as of Saturday, WBMA reported. Tanarius was pronounced dead at a nearby hospital later that day, according to officials.

The child had a "bright future," his football coach, Tabios Darden, wrote on Facebook. He said the boy had recently been named to the All-Star team and his death hurts even more knowing he's "gone because of a senseless act of violence."

"TJ was loved by all of the coaches and his teammates. He was the heart and soul of our defense, and we will honor him every time we take the field," the coach stated. "I’m proud to say I had the honor to coach him. I wish I had the words to express to his family but under these circumstances I don’t."

Darden said that while he's the coach of the youth football league, Tanarius "will not be forgotten."

"Hug your little ones...Tell them that you love them...Show them what love is...There’s a family right now that we all love that won’t get to do that anymore," he added. "I’m a strong believer in GOD and I know he will help us [get] thru this. He gained a special one today and I hope he knows that whoever was playing TJ’s position before he got there is headed to the bench."

OHIO BOY, 11, FATALLY SHOT AT BIRTHDAY PARTY: 'HE WAS A REAL GOOD KID'

Birmingham City Councilman William Parker told AL.com he rushed to the scene when he heard the news, describing the situation as "awful."

“We’re just in a state of shock. This is just horrible. I just don’t know any way else to describe it," he said. "We will embrace and uplift the community over the next couple of days and weeks and make sure this never happens again.

"A young man is not here with us and that is horrible. A young child is not going to be here for Christmas," the councilman added.

A unity walk in Tanarius' honor is scheduled to begin at Maclin Park at 6 p.m. Monday.