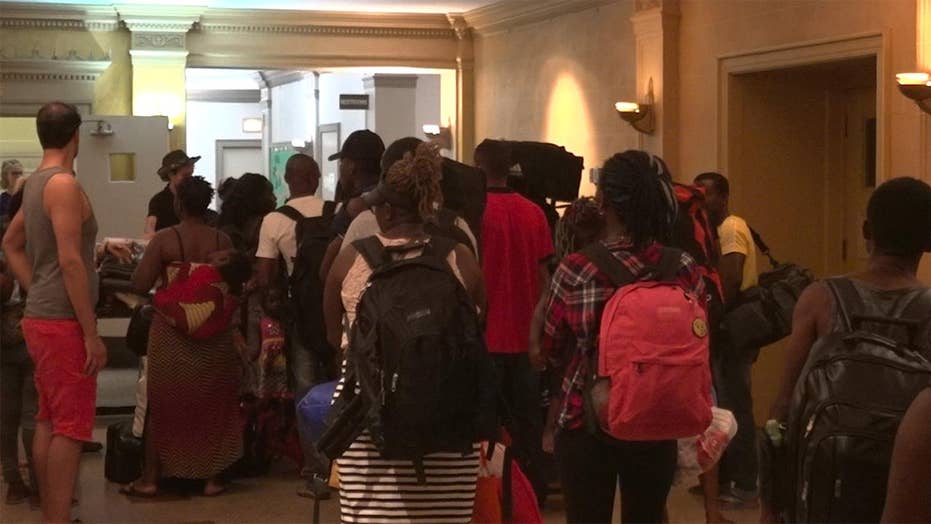 Many of the migrants are from the Democratic Republic of Congo, which has been mired in political instability and violence.

SAN ANTONIO, Texas -- Valerie and her son took a walk around this city’s downtown area on Monday after spending three months on a treacherous trek from Brazil, through Central America to Texas.

Valerie, a Congolese woman, fled her war-torn country with her family and is now trying to create a new life here.

“We left the Congo because there weren’t any resources for us…my son has really liked it here. I’ve liked it here, as well. It’s for this reason I’ve come here to figure out my life, to improve my life,” she said in French.

BORDER ARRESTS SKYROCKET IN MAY, AS OFFICIALS DECLARE "FULL-BLOWN" EMERGENCY

Many of the migrants stayed at Travis Park Church in downtown San Antonio before heading to different cities across the country.  (Fox News)

Valerie is one of hundreds of African migrants who arrived in San Antonio last week. City leaders said they weren’t given a heads up and quickly scrambled to accommodate them and quickly recruit several French-speaking volunteers who could serve as translators.

“The City of San Antonio has received more than 200 individuals, mostly families and children. The families were released by the United States Customs and Border Patrol into the country with paperwork directing them to Portland, Maine,” said Interim Assistant City Manager Dr. Colleen Bridger.

The majority of them stayed at Travis Park Church, which regularly hosts asylum seekers.

“I’m not necessarily surprised…we react to changes on the border every day, we just had to figure out that process it didn't really shake us up too much,” said Gavin Rogers, associate pastor.

It's not just Congolese migrants arriving in alarming numbers. Border Patrol agents reported arresting more than 500 people from Africa since May 30. The group included nationals from Angola, Cameroon, the Republic of the Congo, and the Democratic Republic of the Congo.

Border Patrol agents in the Del Rio Sector say they've arrested more than 500 migrants from Africa since the end of May.  (Border Patrol)

While Border Patrol has previously seen migrants from Africa, this is the first time they have seen such a large group crossing together.

“It really has been a bit of an anomaly for us,” said Del Rio Sector Chief Patrol Agent Raul Ortiz. “I think most of them, you know, obviously are flying to different locations. And then, when they find themselves congregating in a location then they start to formulate a plan just south of the U.S. Mexican border here."

For years, people from the Congo and neighboring countries have fled to escape political instability and violence. According to the UN Refugee Agency, 4.5 million people from the DRC have been displaced. But the numbers seem to be increasing and officials in border towns are struggling to keep up.

Unlike most Mexicans and Central Americans, many of the migrants from Africa don't have roots in America or families who can take them in once they are released from immigration detention. And many speak languages the immigration officials do not.

“Quite often, the individuals from the African continent do not have a permanent address or a sponsor already in the U.S. And so you really just have to pinpoint an immigration court near where they think they are going to ultimately end up and hope that they report themselves in,” said Ortiz.

The city says it will continue to work with Travis Park Church, Catholic Charities, and other non-profit organizations to find long-term resources for these migrants.  (Fox News)

Over the weekend, the city, along with Catholic Charities, worked with the asylum seekers to figure out their next destination as many arrived without designated host families and cities.

“If we don't know exactly the best place to send the migrant community like the Congolese. We have to figure out what shelters are available around the nation, where's the best place for their community to go,” said Rogers.

There was also concern that some of the migrants could carry diseases, as there is currently an Ebola outbreak in the Democratic Republic of Congo.

However, Bridger quickly shut down those rumors, telling local reporters that the migrants go through multiple health screenings.

"It's a 21-day incubation period so it's really not possible that, if they were exposed to Ebola in the DRC, that now, six months later, they develop symptoms and infect us," Bridger said.

By Monday, the majority of the migrants had left on buses, heading to cities where they may have friends or family members. The line outside the city’s Migrant Resource Center downtown had dwindled.

But, if more come, Rogers said they’ll be ready.

“We’re a church always willing to serve our neighbors," Rogers said. "We'll continue to do so whether that's with migrants or the homeless or a new need that will crop up in the future.”