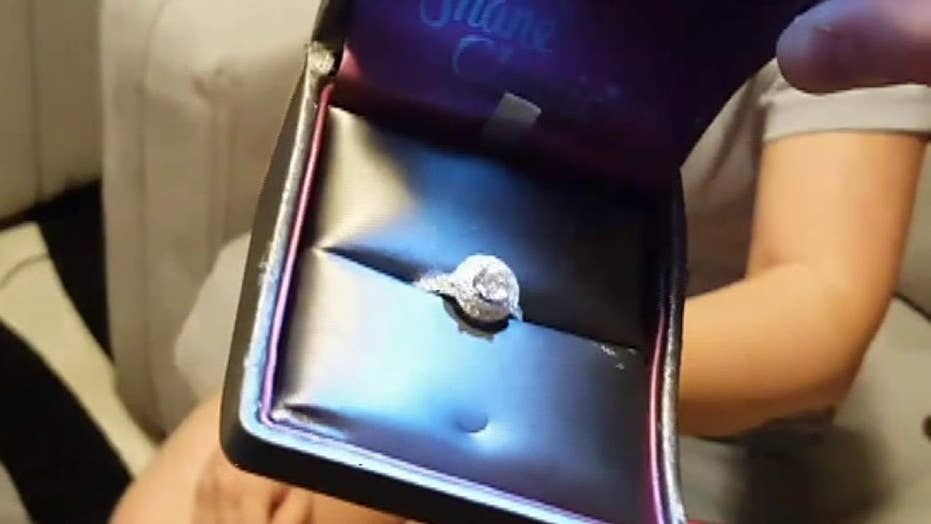 Raw video: Woman finds out that her husband has found her lost engagement ring

Drew Huskey of Wildwood, Missouri filmed the moment that he returned his wife's lost engagement ring.

Drew Huskey and his wife, Qian “Emily” Yang of Missouri, were on vacation in Canada when her wedding ring slid off and landed in about two feet of snow.

She thought she would never see the ring again, but her husband was secretly on a mission to retrieve it.

Huskey and his wife have been married for three years and live in Wildwood, Mo., in St. Louis County. They went to Canada on vacation about eight months ago and it was during that trip that his wife lost her ring. Approximate value: $10,000.

The loss occurred on Oct. 2, 2018, Huskey told Fox News: They were driving on a mountain between Banff National Park and Jasper National Park in Canada during a snowstorm when they got stuck behind a crash.

A two-hour ride stretched out to 11 long hours, and as traffic started moving once more, his wife called for a restroom stop.

“She gets out of car and falls into two feet [of] snow,” Huskey told Fox News. It was as she got up and brushed the snow off that she felt the ring leave her finger and go flying.

Snow on the mountain in Canada where Qian “Emily” Yang of Missouri lost her wedding ring.  (Drew Huskey )

With bare hands and a tiny ice scraper, they searched for three frigid hours, to no avail. But Huskey also thought to himself, “I am coming back here to look for the damn ring.”

“My wife now hates Canada because of losing her ring there,” he said.

Huskey had a strategy, though, for reuniting his wife with her ring. He soon started asking people in the area when the snow is expected to thaw out on the mountain.

As soon as he got back home, he looked at his calendar and decided he would go back to Canada on May 31st to try and retrieve the ring.

He said he spoke with his co-workers about what had happened; one mentioned a website called “The Ring Finders,” which offers an online directory of "metal detecting specialists" who help hunt for lost jewelry around the world.

“I contacted the only person anywhere close to where the ring had fallen. And he was about two hours away. His name was Syd Kanten,” Huskey said.

“It was funny because at first I didn’t ask if he could help me find it, I just asked for his advice. ‘I plan on buying a metal detector, I plan on going back, what should I be worried about?’ And I asked him about how the weather is typically that time of year and he was kind of taken aback because he was like, ‘Someone usually hires me to go look for it, they don’t usually go back and look for it themselves.’”

Huskey said Kanten offered to help him look for the ring if Huskey was willing to cover the cost of gas.

The two finally met eight months later and Kanten brought his son Tyler to help them look for the ring.

Huskey told his wife he was going on a trip to Montana and kept the recovery mission a secret from her.

Huskey said after searching for two hours, Tyler’s metal detector died. He said Tyler went to get more batteries for the metal detector and as he was walking to get the batteries, “he looks down and sees something shining. He bends down, picks it up and says, “Oh, is this the ring we are looking for?'”

“I just lost it," said Huskey.

“I was in total disbelief that we found it in just two hours of searching,” he added.

Huskey said as soon as he got back to Missouri, shortly after the couple's three-year anniversary, he went to get the ring cleaned.

“That night I put it back in its original box and set it right next to the couch and typed up the entire confession, letting my wife know the trip was really me going to Canada to find the ring that she had lost,” he said.

Huskey said he took a video of his wife reading the confession, which captured her emotional reaction.

“I bent down next to the couch opened the box and let her see it and that’s when she just loses it,” he said.

“She sobbed for about an hour and then she ran upstairs and immediately called her mom in China to let her mom know what I did because I kept this a secret from everyone, that I was fleeing the country to find my wife’s wedding ring,” he added.

The husband says he and his wife will take steps to make sure she doesn't lose her ring again. (Drew Huskey)

“It was amazing. Every bit of it was just amazing,” Huskey continued.

When asked what his wife plans to do now that she has the ring back Huskey answered, “We have an appointment this weekend to go to Shane Co. and get what’s called ‘sizing beads’ put on the ring so basically it won’t slide off again or anything like that.”