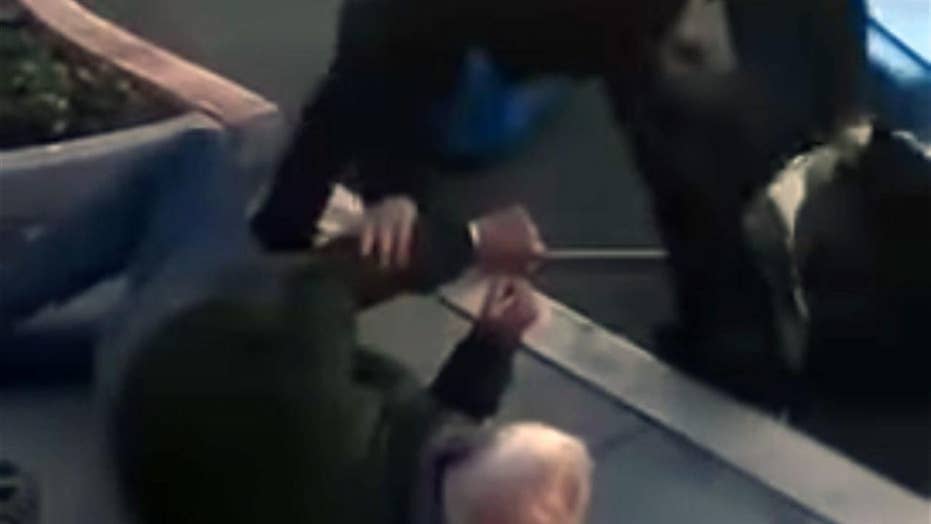 An 85-year-old pro-lifer was attacked while praying outside of a San Francisco Planned parenthood.

An 85-year-old pro-life man was assaulted as he prayed outside a Planned Parenthood abortion clinic in San Francisco last Thursday and it was captured on camera.

In the 22-second clip, an alleged Planned Parenthood supporter knocks the pro-life advocate, identified as Ron, to the ground, tells him to stay on the ground, then repeatedly kicks him as he tries to take away the "40 Days for Life" banner for which Ron was peacefully protesting.

"I tried to keep him from taking it and that was it," Ron told the NBC affiliate in the Bay Area. "Then he knocked me down and kicked me."

The San Francisco Police Department is investigating the incident as an assault.

Ron said this is the third time the same man harassed him or tried to steal the sign in a week.

Donald Trump, Jr. tweeted out the video Thursday with the caption: "Help find this piece of garbage."

Life Legal Defense Foundation, who is representing the elderly victim, said the same assailant had attacked Ron and another man just two days prior.

Allison Aranda, Life Legal senior counsel, called the vicious attack "intolerable" and said she will make sure "justice is served and that the freedom to speak freely on the public sidewalk without threat of physical violence is protected no matter the message."

Although fearful for his safety, Ron is back in front of the clinic praying, with bruises. He has been leading the anti-abortion prayer campaign in San Francisco for many years.

"Over the past few months, we have seen an increase in violence from abortion supporters in an effort to instill fear and deter our law-abiding volunteers," Shawn Carney, the president of 40 Days for Life said, adding "that the idea that San Francisco is tolerant is a joke."

Planned Parenthood allegedly has video surveillance of the area which could include the attacks, but reportedly is unwilling to release the video or assist in the investigation. The pro-life group has said there has not been a police presence at the abortion clinic despite the attack.