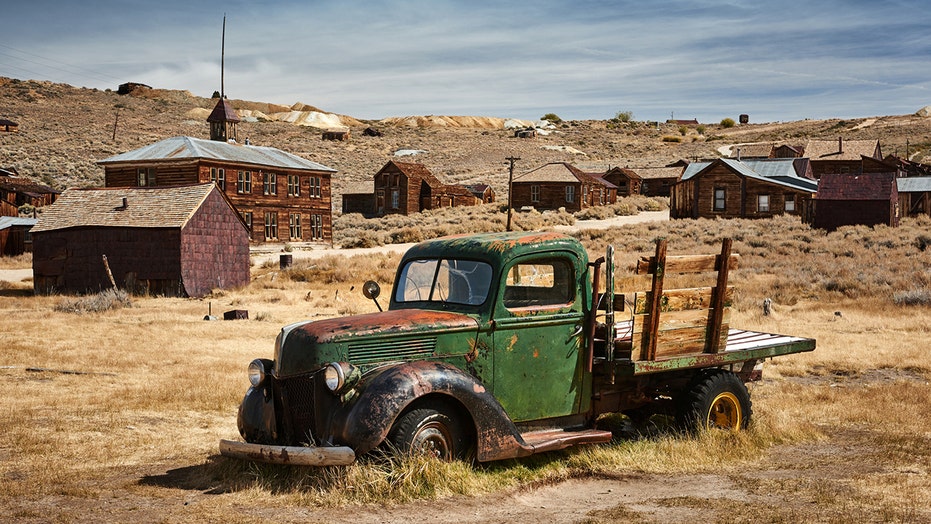 Some American towns that were once booming centers for industry and trade have become effective ghost towns, left abandoned and rotting as remnants of bygone eras.

These towns can be found throughout the country, from Pennsylvania to California and Alaska. They may have thrived as mining towns or promising state capitals before being stricken by economic hardship or disaster.

WHAT ARE THE 5 MOST POPULOUS US STATES?

Here’s a look at five such towns:

The coal-mining town of Centralia, once home to 2,700 people, was built in the 1850s after a rich deposit of anthracite coal was discovered.

The underground fire in Centralia has burned since 1962. The intense heat ruptured the earth and leaked dangerous smoke and gases into the community. Experts say the fire may burn for another century.

But in 1962, a raging underground coal fire spread beneath the town after municipal employees tried to burn trash at a garbage dump and ignited an exposed coal seam, according to History. The fire still burns beneath the town today.

Over the years the extreme heat opened fissures in the ground that leaked dangerous levels of smoke and carbon monoxide, forcing the government to issue evacuation orders in 1981. A decade later, all real estate was claimed under eminent domain and condemned by the state.

Now, only about seven holdouts remain in the ever-burning ghost town, according to WNEP-TV. When they die, the property will be given to the government.

A gold mining settlement on the eastern edge of Death Valley, Rhyolite was booming when it was built in 1904. The gold rush attracted as many as 10,000 people to the town. Industrialist Charles M. Schwab purchased a mine and invested in the town’s infrastructure, according to the Las Vegas Review-Journal.

The last train pulled out of Rhyolite in 1914, and the power was shut down two years later.

Rhyolite reached its peak in 1907 when the financial panic signaled its downfall, according to the National Parks Service. Mines closed and banks failed over the next few years. In 1916, the lights and power were turned off. The town was used as a movie set for Old West films in the 1920s.

Now, only a few intact buildings remain as relics to the town’s once-prosperous past, including three walls of a bank, part of a jail, the train depot and a building known as the Bottle House.

The Civil War-era town of Cahawba served as Alabama’s first state capital from 1819 to 1826, and is known as the state's “most famous ghost town.”

Cahawba's population dwindled after a major flood and the county seat's transfer to nearby Selma.

The thriving antebellum river town was a major distribution center for cotton, and was home to 3,000 people before the Civil War, according to a website detailing its history and legacy. During the war, 3,000 captured Union soldiers were held in a prison at the center of town. It later became a short-lived village for freed slaves after the war.

Citizens and businesses slowly abandoned the town in the late 1860s after a major flood and the removal of the county seat to nearby Selma.

Now known as Old Cahawba Park, all that remains are the abandoned streets, moss-covered ruins of buildings and cemeteries, and the tale of an apparition called “Pegues’ Ghost,” which was known to appear at parties during the town’s height.

The gold mining town of Bodie was established in 1859, and grew from just 20 miners to a boomtown of an estimated 10,000 people by 1880, according to the California Department of Parks and Recreation.

Bodie was settled by William "Waterman" S. Bodey in 1959.

It has been reported the town once held 65 saloons, numerous brothels and “houses of ill repute,” gambling halls and opium dens for its colorful crowd of gunfighters, robbers, prostitutes and miners from countries around the world, according to a website dedicated to the town.

A major fire ravaged Bodie in 1932, destroying much of the town. It has remained untouched for decades.

Today, California State Parks preserve the remains of Bodie in a state of “arrested decay” for tourists and an occasional ghost, according to the parks department.

The copper mining town of Kennecott was established in 1903, and by 1938 it was mined out and deserted.

The copper mining town of Kennecott thrived for just over three decades until the last of its five mines were tapped out.

During its heyday, the Kennecott Mining Corp. established its five mines as models of state-of-the-art technology and progressive management, even paying workers higher salaries than anywhere in the lower 48 states, according to Alaska.org.

The giant red mill building used by the company still stands today, towering 14 stories above the Kennicott glacier (a clerical error on official paperwork accounts for the two different spellings).