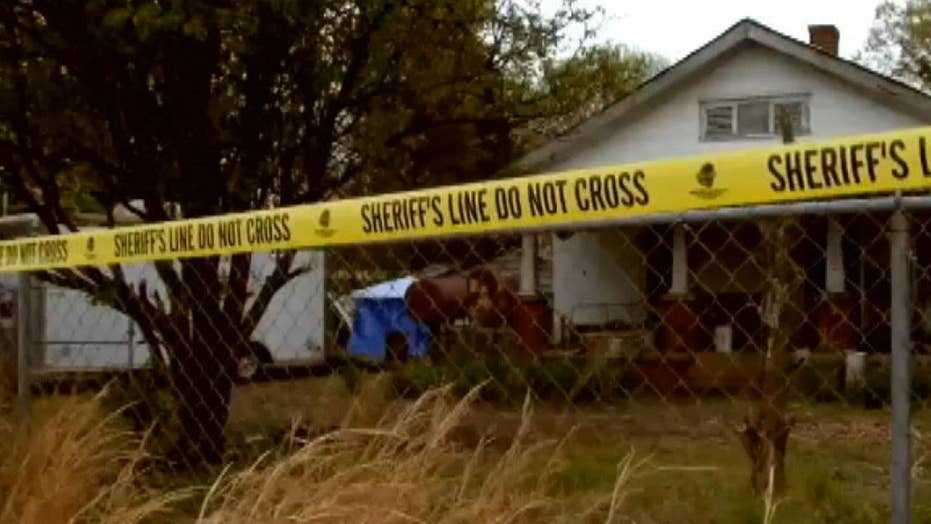 Two men have been arrested in connection with the deaths of two women after their bodies were discovered Friday on a property in South Carolina.

Two men have been arrested in connection with the deaths of two women after their bodies were discovered Friday on a property in South Carolina after one of the suspects confessed from a hospital bed to killing one of them after an attempt on his own life, officials said.

The Spartanburg County Sheriff's Office said on Facebook that Jonathan Galligan, 39, and Christian Hulburt, 41, were arrested and charged with murder Saturday after the bodies of 27-year-old Christin Renee Bunner and 40-year-old Melissa Fairlee Rhymer were discovered on the property of a home in Spartanburg.

"I cannot imagine somebody coming in telling me that they found my child," Sheriff Chuck Wright told FOX Carolina. "Especially in the condition that they were in."

Authorities were alerted to the bodies at the home from an incident earlier in the week between deputies and Hulburt when they were called to a towing company Wednesday night on a report of a disturbance involving a man with weapons.

Christian Hulburt (left) and Jonathan Galligan (right) were arrested and charged Saturday with the killings of two women after their bodies were discovered buried on a property in Spartanburg, S.C., on Friday. (Spartanburg County Sheriff's Office)

When officers arrived, Hulburt would not comply with commands and eventually pulled out a gun and shot himself in the head in front of deputies, police told FOX Carolina.

After being taken to a hospital and surviving the gunshot wound, Hulburt confessed at the hospital to officers that he had witnessed Galligan kill Bunner at the towing company before helping him bury her behind a home in Spartanburg. Bunner had been reported missing in December, and was Galligan's girlfriend at the time, according to police.

The bodies were discovered on the property of a home in Spartanburg, S.C. on Friday after Christian Hulburt confessed to murdering one victim and burying the body there. (FOX Carolina)

Officers tried to initially find the burial site on Thursday to no avail before returning Friday morning with cadaver dogs and interviewing Galligan about Bunner's missing person case. The sheriff's office said that Galligan immediately asked for an attorney, and was released because there was not enough evidence at the time to charge him.

The bodies of Christin Renee Bunner (left) and Melissa Fairlee Rhymer (right) were discovered on the property of a home in Spartanburg, South Carolina on Friday. (Facebook)

When investigators returned to the hospital to speak with Hulburt, he confessed there was a second woman buried on the property as well. That woman, later identified as Rhymer, was killed at the home sometime in January 2019 and buried near Bunner's grave, police told FOX Carolina.

After providing additional details to where the bodies were located, cadaver dogs at the home eventually found where the remains of the two women were located. Rhymer of Mountville, S.C., who was not reported missing, was identified by fingerprints at a morgue.

A neighbor told FOX Carolina that three men and a woman lived at the house where the bodies were discovered but had not been seen in weeks.

"I didn't even know that was going on, not next to us because they didn't bother nobody when they were staying there," the neighbor said.

Hulburt was released from the hospital Saturday afternoon, shortly after Galligan was taken into custody. Both appeared before a judge for a bond arraignment Saturday night, where they were both denied, WYFF reported.

A neighbor said he had not seen anyone at the home in weeks. (FOX Carolina)

Galligan is charged with murder for Bunner's homicide and accessory after the fact for Rhymer's killing, according to jail records online. Hulburt is charged with murder for Rhymer's slaying, accessory after the fact for Bunner's homicide, in addition to unlawful possession of a pistol by a convicted felon for the incident at the towing company.

Autopsies are now scheduled on the bodies of both women to determine a cause of death. Sheriff's officials said they believe there are not anymore suspects in connection with the two killings or any more victims on the property. Deputies added they do not have a motive for the killings of Bunner and Rhymer.