Although alleged victims’ families and their supporters warned about California Democratic activist and megadonor Ed Buck for two years as they tried to get prosecutors to bring charges, their pleas weren’t heard.

Prosecutors declined to bring charges a year after a first man died in Buck's apartment, but another investigation began after a second man died. In July, deputies approached a federal-state task force on opioid overdoses, which agreed to take the case, Drug Enforcement Administration spokesman Kyle Mori said.

Attorney Ambrosio Rodriguez, a former Riverside County prosecutor, said it was unusual for federal prosecutors to take over a state investigation. He said he didn’t buy District Attorney Jackie Lacey statements about a lack of admissible evidence, calling her explanation for passing the case to federal prosecutors “disingenuous.”

Lacey has defended her decision not to bring a case sooner or file homicide charges. She said there was insufficient evidence to charge Buck in the deaths, saying it made more sense to proceed with a federal prosecution that would bring a minimum 20-year sentence if he’s convicted.

Lacey denied that Buck, who had given her a $100 donation that she later returned, received any favoritism. She said investigators didn’t have the necessary witnesses to make an arrest until the latest victim provided the account that gave them their big break.

“We did not have other victims that were willing to talk to the prosecutors to tell us what happened, to tell us they were injected by Mr. Buck,” Lacey said.

In this Wednesday photo, LaTisha Nixon, second from right, talks about her son Gemmel Moore, one of the men who died in the apartment of Democratic donor Ed Buck, at a news conference in West Hollywood, Calif. (AP Photo/Brian Melley)

“I said it the last time we were down here that there’s going to be a third victim,” said LaTisha Nixon, whose 26-year-old son, Gemmel Moore, was the first to die. “We said there’s gonna be a second victim. We kept saying it because we all knew ... Ed Buck didn’t stop doing what he was doing.”

Nixon and her supporters welcomed the arrest but criticized the time it took to put Buck behind bars and renewed their questions about whether a wealthy, white Democratic donor benefited because the victims were mostly gay black men and drug users, some of whom were sex workers and homeless.

Buck, 65, was arrested Sept. 17 after the third man was hospitalized for an overdose.

Buck is being held without bail and has yet to enter a plea in either case. His attorneys declined to comment, but one defense lawyer, Seymour Amster, previously said Buck denied any role in the deaths of Moore or Timothy Dean, 55, who overdosed Jan. 7.

Moore was found naked on a mattress on Buck’s living room floor on July 27, 2017. Two dozen syringes and five glass pipes were found, along with meth stored in a toolbox with sex toys.

Buck has donated tens of thousands of dollars to California candidates, including Democratic Gov. Gavin Newsom, and is well known in LGBTQ political circles.  According to federal records, Buck contributed more than $500,000 to Democratic groups, including $1,500 to Barack Obama's presidential campaign and $2,950 to the Hillary Clinton campaign.

When Moore was carried out of Buck’s apartment two years ago, members of the gay political club he lavished with thousands of dollars in political donations swiftly ousted him.

Buck attempted a comeback in early January, less than six months after prosecutors declined to bring charges in the overdose death. He tried to crash the Stonewall Democratic Club’s holiday party at a Los Angeles-area wine bar, telling members he had been exonerated, club president Lester Aponte said.

“When somebody dies at your house, wouldn’t you think that’s the kind of event that will make you reexamine your life choices?” Aponte told The Associated Press. “It doesn’t seem like it registered with him at all.”

Two days after Buck was escorted out of the bash, another gay man was found dead in his West Hollywood apartment — again from a methamphetamine overdose.

The federal criminal complaint, however, said eight men had provided harrowing accounts about encounters with Buck before the latest alleged victim survived overdosing twice in a week this month. That man said he lived with Buck for weeks this summer and Buck regularly injected him with meth.

Several of those men said Buck encouraged them to take drugs or injected them himself — some against their will and others who said they woke up to being injected or suspected they had been given a powerful drug before passing out.

One man, who was homeless and worked as a prostitute, told investigators in March that Buck was known as Dr. Kevorkian, a reference to the late doctor who'd been imprisoned for helping terminally ill patients end their lives. The man said Buck injected him twice with meth in 2011 and he lost consciousness each time.

“Buck insists on injecting prostitutes with methamphetamine and ... would dismiss anyone who would not permit it without compensation,” according to an affidavit by Drug Enforcement Administration agent John Mundell.

Lacey, the district attorney, said witnesses were reluctant or had “lawyered up” and wouldn’t speak, while others didn’t have firsthand encounters with Buck.

Cannick, the communications strategist, and two lawyers representing Moore’s mother in a lawsuit against Buck, the district attorney and the sheriff’s department, disputed the prosecutor’s assertions. They said they accompanied victims mentioned in the criminal complaint to interviews with sheriff’s deputies and provided text messages, photos, videos and receipts of electronic payments Buck made. 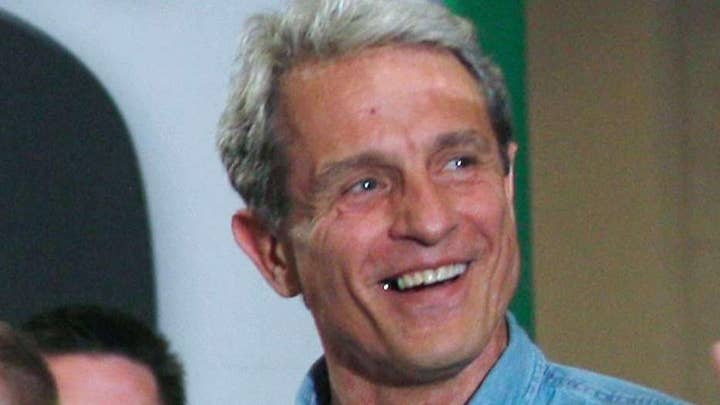 The witnesses all spoke with Los Angeles County sheriff’s investigators, who consulted frequently with county prosecutors, said Lt. Derrick Alfred, who oversaw the team of detectives who investigated Dean’s death. He said the activists were integral by finding witnesses.

Moore’s death was originally listed as an accidental overdose. A criminal investigation wasn’t launched for about three weeks, after Cannick said she published excerpts from a journal Moore kept that said he had become addicted to drugs and “Ed Buck is the one to thank.”

Before Buck could be charged in federal court, investigators learned of the latest overdose and finally made an arrest.

When Buck was taken into custody, “he acted confused, seemingly wondering why we were there and what was going on,” Alfred said.

A small crowd, including Cannick, gathered across the street from the building where protesters had once posted signs saying, “Justice 4 Gemmel” and “Ed Buck is a Predator!”

Within a week, an eviction notice was posted on Buck’s door. It cited the illegal drugs and the deaths of two men found inside.