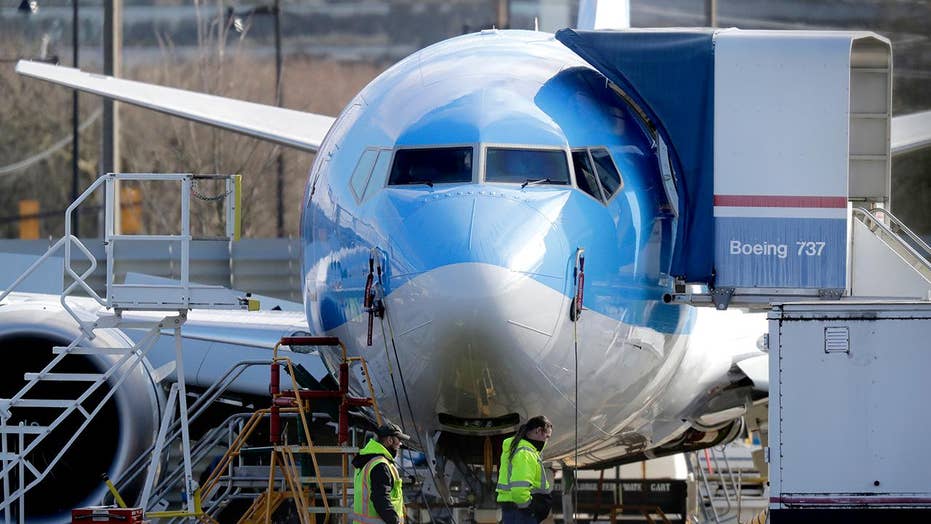 Boeing under pressure as its 737 Max aircraft sit idle

Doug McKelway reports on the economic impact to the world's largest aerospace company from the grounding of its best-selling plane after two fatal crashes.

The CEO of Southwest Airlines said Wednesday that while he is unsure exactly when the Boeing Max aircraft will be returned to service, he is “hopeful it will be this summer.”

The Dallas-based carrier held their annual shareholders meeting in Denver and, as the Denver Post put it, “there was an elephant the size of a 737 inside the conference room.”

The carrier was forced to ground 34 MAX aircraft – roughly 5 percent of its active fleet – in the wake of the fatal Lion Air and Ethiopian Airlines crashes involving Boeing 737-8 MAX planes. The planes now sit in a California desert while federal regulators investigate the aircraft’s flight control systems, according to the Post.

For the time being, Southwest has removed the Max planes from its flights scheduled through Aug. 5. (Getty)

“I do not know when the Max will be returned to service. I am hopeful it will be this summer,” Southwest CEO and board chairman Gary Kelly said at the Wednesday meeting. “We’ll assure ourselves, of course, that it’s safe before we return it to service and in the meantime, we’ll continue to offer one of the strongest, if not the strongest route networks in the continental U.S.”

“I think more fundamentally though, we believe the Boeing 737 Max 8 is the best airplane in the narrow-body market,” he continued. “It gives us the best customer experience as well as the best economics. And we have close to 10,000 pilots who are expert in operating the Boeing 737.”

For the time being, Southwest has removed the Max planes from its flights scheduled through Aug. 5, Bloomberg reports.

Moving forward, on May 23, the FAA will host some of the world’s leading civil aviation officials for a meeting in the Dallas-Fort Worth area to discuss the grounded Boeing 737 Max to garner insight on “its decision to return the 737 Max fleet to service in the U.S. when it is made,” as per Reuters.

Last week, Ethiopian Airlines CEO Tewolde Gebremariam announced that his carrier will be the “last to fly” the Boeing 737 Max planes again after a deadly crash of a Boeing 737-8 Max plane in March killed all 157 people onboard. If Ethiopian Airlines decides to ever fly the aircraft again, Gebremariam detailed, the carrier will wait until other airlines use the plane first.

In October, another Boeing 737 Max 8 – operated by Lion Air – plunged into the Java Sea just minutes after taking off from Jakarta, Indonesia. All 189 people on board were killed in the crash.

Boeing spokesman Charles Bickers told the Chicago Tribune on May 13 that the company "is working closely with pilots, airlines and global regulators to update the Max and help prevent this tragic loss of life from happening again."

Three days after the Ethiopian Airlines crash, the FAA ordered the Boeing 737 Max 8 and 737 Max 9 models to be temporarily grounded in America. The agency said the decision was made to ground both jets "as a result of the data gathering process and new evidence collected at the site and analyzed."

"The grounding will remain in effect pending further investigation, including examination of information from the aircraft's flight data recorders and cockpit voice recorders," the FAA said at the time.

The CEO of American Airlines, too, agreed that his carrier "will have 100 percent certainty that airplane is safe” by the time that the aircraft is recertified by the FAA and actively flying again.

"Our focus right now is working with the regulators and our pilots and with Boeing to get to a point that we all feel comfortable the aircraft is safe, it won't be flying until everyone is comfortable about that," Parker said. CEO Doug Parker recently told Business Insider.