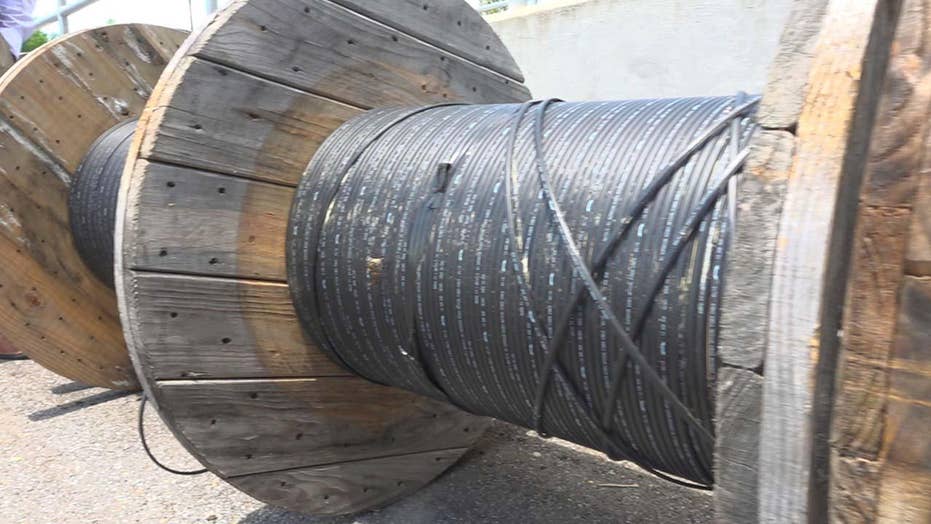 As more states rely less on major telecommunication companies to provide the infrastructure needed to offer high speed internet in rural areas, some states are turning to electric co-ops to get the job done.

HAMILTON, Ala. -- As anticipation grows for 5G technology to be rolled out in big cities, nearly 15 million people in rural pockets across the country are still waiting for reliable high-speed internet, according to the Federal Communications Commission.

In the southeast, some states like Alabama are desperate to get their rural areas up to speed. Without reliable speedy connections, rural schools have gone without utilizing online tools for learning, hospitals don't have the latest technology and industries have been left behind.

Cole Sandlin, the owner of Fred’s Pharmacy in Hamilton, Ala., said everything from communicating with customers to processing claims was much more difficult without high-speed internet.

Cole Sandlin works to fill a prescription for a customer in Hamilton, Alabama where high speed internet is recently emergeing. (Fox News/Charles Watson)

“Processing claims was slower,” said Sandlin. “It’s really tough and it has been tough for our community.”

Sandlin said his previous provider offered him as much as 6 megabytes per second of broadband speeds. So he had to think twice about an e-medicine trial he wanted to try out at his pharmacy that would allow customers to communicate with doctors via video chat. That was until the area finally got approval for a company to come in and provide high-speed internet access.

IS UPGRADING TO 5G BECOMING A PROBLEM FOR WIRELESS COMPANIES?

“We would have never had the telemedicine kiosk without higher speed internet in our community,” he said. “A patient could come inside my pharmacy, see a lab doctor on a feed, get a diagnosis, pick their prescriptions up and not have to sit in a waiting room with people that might have the flu or be exposed to something like that. It's had a really positive impact on that.”

In 2018 Alabama Gov. Kay Ivey signed a rural internet bill into law that offered electric co-ops and telecommunications companies grant money in exchange for infrastructure investments in some of the state’s rural areas with little to no access to high-speed internet.

Electric co-op TomBigBee rolled out a five-phase, $48 million plan to install fiber optic cable in Hamilton, Ala. and part of its surrounding area through its ‘freedom Fiber’ broadband company.

The co-op has finished phase one of the project and has moved on to phase two since it was first approved in early 2017.

Georgia and Mississippi have also jumped on board. Both states passed legislation this year to give electric co-ops the authority to install, offer and expand broadband services to customers in rural areas of those states.

The roughly four dozen electric co-ops between the two states can now bid on more than $600 million in federal grants and loans offered through the United States Department of Agriculture’s ReConnect Program.

Texas and North Carolina are both considering legislation that would allow their electric co-ops to do the same.

"It’ll spur innovation," said Alex Hammerstone, practice lead for Governance Risk Management and Compliance at Trusted Sec. “The reality is, if there’s only one provider available, there’s no motivation to innovate.”