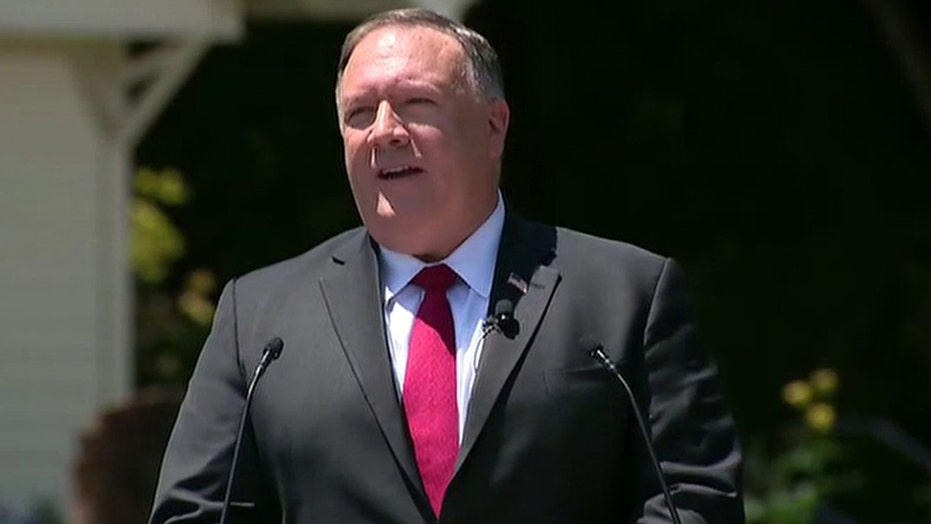 Every millimeter of Beijing is monitored by state-of-the-art surveillance cameras, according to the Beijing Public Safety Bureau. Facial recognition algorithms matched with images filed away in a secret database could see you in legal trouble for something you did near your front door. A semi-political post made in a private chat could lead to the loss of your job.

Yet it is only the tip of the iceberg -- and the very beginning -- of the rise of technologically-advanced China and its dystopian dreams. It might be a deterrent to crime, as the Chinese Communist Party (CCP) leadership advocates, but it also means a substantial loss of privacy and saps any semblance of free expression.

"The Chinese Communist Party is committed to the production and use of technology that controls and surveils its population," Chairman Robin Cleveland and Vice Chairman Carolyn Bartholomew of the U.S.-China Economic and Security Review Commission, told Fox News in a joint statement this week. "The decision to use these tools of repression is politically motivated to sustain the Party."

And what happens in China does not stay in China.

Surveillance -- or simply spying -- has become a booming business in the world's most populated country with scores of tech start-ups moving in to meet the market demand with the government's encouragement. But human rights activists say that the enterprise has quickly become a critical apparatus for suppression and abuses, especially on minority groups.

Notably, Beijing has endeavored for decades to crush the Uighur Muslim population in Xinjiang, and in recent years swept millions into concentration camps that the government prefers to call "re-education camps." But according to documents leaked earlier this year, the reliance on digital snooping innovations has been masterfully crafted.

The system in play is quietly called the Integrated Joint Operations Platform (IJOP), which has the ability to audit entire populations. From there, it can rapidly produce names of people classified as "suspicious" -- and thus marked for possible detention -- purely as a result of their travel patterns abroad, mobile applications installed and key phrases used in bulletins or private messages, sometimes as basic as asking someone else where they can pray.

Developed by a state-owned military contractor China Electronics Technology Corporation, IJOP is said to have been copied by Chinese military theorists researching how the U.S. military used information technology during the wars in Iraq and Afghanistan, and enhanced from there.

In this photo taken Thursday, Nov. 15, 2018, a computer screen shows the leaked online post from Guilin University of Electronic Technology warning of "hostile domestic and foreign powers" that were "wantonly spreading illicit and illegal videos" through the internet in Beijing, China. (AP Photo/Ng Han Guan)

If stopped at a checkpoint, IJOP can filter through billions of data points in a few seconds and learn everything about you -- from photos and home addresses to official identification numbers, education, Internet browsing history and family connections.

In addition to these pervasive police checkpoints, of which more than 10,000 police stations and tens of thousands of police have been hired since early 2017, surveillance measures include the urging of neighbors to snitch, placing CCP officials directly in homes and placing QR codes on the doors of homes so police can track who is supposed to be in each building.

According to Joseph Humire, Executive Director for the Center for a Secure Free Society (SFS), Xinjiang serves as the "central nervous system of surveillance" in China, which is an IJOP that prompts you to enter identifying information, such as when you grow a beard, leave your house, or your blood type, etc.

But it is not only minorities that are tracked.

"It is targeting the whole population with the focus on anyone who has independent thinking," said Xiaoxu "Sean" Lin, a microbiologist and activist/spokesperson for the Washington-based Falun Dafa Association. "Many technologies are involved in facial recognition including Facial Action Unit analysis, facial expression recognition, deep neuro network analysis, facial muscle movement recognition, topographic modeling, deep machine learning and supercomputer technologies."

Humire also pointed out that there is approximately one CCTV camera for every six citizens in China, "which makes China the most surveilled country in the world."

Recently, Beijing has brought its arsenal of tracking tools together to create a social credit score, which penalizes Chinese citizens for physical or digital activities that the Communist Party deems problematic.

"The government can use these social credit scores to impose restrictions on travel, banking, scholarship, and other pursuits, thereby forcing Chinese citizens to abide by the Communist Party's desires or accept serious personal and professional restrictions," explained Zack Cooper, a research fellow, and China policy expert at the American Enterprise Institute (AEI). "Many of these activities are conducted by Chinese companies at the request or direction of the government."

And that has something of a broad appeal well beyond its borders.

"Some authoritarian countries see China as a model for controlling a large population. Another advantage is that Chinese companies potentially have access to records on 1.3 billion individuals, which makes it much easier to develop and improve complex algorithms than is possible in smaller societies with more concern for data privacy," Cooper continued. "As a result, Chinese companies have made serious headway in recent years."

Experts also underscore that China, which has predominantly come to corner the market of artificial intelligence (AI) and facial recognition (FR) in recent years, is thus shaping the global standards and dictating the regulatory environment for surveillance technology, primarily so that its companies can access and dominate markets worldwide.

Heather Heldman, managing partner of geopolitical and risk forecasting firm, the Luminae Group, underscored that it is the combination of tools as a package that gives China's surveillance apparatus the upper hand.

"China is using a variety of tech tools to carry out its mass surveillance – everything from sophisticated DNA mapping to advanced social media monitoring and cyber-surveillance tools such as facial recognition – all tools more commonly used in a military or law enforcement context," she told Fox News. "Much of the funding for the construction and deployment of such systems comes from the Chinese government, but it also comes from international private sector enterprises that may be partially owned by a Chinese entity."

She also concurred that a number of other countries are also buying this technology, especially in Africa, "where it has been well received by autocrats seeking to maintain their grips on power."

Humire also conjectured that the controversial technology is being sold to countries in Latin America, most notably in Venezuela, where China's state-controlled ZTE Corp developed a new smart ID card.

"The Maduro regime is a strategic ally of Beijing, so in some sense, this was expected, however, this is also happening elsewhere in the region. In a northern province of Argentina, called Jujuy,  ZTE has sold a surveillance system with 600 cameras worth around $30 million," he said. "In neighboring Uruguay, they've donated more than 2,000 surveillance cameras to reportedly monitor the borders with Argentina and Brazil. In Brazil, Huawei equipment is embedded in government infrastructure and some agencies, like its Central Bank."

Overall, Chinese companies have exported surveillance technology to more than 60 countries worldwide, according to one report from the Carnegie Endowment, some of which have poor human rights records and therefore, would not be permitted to purchase from most developed nations.

Indeed, its universal footprint is continuing to expand.

"Countries and cities around the world have increasingly opted to employ public security and surveillance technology platforms from China," stated an April 2020 analysis by the Brookings Institute. "The drivers of this trend are complex, stemming from the expansion of China's geopolitical interests, the increasing market power of its technology companies, and conditions in recipient states that make Chinese technology an attractive choice despite concerns about security and privacy."

In some instances the countries buying -- and later funding the further development of oppression gadgets -- are tied up in pre-existing financial agreements with Beijing.

"The CCP and [Chinese President] Xi Jinping consider AI critical to its future military and economic power competition. The Belt and Road Initiative [BRI] has a digital silk road of Chinese-built fiber-optic networks that expose internet traffic to greater monitoring by Chinese intelligence agencies," Humire asserted. "There is a fear of economic retaliation from China because many countries in the world are indebted to the PRC. Half of the countries that China has exported its AI or surveillance tech is part of its BRI and depend on these infrastructure loans."

And with the turbulent proliferation of the novel coronavirus, which originated in the Chinese city of Wuhan late last year, many experts worry that the already mammoth surveillance engine will only be bolstered -- and at a record pace, with the CCP having enlisted the emergency aid of technology companies to develop products intended to squash the contagion's spread.

The U.S. is purporting to push back against the Chinese boom to backdoor surveillance. President Trump announced Friday that he intends to soon sign an executive order banning the China-developed, video-sharing app TikTok -- which has denied accusations of spying -- and messenger WeChat within the next six weeks. In addition, the government has long-cautioned other countries against allowing 5G company Huawei from operating within its borders.

Late last month, the U.S. added 11 Chinese companies to its economic blacklist, claiming the firms were involved in genetic analyses used to deepen the scale of abuses committed against Uighurs and other minorities.

"There have been some notable efforts recently to make the use of this surveillance equipment more difficult in Xinjiang," Copper added. "However, I think we have to be realistic that many of these companies have little exposure outside China, and few of their corporate leaders are going to change their behavior due to the threat or imposition of visa bans or banking restrictions."