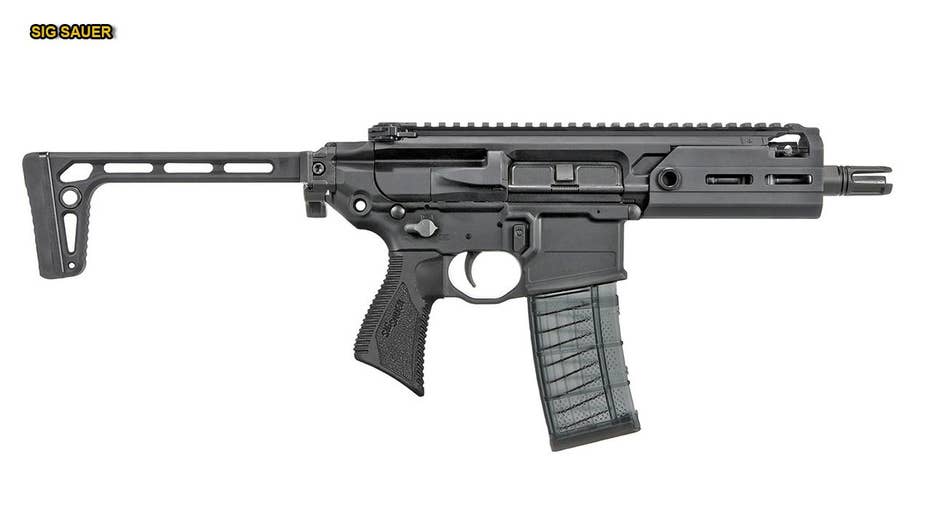 Soldiers may soon have a covertly-carried, powerful machine gun to defend Americans who are at high risk from enemy attacks.

Soldiers may soon have a covertly-carried, powerful machine gun to defend Americans who are at high risk from enemy attacks.

The new weapon would significantly boost the amount of firepower soldiers have at their fingertips to respond to a threat against individuals who are particularly attractive targets to terrorists, for example.

The threat to high-profile targets was highlighted recently when U.S. Army Brig. Gen. Jeffrey Smiley was wounded in a Taliban attack in Afghanistan’s Kandahar province.

While the weapon eyed by the military will deliver a more muscular response than those that tend to be carried on Protective Security Details, the goal is for the new beast to minimize collateral damage.

Dubbed the “Sub Compact Weapon,” this Army initiative aims to produce a smart, ultra-compact design for specific missions. This is essential because it means soldiers can be armed with a discreet and easy-to-conceal weapon. It also enables a soldier to be fast and agile to stop any threat.

In spite of being light and small for a machine gun, ideally, it will not compromise on overwhelming firepower and accuracy.

High-Risk Personnel - such as the Secretary of Defense or Chairman of Joint Chiefs for example – can be particularly attractive targets for enemy forces. HRPs can be symbolic objectives for an enemy force such as capturing or killing the highest ranked U.S. soldier.

When someone is designated High-Risk Personnel, the military provides Personal Security Details. One of their primary tasks is to safeguard HRPs and defend them against a range of potential threats.

PSD soldiers need to have the right weapons to defend and protect them whether it is a large, heavily armed force attempting a hostage taking, a few highly skilled enemies attempting assassination or any other sort of attack.

These types of scenario can require weapons that excel in close-quarters battle. Should the new weapon succeed, it will provide a significant upgrade for protecting Americans who are at high risk of attack from hostile forces.

Earlier this year, the Army put out a bat signal to the tactical sector looking for an entirely new weapon. The Army asked for smart innovation to solve a need for a 9mm subcompact weapon that was fully automatic.

In September, the Army chose six companies to devise a prototype of this new weapon.

When more than 30,000 soldiers of all ranks recently converged on the nation’s capital for the Association of the United States Army (AUSA) Annual Meeting and Exposition it wasn’t surprising that there was such big interest in seeing firsthand what the new machine guns will look like. AUSA is the largest land warfare event in North America.

The Sig Sauer Rattler was one featured weapon that drew crowds, buzzing with speculation that a Rattler variant would be the solution to stop threats to High-Risk Personnel. The Rattler has already caught the eye of US Special Operations who purchased some earlier this year.

What can soldiers expect?

There are several features on the new Army weapon wish list. The new design will be fully automatic with the option for the user to select semi-automatic as well.

Soldiers are familiar with Picatinny rails on their weapons and the Army would like one on this new weapon as well. Picatinny rails (aka MIL-STD 1913 rails) are used for accessories like scopes, for example.

In addition to the weapon itself, the Army expects potential new weapon makers to provide the accessories.

This could mean suppressors and magazines. It could potentially include other items like cleaning kits, spare parts and, if necessary, a specialized toolkit. For transport purposes, the Army may expect the company to provide new slings and carrying cases.

And of course, the Army may decide manuals could be handy.

The weapon must be compatible with 9x19 mm military grade ammunition.

Opting for 9mm rounds rather than 5.56mm could assist in reducing overpenetration and thus collateral damage.

If there is a situation where rapid fire against attacking enemy forces is required in a building populated by civilians, for example, then the 9mm rounds may not penetrate the walls. This reduces the likelihood that the civilian in a room next door being tragically hit by a bullet.

In addition to arming soldiers with a powerful weapon that is far less detectable, this new weapon could provide a number of other key advantages.

Pistols may not provide enough firepower to match the threat. Rifles can provide better lethality but are not always ideal for maximum concealment.

Army PSDs would be able to leverage these new sub compact automatic machine guns that are powerful while also extremely concealable – at least more so than current options.

But while the weapon delivers a more powerful response, it also will minimize the collateral damage. One of the ways it will do this is by delivering maximum accuracy at close range with 9mm bullets.

PODCAST:  STRIKE WITH THE FORCE OF A NAVY SEAL

The creation of a new sub-compact weapon tailored to the Army’s planned purposes has not been exactly smooth sailing. The goal has existed for quite a few years. However, it only appeared to gain serious momentum earlier this year, seemed to falter with some offers rescinded, and then gained renewed drive forward with the recent offers issued to the final six.

Surprise abounded when powerhouse gunmakers like Beretta, Colt, CZ-USA and Heckler & Koch were not given the opportunity to participate in the relaunch of the prototype search. This intensified curiosity about the final six designs and the foot traffic of soldiers at AUSA interested in learning about the project’s progress.

If the Army chooses one of the prototypes, then it could lead to an initial purchase of 350 of the new weapons and then up to about 1,000.