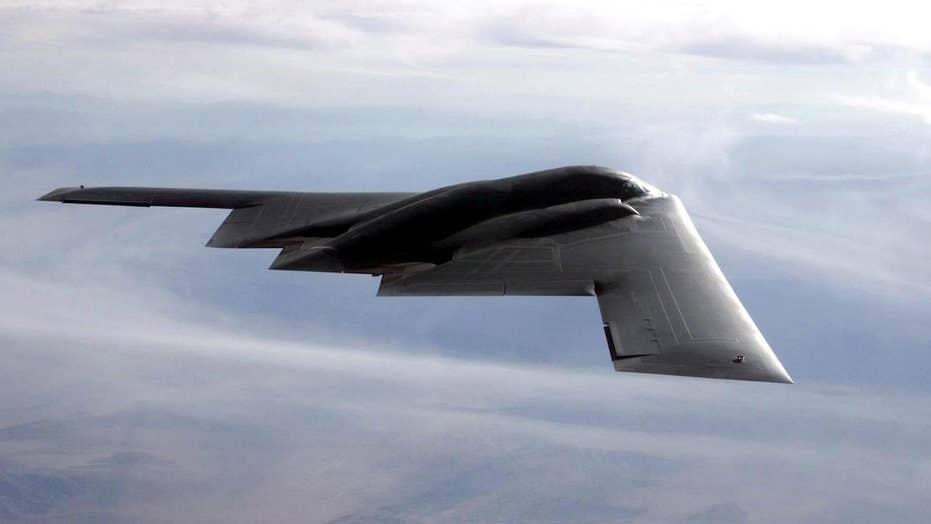 Defense Specialist Allison Barrie shares an inside look at a the new nuclear arsenal being developed by the military that will provide US stealth aircraft with greater precision and versatility.

It is not every day that a new nuclear bomb design is announced.

This week, the National Nuclear Security Administration said it had completed its final review of a powerful weapon based on the B61s and outlined the next steps to revamp several types of nukes. The United States military will soon be able to slip undetected through enemy surveillance in stealth bombers and fighter jets to launch a devastating strike anywhere on the planet if need be.

Dubbed the B61-12 gravity bomb, the new nuclear weapon is expected to start production in 2020.

The U.S. nuclear weapons arsenal has been aging. The search for solutions has been long and exhaustive, and our military experts decided to focus on the B61s, with the aim to “extend their life” for another 30 years.

The aircraft can be refueled while in the air so they can keep running missions. (U.S. Air Force)

The B61-12 will arm aircraft like the iconic B-2 Bomber. The B-2 has such remarkable stealth that it can penetrate deep into enemy territory without detection, and attack heavily fortified and defended targets.

When the advanced stealth of American aircraft like the B-2 and F-35 fighter jet is combined with these new modernized nukes, it is an undeniably powerful combination. It certainly sends a message to enemy forces that nowhere is safe from the reach of U.S. military might.

So what is this new nuke?

The B61-12 will be the solution to provide a 30-year life extension for some of the aging nuclear weapons. One of the primary goals had been to consolidate four existing versions of nuclear bombs into one upgraded one. The bombs in the lineup for the “life-extension” process are the B61-3, -4, -7 and -10.

By harnessing the latest advances in precision guidance tech and incorporating it into the bomb makeover, the military should gain a weapon with enhanced precision. It will be low yield and, in terms of war planning, more versatile against a range of threats.

The B-2 flies over the Utah Testing and Training Range at Hill Air Force Base, Utah, during the test run Sept. 10, in which the B-2 dropped 80 inert Joint Direct Attack Munitions. (U.S. Air Force photo by Bobbie Garcia)

In terms of other military war planning gains, the upgrade would also most likely enhance how effective the weapon would be. For example, say the enemy military and political commands were conducting attacks against U.S. home soil thinking they were safe and snug beyond U.S. reach in underground bunkers.

In part due to the modern guidance systems, some experts believe these modernized nukes will make those bunkers just as vulnerable to – and within reach of – U.S. strikes as if the hostile country’s leadership was orchestrating attacks against Americans from a straw hut above ground.

PODCAST: WHAT DOES IT TAKE TO BUILD THE ULTIMATE WARRIOR? FIND OUT FROM THIS BATTLE-PROVEN NAVY SEAL

The modifications are expected to provide a number of additional advantages. For starters, the aim is for the new bomb to cause less radioactive fallout, which is unquestionably a good idea.

Another vital change would be collateral damage.

If the unthinkable were to happen and a nuclear bomb was dispatched, then the new enhanced accuracy should also aid in reducing collateral damage as compared to current variants.

Some countries have very advanced defenses. Every second of the day, they have sophisticated tech scanning for any possible intrusion across borders. These countries often have very advanced air defenses and quick reaction forces in place ready to jump in fighters and respond by fighters as well. Once a threat is detected, the nation’s defenses will track a threat and aim to shoot it down.

Too bad for those guys. American stealth is mind-blowing. For decades, the B-2 has been able to penetrate foreign airspace unseen and reach the most heavily defended targets — if called upon to do so. They have been ready to deliver invisible, decisive blows with powerful weapons deep within a hostile country should the need arise.

The B-2 Spirit is a multi-role bomber capable of delivering both conventional and nuclear munitions. (U.S. Air Force photo by Gary Ell)

The B-2s can be armed with conventional weapons, but also nuclear weapons.

Flown with a crew of two pilots, there is a pilot in the left seat and mission commander in the right. The B-1Bs and B-52s fly with larger crews.

It can fly very high and very far. The ceiling is 50,000 feet and the missions can be intercontinental, traveling about 6,000 nautical miles without refueling — that means rapid intercontinental strikes across oceans are no problem. The B-2 travels at deliberately unspecified speeds, but it is disclosed publicly as high subsonic.

And the bomber also can carry a heavy payload of up to approximately 40,000 pounds, which translates into an immense amount of weaponry.

But how is it so stealthy?

The short answer is the stealth formulas on U.S. aircraft are classified and for very good reason.

But the basic recipe on the B-2 involves ultra-advanced tech to reduce the “tells” that an adversary looks for when scanning for threats. These tells can expose the existence of an aircraft in their airspace. They use these clues to identify its location, then track, target and attack.

This new nuke is expected to be certified not just for the B-2 bomber, but also the behemoth B-52 bombers. (U.S. Air Force)

Another key component is the design. The B-2 has an unforgettable design that would not be out of place in Star Wars. The shape also plays a role in reducing an enemy’s ability to spot it with their tech.

Will any other aircraft be armed with the new nuke weapon?

This new nuke is expected to be certified not just for the B-2 bomber, but also the behemoth B-52 bombers. The 5th generation, futuristic F-35 fighter jet with its own astonishing stealth may also carry the new bombs.

Other key fighter jets – like the F-15, F-16 and F/A-18 fighter aircraft – will also be certified to be armed with the new nukes. Key allies, Great Britain and Germany, are also expected to have their Tornados certified for the bombs, as per a NATO agreement.

It is vital that the aging parts in the nuclear weapons arsenal be addressed and resolved.

The “live extension program” aims to update them to buy at least three more decades before the ever-aging weapons need to be freshened up again. A 2016 NNSA report estimated this phase of “life-extension” could cost about $9.5 billion.

The basic recipe on the B-2 involves ultra-advanced tech to reduce the “tells” that an adversary looks for when scanning for threats. (U.S. Air Force)

The nuclear arsenal will continue to require periodic “life-extensions,” but also regular maintenance.

This arsenal of aging nukes is in the United States but some nuclear bombs – “non-strategic” nuclear bombs – have been positioned in European countries. Those bombs could also potentially be upgraded and return to position within NATO allies’ borders in Europe.

In this seeming Winter is Coming era of Cold War tensions resurging, it remains to be seen how the “life-extension” will be perceived by Russia and other countries. Proponents argue it will be a deterrent, others are concerned it will be interpreted as escalation and fuel nuclear weapon proliferation in countries not so friendly to the United States.

A B-2 Spirit prepares to receive fuel from a KC-135 during a mission in the European Theater supporting NATO Operation Allied Force. (U.S. Air Force photo by SSgt Ken Bergmann)