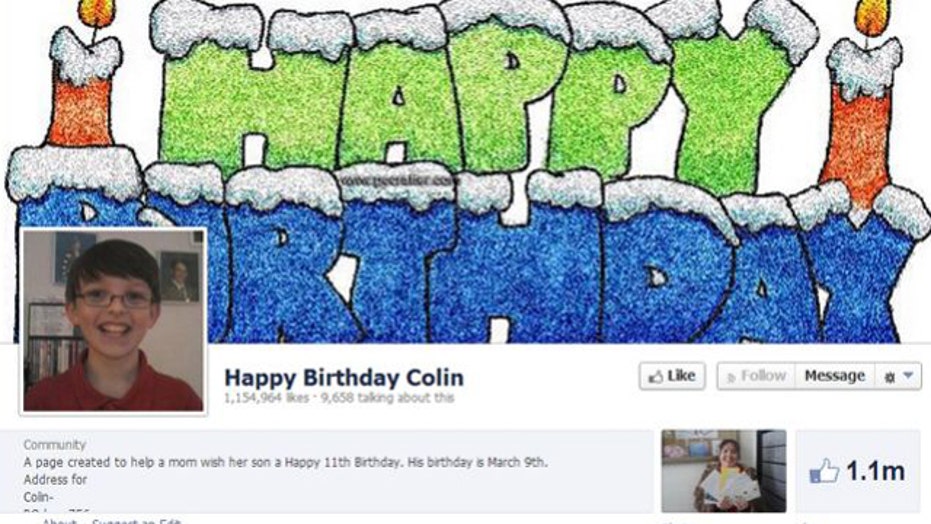 Over a million Facebook 'likes' for boy who had 'no friends'

When a 10-year-old boy told his mother he didn't want to have a birthday party because he had no friends to invite, she created a Facebook page to show him how many people really did "like" him.

"We were talking about his birthday coming up and I had mentioned it a few times and he said he didn't want a party," Jennifer of Kalamazoo, Michigan told WoodTV. "And I said, 'Why don't you want a party?' [He answered] 'Mom, who am I going to invite? I don't have any friends.'"

Bothered by her son's words -- he was diagnosed with a sensory processing disorder and another disorder similar to autism and Asperger syndrome last year -- Jennifer turned to Facebook to surprise her son.

She created a page called "Happy Birthday Colin" where she asked friends and family members to wish her son a happy birthday by liking the page.

"When you put a bunch of 10-year-olds and one who acts like that, and they are all going, 'What’s wrong with that kid?' You know, it's hard," she said.

Jennifer planned on surprising her son with a couple dozen likes for his birthday on March 9, but instead was shocked when the page started gaining hundreds of thousands of likes from complete strangers.

"Some of my friends and their friends will like the page, post some nice comments for his birthday," she said. "It will be a great surprise." But within a week, the page had received 8,600 likes from people all over the world.

Colin still does not know about the Facebook page, and mom Jennifer hopes to surprise him with it on his birthday.

"Happy Birthday Colin" has nearly 1.2 million likes as of Wednesday morning, and thousands of people turn to the page every day. Jennifer even set up a P.O. box for people to mail Colin birthday cards.