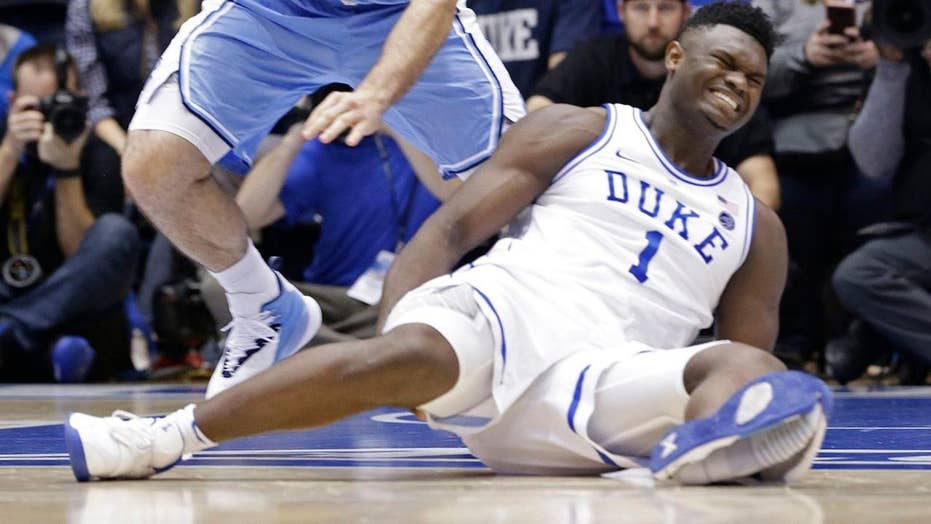 A freak injury to Duke’s star player Zion Williamson during Wednesday night’s game could be a product-liability risk for Nike, Inc., according to a report.

The accident came in the first 36 seconds of the game against the North Carolina Tar Heels. Williamson, 18, was dribbling when his Nike shoe appeared to burst open, causing his knee to twist and his right foot to push through the sneaker. He was forced to sit out the remainder of the game.

"This would be a classic product-liability case if Mr. Williamson suffered any serious injury and was inclined to bring one," Paul Edelstein, a lawyer at Edelstein Faegenburg & Brown, told Bloomberg. Edelstein said Williamson has a good case if there's proof of misuse after the shoe left the factory -- a scenario he likened to "a laborer climbing a ladder that suddenly collapsed under his weight."

"The quality and performance of our products are of utmost importance. While this is an isolated occurrence, we are working to identify this issue," the statement read.

Representatives from Nike met with Duke officials on Thursday to assess the role its product had played in Williamson's injury, The News & Observer reported.

Duke head coach Mike Krzyzewski on Thursday said that Williamson’s injury was a “mild knee sprain,” and is “stable.” But whether Williamson continues the season, is ultimately up to him, ESPN reported.

The incident has also brought renewed attention to NCCA’s policies of not paying its college athletes while retaining multimillion deals with companies like Nike.

“Again let’s remember all the money that went into this game…and these players get none of it…and now Zion gets hurt…something has to change @NCAA,” tweeted Utah Jazz player Donovan Mitchell.

Golden State Warriors center DeMarcus Cousins weighed in, calling college basketball “bull---” and urged Williamson to “do what’s best for you and your family” and get “ready for the next level.”

Willamson, widely considered one of the NCAA's best players, is expected to be available for next month's NCAA tournament, pending his decision to remain with the team.