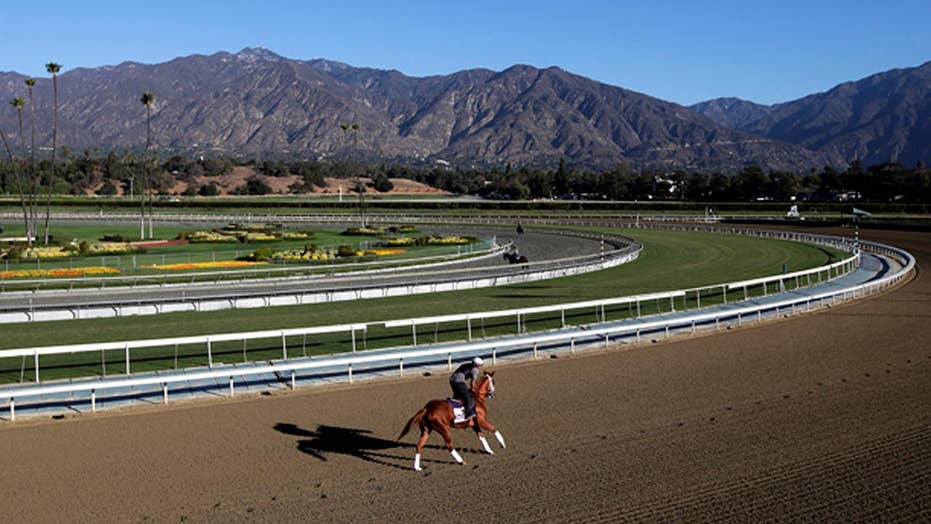 California's Santa Anita racetrack will remain open despite calls from the state's racing board to suspend competition for two weeks.

Two horses died over the weekend at a southern California racetrack where 27 horses have died in training incidents since December, prompting a state racing board to call for the rest of the season to be suspended as the track's management has chosen to press on.

Truffalino, 3-year-old filly, collapsed in the final stages of the third race on turf Sunday. A track spokesman says the horse died of a heart attack.

The horse had pulled up inside the eighth pole and collapsed after the jockey dismounted, FOX11 reported. The reported temperature in the area at the time of the race was around 97 degrees.

A day earlier, Formal Dude, a 4-year-old gelding, had to be euthanized after sustaining an injury during that day's 10th race and breaking down nearing the finish line.

In the wake of the two deaths, the California Horse Racing Board recommended the track suspend the remaining days of its meet, which is set to end June 23. The racing board added that horses should be allowed to continue training, believing it would provide the industry extra time to fully implement announced safety initiatives.

In this March 5, 2019, file photo, a statue of Zenyatta stands in the paddock gardens area at Santa Anita Park in Arcadia, Calif. (AP Photo/Jae C. Hong)

The racing board doesn't have the authority to suspend a race meet or remove race dates from a current meet without the approval of the track operator or without holding a public meeting that requires 10 days' notice.

"It is our understanding that Santa Anita management, after consultation with certain other industry stakeholders, believes that for a variety of reasons, the future of California racing is best served by continuing to race," the racing board said in a statement.

In providing Santa Anita 10 days' notice, the CHRB may be able to shut down the track for the last three days of the meet.

Santa Anita has enacted a series of reforms aimed at improving safety, but despite its efforts and a six-week stretch in which no horses died at the Arcadia track, more deaths have occurred. The Stronach Group, which owns Santa Anita, told the Los Angeles Times that reforms have "have been effective" in reducing the number of catastrophic injuries at the track.

Vasilika and jockey Flavien Prat, left, compete in the Grade I, Gamely Stakes at Santa Anita Park in Arcadia, Calif., Monday, May 27, 2019. (Benoit Photo via AP)

"After extensive consultation among all partners, Santa Anita Park will stay open through the end of the meet to see these reforms through," the group told the Los Angeles Times.

The number of deaths at the track has prompted calls from animal-advocacy groups and some politicians for a halt in racing at Santa Anita.

"Either the rules aren't strong enough or the rules aren't being followed, but whatever the reason for the deaths of two more horses, Santa Anita needs to listen to the California Horse Racing Board and shut down," Kathy Guillermo, senior vice president of People for the Ethical Treatment of Animals (PETA), told the Associated Press.