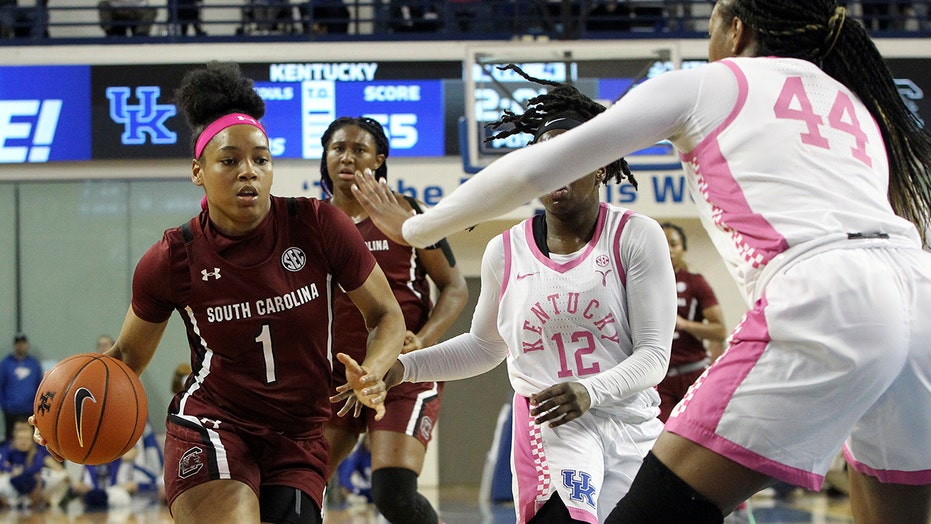 South Carolina’s latest Southeastern Conference title took precedent over personal achievement, though coach Dawn Staley was grateful to those that made her milestone possible.

No doubt, she was especially thankful this young Gamecocks group matured so quickly into a league champion.

“I didn't even put goals with this team because I didn't even know them," Staley said of a roster featuring just three upperclassmen. ”How would they respond to playing in this league and play on a schedule that we have? You just don't know.

"We have a foundation. It's just allowing them (to see) the blueprint of what it looks like.”

At first, South Carolina allowed Kentucky to reveal itself before steadily imposing its will on both ends.

The Gamecocks (27-1, 14-0) trailed early before outscoring the Wildcats 17-1 over the final 5:14 of the first quarter. Kentucky mounted several small rallies and got within 49-40 midway through the third, but South Carolina closed with a 10-3 spurt that included consecutive transition baskets by Cooke.

“I was just trying to go out there and make sure I was moving and flow, get my teammates the ball,” the freshman guard said after making 8 of 11 from the field. “And if I felt like I had the opportunity to score, I would as well.”

Kentucky (20-6, 9-5) outscored the Gamecocks 15-8 in the fourth but didn't get within single digits until Rhyne Howard's 3-pointer with 3 seconds remaining.

Mikiah Herbert Harrigan, Tyasha Harris and LeLe Grissett each scored 10 points for South Carolina. Freshman Aliyah Boston had 11 rebounds, six points and three blocks as the Gamecocks dominated the inside 38-14 and won the rebounding battle 38-31 to give 12th-year coach Staley her 300th victory with the school.

South Carolina also earned its 11th win in 12 meetings against the Wildcats with the season sweep.

Howard had 24 points and 11 rebounds for Kentucky, which shot 36% or worse in each quarter and just 18% in the fourth. The Wildcats had sought to beat their second top-10 team in as many weeks after beating then-No. 6 Mississippi last Sunday.

“They make it so hard on you to score,” Wildcats coach Matthew Mitchell said. “We had some chances at some critical points where we couldn't make a bucket.”

Kentucky wore home whites with pink trim and numbers in its annual Play4Kay game to honor Kay Yow and raise awareness and support for cancer research. The Gamecocks wore pink socks while played such as Brea Beal wore one pink shoe and one fluorescent green shoe.

South Carolina: As usual, the Gamecocks controlled the paint with the wealth shared between the frontcourt and backcourt. They missed all five shots from beyond the arc, but it didn't matter as they controlled other areas.

“That was part of our game plan, just pounding the paint,” said senior guard Tyasha Harris, who had eight points and six assists. “We recognized it from the first game that we contribute to that, we had a lot of points off of the paint and wanted to stick with the same game plan.”

Kentucky: One game after ringing up a season-high 94 points at Mississippi, the Wildcats found chances and points hard to come by against a Gamecocks defense that entered the game ranked 18th nationally. They made just 10 of 39 (26%) from inside the arc, and things were even tougher on the other end as South Carolina continually drove the lane for baskets.

South Carolina concludes its road schedule on Thursday at Florida before finishing the regular season against Texas A&M on Sunday.

Kentucky hosts Georgia on Thursday in its regular season home finale before visiting Vanderbilt on Sunday.