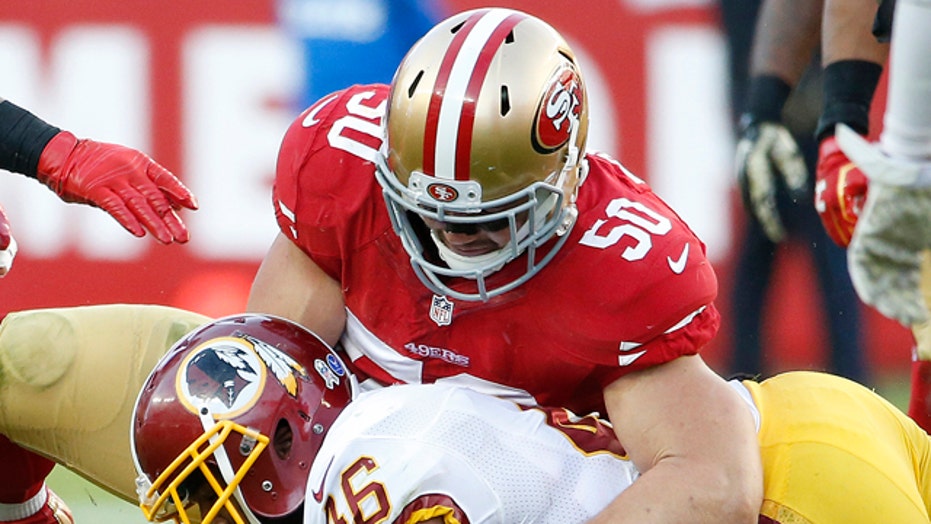 Borland says continuing in the NFL is not 'worth the risk'

The NFL world was stunned Tuesday after news broke that a budding star linebacker retired after just one season and forfeited nearly $500,000 out of concern over concussions.

The San Francisco 49ers' Chris Borland, a third-round draft pick from Wisconsin who led the team in tackles in 2014 and was expected to play a key role in the upcoming season, unexpectedly announced he would walk away from the game. Borland, 24, said he spoke to family members, former players and researchers who have studied concussions and concluded a career in the violent sport just wasn't worth it.

"I just honestly want to do what's best for my health," Borland told ESPN. "From what I've researched and what I've experienced, I don't think it's worth the risk."

"From what I've researched and what I've experienced, I don't think it's worth the risk."

"For me, it's wanting to be proactive," Borland added. "I'm concerned that if you wait till you have symptoms, it's too late."

Borland said he believes he suffered a concussion during the 2014 pre-season, and played through it. BUt he found himself wondering, "What am I doing?" While he said he believes he has recovered and is "as sharp as I've ever been," he knew he risked more concussions if he continued playing. His decision comes amid a focus on brain injuries and long-term effects in the NFL. Concussions have been linked to neurological diseases such as chronic traumatic encephalopathy, or CTE. CTE has been found in the postmortem brains of a number of former NFL players, including Pro Football Hall of Fame enshrinee Junior Seau and Super Bowl winners Dave Duerson and Mike Webster.

Borland said he has had two diagnosed concussions: one while playing soccer in the eighth grade, the other while playing football as a sophomore in high school.

Borland, who grew up in Kettering, Ohio, graduated from University of Wisconsin with a degree in history, and was the school's 2014 Student-Athlete of the Year. He was lauded that year for doing 125 hours of volunteer community service through the Badgers' "Give Back" program. Borland told ESPN he plans to return to school and may pursue a career in sports management.

“Shocked to hear the news about my dude Borland, but I totally understand his decision to retire," wrote San Francisco teammate and fellow linebacker Chase Thomas. "Much respect.”

“Pleasure playing with you, Chris Borland, and against you for the 49ers," Wilson Tweeted. "Praying for you.”

The 49ers, who had recently waived aging linebacker Patrick Willis and were counting on Borland to play a pivotal role in their defense, were caught off-guard by the decision.

"While unexpected, we certainly respect Chris' decision," 49ers general manager Trent Baalke said in a statement. "From speaking with Chris, it was evident that he had put a great deal of thought into this decision. He was a consummate professional from day one and a very well-respected member of our team and community ... We will always consider him a 49er and wish him all the best."

Borland had a team-leading 108 tackles in his stellar 2014 rookie season, emerging as a punishing defender. He also had a sack and two interceptions.