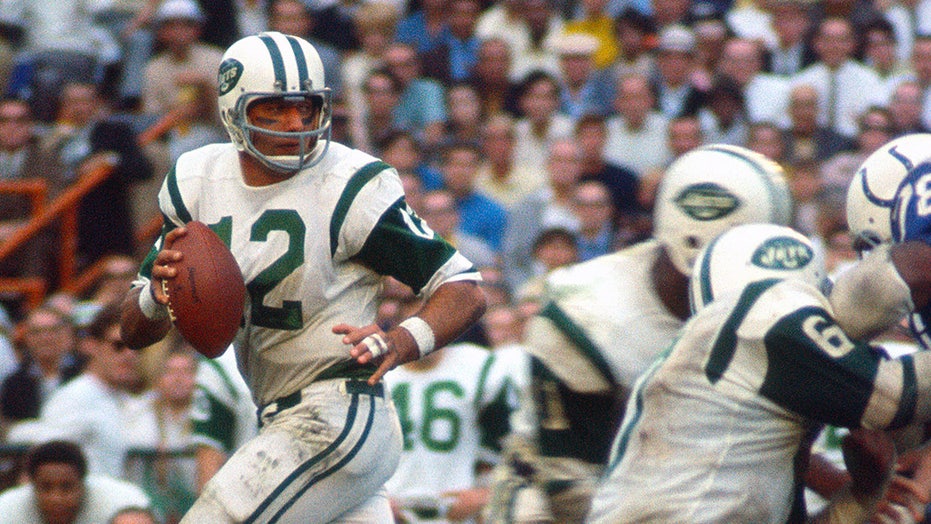 The New York Jets were originally founded in 1959 as a member of the American Football League.

Initially called the Titans of New York, the franchise changed its name in 1963 and relocated to Shea Stadium after its completion in 1964. The Jets saw brief success under famed quarterback Joe Namath in the late 1960s but it was short-lived.

After winning the AFL Championship in 1968 and Super Bowl III and the AFL East the following year, the Jets would not make another playoff appearance until the 1980s where they would go on to make the playoffs four more times.

The team began to struggle again throughout the mid-1990s until 1998 when they won the AFC East. The Jets would see another spurt of success in the 2000s where they made five playoff appearances.

But who would make a Mount Rushmore of Jets players? Take a look at the list below.

MIAMI, FL - JANUARY 12: Joe Namath #12 of the New York Jets drops back to pass against the Baltimore Colts during Super Bowl III at the Orange Bowl on January 12, 1969 in Miami, Florida. The Jets defeated the Colts 16-7. (Photo by Focus on Sport/Getty Images)

Joe Namath is the most iconic name in Jets history and is responsible for one of the greatest upsets in football, leading the franchise to its only Super Bowl win over the favorited Baltimore Colts in 1969.

Despite a slow start in his rookie season, “Broadway Joe” would go on to be a success in the AFL and eventually the NFL, becoming the first professional quarterback to pass for over 4,000 yards in a single season in 1967. He was named AFL MVP back-to-back years and was selected for the AFL All-Star team four times.

After the merger in 1970, Namath led the NFL in passing yards and touchdowns and was named to the Pro Bowl in 1972.

He was inducted into the Pro Football Hall of Fame in 1985.

A close second, Don Maynard is another name that resonates strongly with Jets fans.

After playing one season with the New York Giants, Maynard would return to New York as the first player to sign with the then-Titans in 1960. He spent the majority of his career with the franchise and was a part of the dynamic team that saw the Jets only Super Bowl win.

EAST RUTHERFORD, NJ - OCTOBER 09: Curtis Martin #28 of the New York Jets runs with the ball during a game against the Tampa Bay Buccaneers on October 09, 2005 at the Meadowlands Stadium in East Rutherford, New Jersey. (Photo by Sporting News via Getty Images)

A costly addition at the time, Curtis Martin would be one of the best free agents of all-time to join the franchise.

Initially drafted by the New England Patriots in 1995, Martin signed with the Jets as a restricted free agent in 1998. A five-time Pro Bowler and two-time First-team All-Pro, Martin was a part of the Jets’ resurgence into the playoffs.

He is the franchise leader in rushing yards, attempts, and rushing touchdowns. He was inducted into the Hall of Fame in 2012.

LONDON, ENGLAND - OCTOBER 04: Darrelle Revis #24 of the New York Jets celebrates his interception with Antonio Cromartie #31 of the New York Jets during the game against Miami Dolphins at Wembley Stadium on October 4, 2015 in London, England. (Photo by Stephen Pond/Getty Images)

One of the best cornerbacks in the NFL at the time, Darrelle Revis completes the list of Top 4 all-time Jets players.

Revis spent 8 seasons with the Jets but his first six were where he saw his most success. A four-time Pro Bowler and three-time First-team All-Pro while with New York, Revis helped lead the Jets to consecutive AFC Championship games.