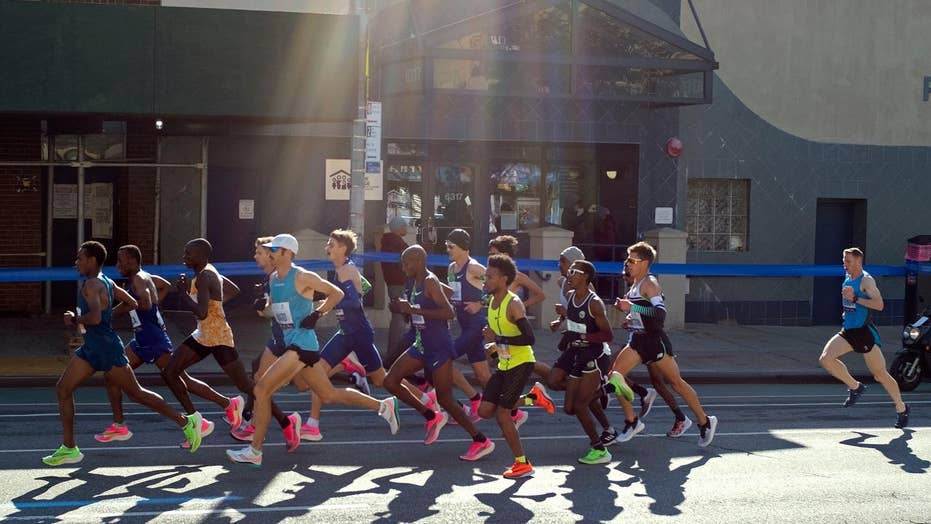 An estimated 52,000 runners participate in the 2019 NYC marathon; Jacqui Heinrich reports from Manhattan.

The 49th running of the New York City Marathon on Sunday was marked by a major upset on the women's side and the second win in three years on the men's.

Joyciline Jepkosgei, 25, of Kenya came out on top Sunday, winning the 2019 TCS New York City Marathon in her debut running in the race with an unofficial finish time of 2 hours, 22 minutes, and 38 seconds, seven seconds off the course record.

Jepkosgei overtook the reigning champion and countrymate Mary Keitany, who was attempting her fifth title in six years at the New York City Marathon, in the last half of the race. The Kenyan pulled away from Keitany with about 3 miles to go. Four-time winner Keitany collapsed after finishing 53 seconds later.

A year ago, 37-year-old Keitany finished 17 seconds off the course record. Keitany had dominated the New York City Marathon since her first victory in 2014. She followed with two more consecutive titles, including a dominant conquest in 2016 when she won by more than 3 1/2 minutes and finished last year with her fastest mark yet, in 2 hours, 22 minutes, 48 seconds — not far off Maraget Okayo's 2:22:31 course record from 2003.

But it was Jepkosgei who pulled away on Sunday to become the youngest winner in New York since 25-year-old  Okayo in 2001, with the second-fastest time ever by a woman in the open division.

She also won the New York City Half-Marathon in March and is the first runner to win both events.

On the men's side, reigning champion Lelisa Desisa dropped out of the New York City Marathon after completing just 7 miles, perhaps hurting following a grueling victory at the sweltering world championships last month. That allowed Geoffrey Kamworor of Kenya to win the men's division of the 2019 TCS New York City Marathon, his second time winning the race, with an unofficial finish time of 2 hours, 8 minutes and 13 seconds.

He was greeted at the finish line by training partner Eliud Kipchoge, who completed the first sub-2 hour marathon last month — a feat accomplished under conditions so tightly controlled it didn't qualify for the record books.

Kamworor, also the world record holder in the half-marathon, is the 10th multi-time winner.

Competitors in the elite women's runners division make their way across the Verrazano-Narrows Bridge during the start of the New York City Marathon, Sunday, Nov. 3, 2019, in New York. (AP Photo/Julius Motal)

American Desiree Linden set the pace for the women early and was the top U.S. finisher at sixth. The 2018 Boston Marathon winner told the Associated Press she hasn't decided whether she will push on to the Olympic team trials in Atlanta on Feb. 29.

The 36-year-old wants to gauge her recovery before deciding whether to pursue a third Olympics.

"Right now's not the time, just based on how my calves and my feet feel," Linden said.

Runners make their way across the Verrazano-Narrows Bridge during the start of the New York City Marathon, Sunday, Nov. 3, 2019, in New York. (AP Photo/Julius Motal)

It was 45 degrees at the start of the men's race, ideal for marathoning.

Roughly 52,000 took to the streets of New York City on Sunday on the trek to the finish line in Central Park after winding through New York's five boroughs. Last year, a world record 52,813 crossed the finish.

Manuela Schär of Switzerland won her third straight women's wheelchair title, giving her eight consecutive marathon major victories. After rolling ahead of the record pace for much of the race, Schär crossed the finish about a minute off the mark at 1:44:20.

Daniel Romanchuk of the United States repeated as men's wheelchair champion in another tight finish over Switzerland's Marcel Hug. Romanchuk held off Hug by one second for the second straight year, crossing the finish line 1:37:24 England's David Weir and American Aaron Pike were also within 10 seconds.

Last year, Romanchuk became the first American and youngest competitor to win the men's division as a 20-year-old. He followed with victories this year at the Boston and London marathons. Hug took the New York title in 2016 and 2017.

Among those on the streets of the Big Apple included former New York Giants running back Tiki Barber, who was running his sixth straight NYC Marathon.

"Orange Is the New Black" actor Uzo Aduba was running the race for the second time, while Luke Kirby from "The Marvelous Mrs. Maisel" was making his debut in the race.