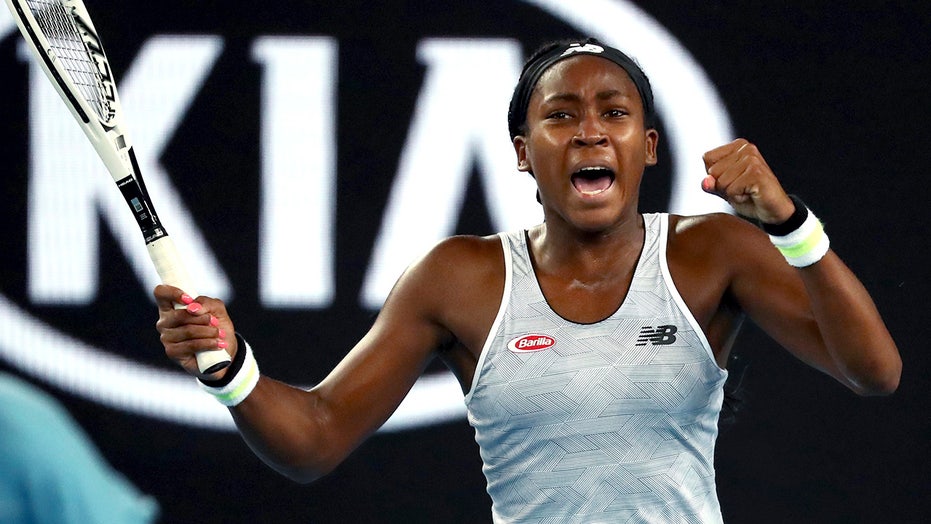 Everyone had the same question when the Australian Open draw was revealed: What were the odds that Coco Gauff and Venus Williams would face each other again in the first round at a Grand Slam tournament?

Gauff, 15, played Williams, 39, to begin her first appearance in the main draw at Melbourne Park, just like they matched up to start things off at Wimbledon about six months ago. And, just like at the All England Club, the youngest woman in the field got the better of the oldest woman in the field, with Gauff beating Williams 7-6 (5), 6-3 on Monday.

“I definitely was more confident this time. I think I was used to playing on big courts, so the crowd — I guess the size of the crowd didn't startle me as much as last time,” Gauff said. “Definitely a bit more positive coming into this match.”

It was the most anticipated contest of Day 1 at the first major tennis tournament of the decade, and it did not disappoint. The first set, in particular, was intriguing, with Gauff repeatedly pulling ahead, only to have Williams — who already had won four of her seven Grand Slam singles trophies by the time her foe was born — rebuff her.

It wasn't until her fourth set point that Gauff finally pulled it out. She quickly grabbed a 3-0 lead in the second and never let that edge go.

Gauff already has demonstrated all sorts of terrific qualities on a tennis court, from her big, gutsy serves to an ability to track down opponents' shots. Now you can add stick-to-it-iveness to the list.

The match was held in Margaret Court Arena, one of three stadiums with a retractable roof, and that was a good thing. The air quality was fine, but a heavy storm that arrived in the afternoon suspended nine matches on outside courts in progress and postponed more than 20 others entirely, creating a jam-packed schedule for Tuesday. The start will be a half-hour earlier than usual, and three courts have seven-match programs.

Among the players who got a chance to play — and win — were Novak Djokovic, Roger Federer, 2019 semifinalist Stefanos Tsitsipas, defending women's champion Naomi Osaka, 23-time major champion Serena Williams, No. 1 Ash Barty and 2018 Australian Open winner Caroline Wozniacki, who is retiring after this tournament.

Barty got off to a rough start, dropping her opening set, before asserting herself and coming back for a 5-7, 6-1, 6-1 victory over Lesia Tsurenko.

Serena, who is 38, did what her older sister couldn't: defeat a teen.

Other than a brief second-set blip, Serena had very little trouble getting past 18-year-old Anastasia Potapova of Russia 6-0, 6-3 to begin her latest bid for a 24th Grand Slam singles championship.

Serena took the last three games of the match, then declared with a laugh: “I started out well today. Ended well.”

Her most recent major trophy came in Australia in 2017; that also had been her last title of any sort until this month, when she won a hard-court tuneup in Auckland, New Zealand.

Gauff beamed Monday while discussing a dance routine she did with Serena that went viral on social media.

There were laughs about her love of TikTok and her self-deprecating discussion of a propensity for procrastination when it comes to schoolwork.

One with lofty goals, though.

“I mean, my mission is to be the greatest. That's my goal, to win as many Grand Slams as possible. But for today, my mission was to win,” said Gauff, whose good friend and doubles partner, 18-year-old American qualifier Caty McNally, upset 2011 U.S. Open champion Sam Stosur of Australia 6-1, 6-4 at night.

Another past champion at Flushing Meadows, Sloane Stephens, bowed out, too, beaten by Zhang Shuai 2-6, 7-5, 6-2.

One key was that Williams ended up with 41 of those miscues, 11 more than Gauff.

Another was that Williams, long one of the most feared servers on tour, was outdone in that category by her opponent on this day. Not only did Gauff face only two break points, saving one, but she often came up with the goods at the most crucial moments, pounding an ace at 115 mph, say, or hitting a risky second serve at a high velocity to the perfect spot to draw a no-good return.

All the while, Gauff was not shy about celebrating the biggest of points with a loud "Come on!" and a series of fist pumps.

Otherwise, she had her game face on, betraying little emotion, including when she walked out onto the court with earbuds in place after getting a pre-match peck on the cheek from her father, Corey, who also serves as Gauff's coach.

Gauff is ranked 67th, and Williams, a former No. 1, is 55th. Williams was playing in a Grand Slam tournament's main draw for the 85th time, a record for the professional era, but this also was her first match of 2020, because of a hip injury that sidelined her at the start of January.

This is Gauff's third major, but she sure is precocious.

"She clearly wants it and works very hard and is extremely mature for her age," Williams said. “The sky's the limit for her.”

Ranked 313th, Gauff became the youngest qualifier in Wimbledon history, then made it all the way to the fourth round, generating a ton of buzz, before losing to eventual champion Simona Halep. She backed that up with a run to the third round at the U.S. Open, then won her first WTA singles title later in the year.

The forehand that might have been the biggest question mark with her game after her breakthrough, seemed improved, yes, but still was a weakness Williams could test.

Another question entering this season had to be how Gauff would handle being someone everyone gears up for, someone everyone knows about, and someone who might need to deal with the pressure to perform and live up to the ever-growing and enormous expectations.

“I guess I came to the realization that I need to play my game, not worry about what people think of me,” Gauff said.