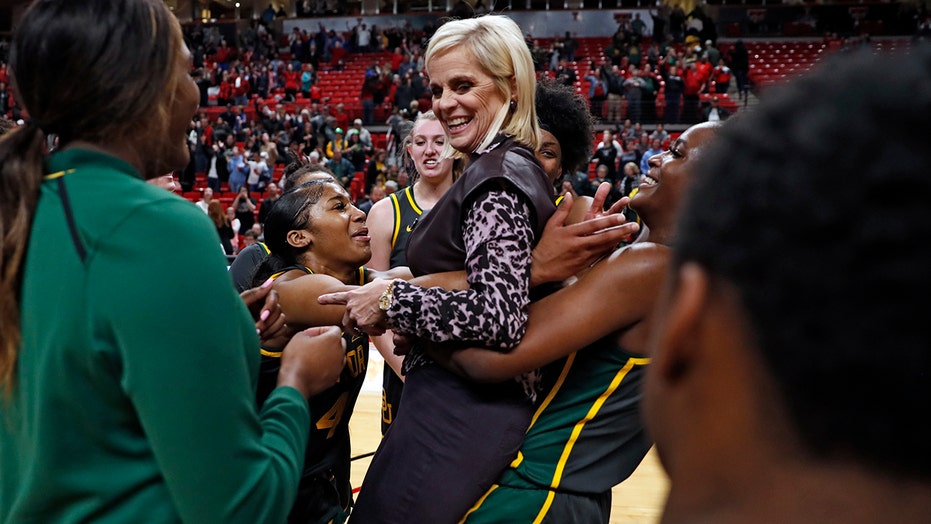 Kim Mulkey gathered her Baylor players for a quick chat before Queen Egbo grabbed the coach around the waist and hoisted her in the air.

Call it a “Lady Bear” hug for the fastest coach to 600 wins in Division I history — men or women.

Mulkey reached the milestone four games faster than Adolph Rupp with the Kentucky men 61 years ago, as Juicy Landrum scored 19 points to lift the No. 2 Lady Bears to a 77-62 victory over Texas Tech on Tuesday night.

The 57-year-old Mulkey secured No. 600 in her 700th game and 20th season — the nice round numbers of a 600-100 record and an average of 30 wins per season. And with the Lady Bears as defending national champions, their third title under her.

“Thirty wins, 20 years, I can’t comprehend that,” said Mulkey, the only women's coach to win national titles as a player — with Louisiana Tech — and coach.

“I’m thinking about the next game. The next championship. To put it in perspective, I’m humbled. But coaches don’t stop and smell the roses really until they retire. How much I have left in the old tank, I don’t know. But I’m not on empty.”

The Lady Bears (24-1, 13-0 Big 12) broke open a tie game by scoring the first seven points of the fourth quarter. They extended a pair of Big 12 records with their 54th consecutive league win and 43rd straight road victory in conference play.

“That’s a remarkable thing to do,” Te'a Cooper said of her coach's milestone after scoring 11 points and adding seven assists. “I’m happy for her and everything she’s done. It’s just amazing to be a part of it.”

Mulkey last week became a finalist in the coach category for the Naismith National Basketball Hall of Fame for the second time in three years. There are eight finalists for the 2020 class, which will be announced April 4.

“I know what being a player means to a coach,” Mulkey said. “And these kids mean the world to me. And not just this team. And not just the championship teams. I go back to that very first team that I inherited and how hard they played and we made the NCAA Tournament for the first time in the first year.”

Cooper hit a 3-pointer to start the fourth quarter, putting Baylor ahead for good at 55-52. Landrum followed with a pair of baskets as the Lady Bears outscored Texas Tech 25-10 in the fourth for their 17th straight win.

“We need to play with that same kind of fight and be able to sustain it for 40 minutes,” Texas Tech coach Marlene Stollings said. “So I think as we’re rebuilding and we’re still learning and growing in a lot of areas, that’s certainly one of them.”

Lauren Cox and Nalyssa Smith scored 13 points apiece and Egbo added 12 in Baylor's 22nd consecutive victory against Texas Tech, a streak that goes back to 2011.

Texas Tech: The Lady Raiders would seem worthy of an NCAA Tournament berth based on giving the Lady Bears two of their toughest tests. But Texas Tech hasn't translated it to most of the rest of the Big 12 schedule. With just four league wins, the Lady Raiders might have to win all five remaining regular-season games for a shot at the NCAAs.

Baylor: Mulkey couldn't help but notice that her noteworthy win came on a court once ruled by Marsha Sharp, who led the Lady Raiders to the 1993 national title with star Sheryl Swoopes. Texas Tech once ruled Baylor as well. But with their 22 straight victories, the Lady Bears have evened the series between the schools at 47-all.

Baylor players wore hats and T-shirts commemorating Mulkey's 600th win. “I wish and hope that our program can probably mail one to every player I’ve ever coached because that’s who needs to be wearing them,” said Mulkey, who made her Baylor debut in 2000.

Baylor: Oklahoma at home on Saturday.