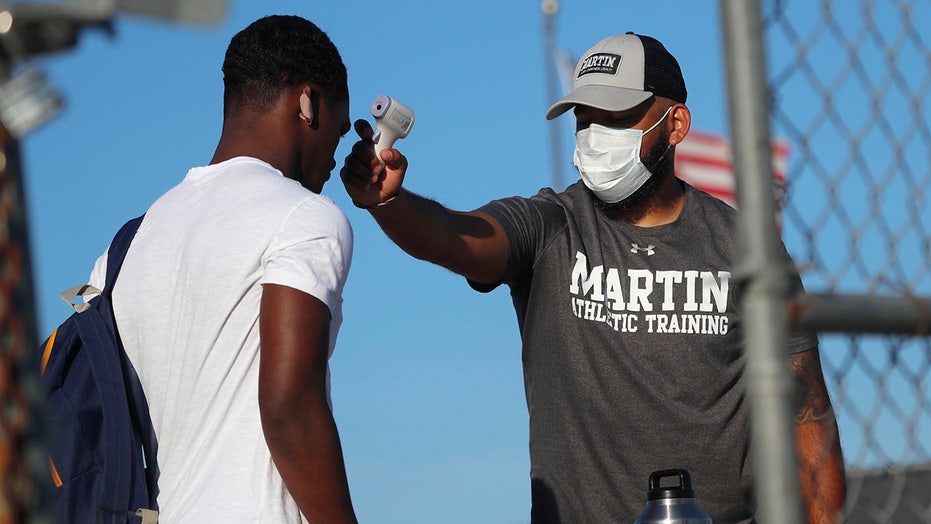 High schools across the country are trying to figure out how and when students might return to classrooms this fall. Many are also making sure their star quarterbacks and other athletes will be in shape when they do.

While states have been easing the economic and social lockdowns prompted by the coronavirus pandemic, some are now letting high school athletes return for summer workouts before teachers have even figured out how they are going to hold classroom instruction.

In places like Texas and Florida, where the “Friday Night Lights” culture of high school football runs deep, strength and conditioning sessions are bringing thousands of athletes to school for workouts, even while those states are seeing record numbers of new cases and hospitalizations since Memorial Day.

Some schools have already been sent scrambling when a player tests positive.

“It’s 13 weeks since we’ve had an organized workout with our teams,” coach Bob Wager said. “I think kids were excited to get out of the house.”

Eight days later, those same fields were empty when the school suspended workouts after a student tested positive and Wager and his staff began the work of tracing all of the athletes and get everyone to quarantine. Wager’s program was one of several Texas schools or districts to suspend workouts shortly after they started.

Still, dozens of states have been welcoming back high school athletes for strength and conditioning programs, according to the National Federation of State High School Associations. And it's not just football. Other sports such as volleyball and basketball, baseball and soccer can participate as well. Marching bands, too. Iowa became the first state to resume competitive high school sports when baseball and softball teams began play June 15.

In all, tens of thousands of high school athletes are working out or playing games. And with virus cases and hospitalizations rising in hot spots, their return is raising questions of whether it is too soon and too risky.

Instead of focusing only on how to return to sports, high schools should at least consider not playing at all, said Kenneth Shropshire, professor and chief executive of the Global Sport Institute at Arizona State.

“I’m really on the extreme of make things as safe as possible ... Just wait. It's not that important. Even in Texas," Shropshire said. “Could we forgo a year of high school football? Does the world come to an end?”

But the drumbeat to return to pre-pandemic “normal” is strong, from small farming communities that play six-man football to suburban and and city schools that draw tens of thousands of fans for games.

“What is more normal than communities celebrating and cheering while watching their sons and daughters play sports? That's as American as it gets,” said Karen Weaver, an associate clinical professor in Drexel's Center for Sport Management and a former field hockey coach at Ohio State and assistant athletic director at Minnesota.

“We also know none of this is over," Weaver said. “We know we need to get back to school. But does it automatically mean we have to get back to sports? ... (Football) is forcing an accelerated decision because we love football so much."

In Texas, the University Interscholastic League is gearing up for its 100th season of football as the state's governing body of public high school sports. It oversees more than 1,300 schools with nearly 170,000 football players each fall.

“That social structure of those games, when people come together, it was almost a healing for them — that they can get together with their neighbors and friends, and get their minds off the problems the society they were living in was facing,” Breithaupt said.

Football is a money-maker for the the UIL, which could lose more than $1.5 million in ticket sales if it can't hold playoff games and championships, according to an analysis by The Dallas Morning News.

It is also a lifeblood for school bands side events such as bake sales that support various school clubs. Eliminate those, Breithaupt said, and you put enormous pressure on school and club budgets that are already under pressure with the overall economic slowdown.

States do not appear to require the testing of high school athletes, citing costs and difficulty with managing such large numbers. A 16-page guidance manual distributed by the national federation did not include recommendations for regular testing of athletes.

Within two days of starting summer conditioning, UIL officials said they would immediately eliminate some restrictions and quickly phase out others. Staffing requirements of one coach for every 20 students to ensure social distancing was dropped. Starting June 22, athletes can gather in larger groups and workout room capacity will be increased from 25% to 50%.

Relaxing high school sports restrictions follows the broader phasing out of rules on business and public places such as restaurants and retail stores. Beyond high schools, youth sports leagues and have been allowed to resume in Texas and other states.

Still facing high schools is the question of how to play the actual games, particularly football when bodies crash into each other on every play, and whether they can host large numbers of fans. Acknowledging that crowds may be small or not even allowed, the UIL recently lifted its ban on live broadcasts of Friday night games for the upcoming season.

Texas announced this week that schools will be open for in-class instruction this fall, with details to come later.

Wager, the Arlington-Martin High School coach, said the suspension of workouts at his school illuminated the logistical problems facing high schools across the country. He is hopeful there will be a season to play.

“Team forges a deep, oftentimes life long relationship that I think is extremely important," Wager said. “I didn’t learn that in biology class, and I love biology class, but I learned that in a huddle. I think we need team. Maybe now more than ever."