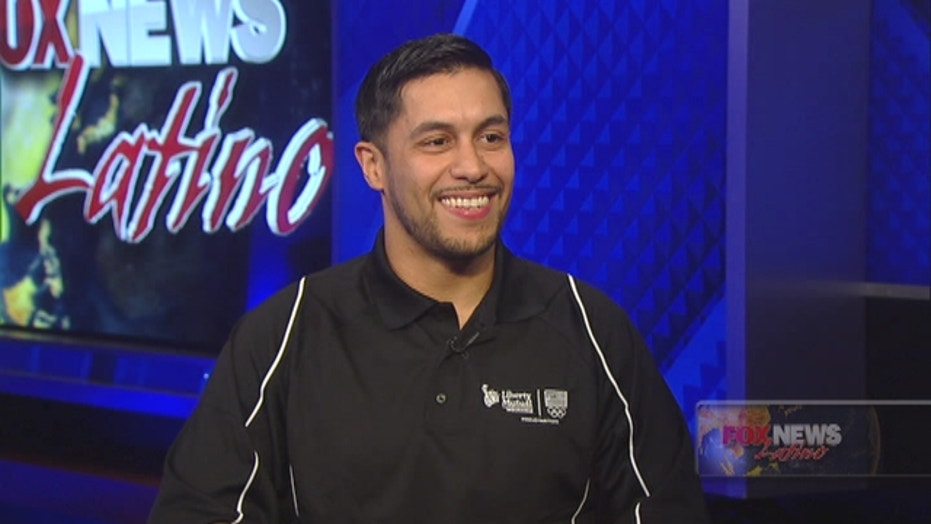 Rico Roman was a big-time athlete when he was growing up in Portland, Oregon. “Playing all kinds of sports, soccer, basketball,” Roman told Fox News Latino recently, “and then on into high school wrestling, football.” But not ice hockey.

Ironically, it wasn’t until after 2007, when Roman lost a leg during a tour of duty in that he reached his athletic pinnacle: Representing the United States at the Sochi Paralympics in March.

It was in Texas — where he now lives with his wife, Natalie, and their two kids, Juliet, 12, and Raul, 10 — that he was introduced to the game by a San Antonio organization that helps veterans with disabilities.

“The first sport they got me into was hand cycling, a bike with three wheels that I pedaled with my arms. From there, they asked me to try the sport of sled hockey,” he said.

"We joke that stand-up players have it easy,” Roman said, because they only shoot with their arms. As a sled hockey player, however, “You’re kind of doing a cross-country skiing motion with your arms across the ice, and then you slide your hand down and hit the puck.”

Now an avid NHL fan who roots for the Chicago Blackhawks, Roman has gotten a chance, thanks to his involvement with the U.S. sled hockey team, to meet Duncan Keith and to try on a championship ring. "It was huge," he said. "I've also picked up the hockey lingo."

Apparently, according to Roman, when someone has good puck-handling skills, "you say, 'He's got nasty dangles.'"

Roman started playing for a team of veterans affiliated with the American Hockey League’s San Antonio Rampage, hockey's version of minor league in baseball. In 2010, eight months after picking up the game, he tried out for the national team, which went on to win a gold medal at the Vancouver Paralympics. He didn’t make the squad, but “It made me more determined to come back and try out the next year.”

He did get to go to Oslo, Norway, for the 2012 world championship that the U.S. also won. “That was such a great feeling to win and to see our flag raised above the others and to hear our anthem,” he said. “It almost makes you want to cry.”

The current squad has a handful of veterans on it: Besides Roman, Jen Yung Lee, Craig Brady, Josh Sweeney and Paul Schaus have all served in the Armed Forces. As defending champs, Roman and his mates have to be considered favorites for the gold at Sochi, although Canada and Russia are likely to have a good shot.

“But we’re not taking any team lightly,” Roman said.

Sled hockey can be a surprisingly physical game, which doesn’t bother the former staff sergeant one bit. “I call it ‘football on the ice,’” he said. “It’s part of the game, big hits, and trying to score goals. I definitely love the physical part of the game.”

Roman used to work for US Paralympics in San Antonio as a sports coordinator for wounded veterans, but now, he said, playing for the Rampage and the national team “is my full time gig.” He now has a sponsorship from Liberty Mutual and has been featured in ads for Citibank.

At 33, he’s a bit of a graybeard on the national team, but that doesn’t mean he can’t keep thinking about a future in sled hockey, as a coach. “The first time I got to experience [coaching] was at a development camp for the national team,” he said. “That was such an honor. I’m hoping to do it again … Maybe find a career in it.”

But first, there's the small matter of a gold medal to be won.

His wife and kids will be going to Sochi to watch him compete. He's heard about the security concerns and the infrastructure problems being reported at the Olympic Games, but he isn't concerned.

“I’ve had some hardships with my tours overseas," he pointed out, "and missing a shower curtain or having dirty water isn’t going to scare me one bit. I’m ready to play.”