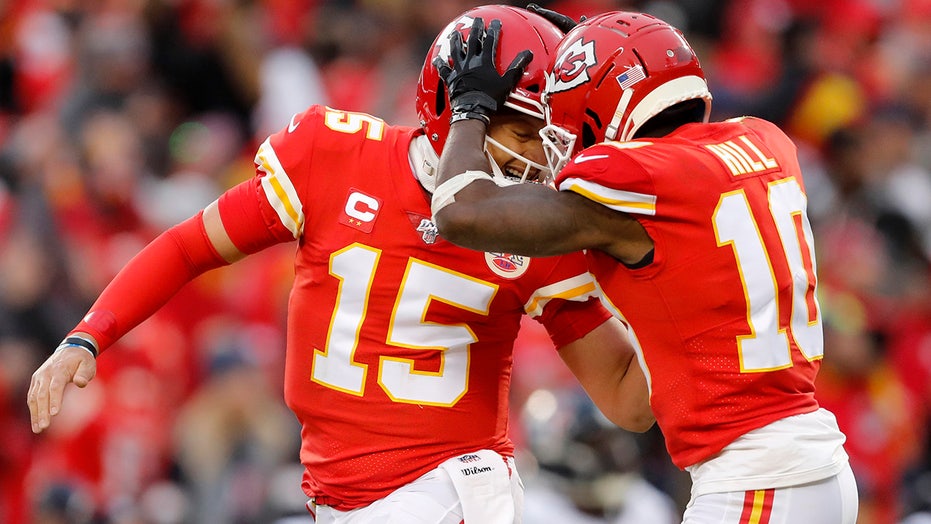 The Kansas City Chiefs are heading to their second straight AFC Championship game after they defeated the Houston Texans on Sunday, 51-31.

Patrick Mahomes led the Chiefs on a thunderous comeback after the team had been down by 24 points in the second quarter.

They became the first team to win a postseason game by 20 after being down by at least 20.

Kansas City Chiefs quarterback Patrick Mahomes (15) scrambling during the first half of the playoff game against the Texans. (AP Photo/Ed Zurga)

Mahomes threw four touchdown passes in the second quarter to put the Chiefs up at halftime and Kansas City didn’t look back after that. He was 23-for-35 with 21 passing yards and five touchdown passes.

It took a while for Mahomes and the Chiefs to get going.

Houston started off with a 54-yard touchdown pass from Deshaun Watson to wide receiver Kenny Stills to give the Texans a 7-0 lead. As the Chiefs were set to punt the ball away, the Texans blocked the kick; cornerback Lonnie Johnson Jr. scooped it up and returned it for a touchdown.

Before the first quarter was over, Watson had another touchdown pass to tight end Darren Fells. Then, an early field goal in the second quarter put the Texans up 24-0.

But then, Kansas City woke up.

Mahomes led the Chiefs to their first touchdown after a failed fake punt. He threw a 17-yard pass to running back Damien Williams to cut the lead.

The next three Chiefs scores came on Mahomes touchdown passes to tight end Travis Kelce. The Chiefs took a 28-24 lead into halftime. Mahomes became the first quarterback to throw four touchdown passes in a quarter in the postseason since Doug Williams did it for the Washington Redskins in Super Bowl XXII.

Williams had the next two scores on rushes in the third quarter, making the Chiefs’ lead almost insurmountable.

Watson and the Texans wouldn’t throw in the towel just yet. The quarterback had a 5-yard rushing touchdown to keep Houston within 10 points of the Chiefs heading into the final frame.

But, it took the Chiefs only four plays on their next drive to score a touchdown. Mahomes threw his fifth touchdown pass to tight end Blake Bell, ultimately sealing the deal. It was Bell’s first catch all season.

With the win, Kansas City is set to challenge the Tennessee Titans in the AFC Championship game. The two teams met in the playoffs during the 2017 season. Tennessee came back from a 21-3 deficit to win the wild-card game.

It will be Mahomes and the Chiefs’ second straight AFC Championship game appearance.