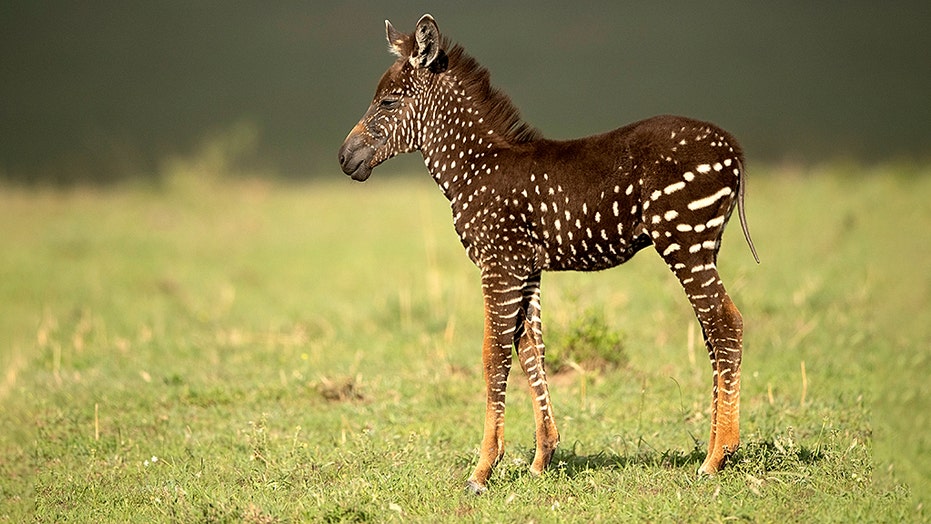 A zebra foal discovered in Kenya with a polka-dotted pattern instead of the distinctive black and white stripes that typically adorn the coat of the African species has a rare genetic mutation.

Wildlife photographer Frank Liu shared photos and video of the striking plains zebra discovered in the savannah of the Maasai Mara, a national reserve in southwestern Kenya near the Tanzanian border.

“At first glance, he looked like a different species altogether,” Liu told National Geographic of the week-old zebra.

But the zebra, who Liu’s Maasai guide named Tira, owes its eye-catching coloration to a rare genetic mutation called pseudomelanism, a condition that changes the stripe pattern of animals, biologist Ren Larison told the outlet.

WHY DO ZEBRAS HAVE STRIPES? PERHAPS TO DAZZLE AWAY FLIES

Similar foals have been spotted in Botswana’s Okavango Delta, according to Africa Geographic. But Tira is the first to be seen in the Maasai Mara and may the first-ever recorded zebra to have traded in its stripes for polka-dots, according to Liu.

Tira’s odd coat may make its life in the savannah’s wilderness more difficult because predators can easily spot animals with atypical color variations from among the pack, Larison told National Geographic.

Africa’s biting flies may pose another obstacle for Tira.

Wildlife experts have said that zebras developed their distinct black and white stripes specifically to deter the insects, who don’t like landing on striped surfaces, and not for the purpose of camouflage.