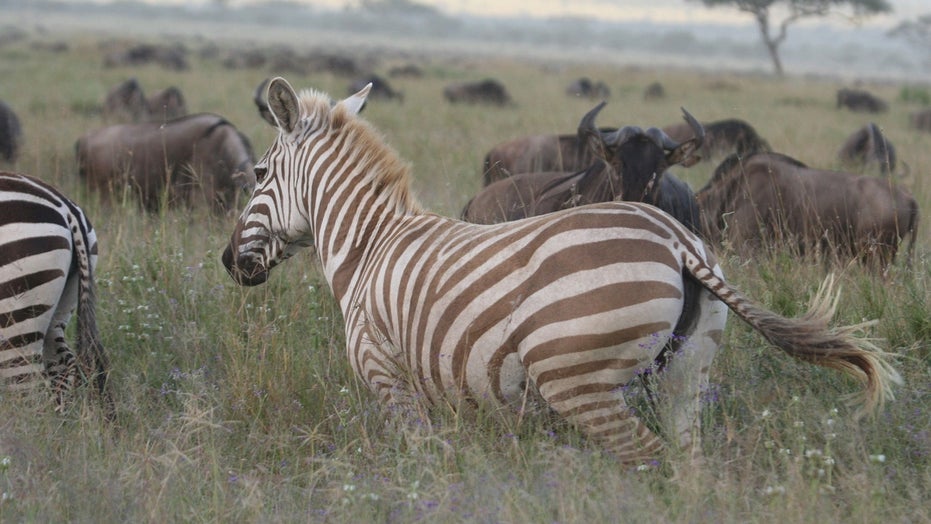 That was not a question nature photographer Sergio Pitamitz was trying to answer when he went on an expedition to Tanzania's Serengeti National Park in February. And yet, while filming zebras near a watering hole, he saw it: a rare "blond" zebra with a golden mane and dusty stripes, mingling among its herd as if nothing was out of the ordinary.

According to National Geographic, which recently published Pitamitz's remarkable photos, the fair-haired zebra in question likely has partial albinism — a genetic quirk that results in an absence of the skin pigment melanin.

Speaking to Nat Geo, geneticist Dr. Greg Barsh, who conducts research at the nonprofit HudsonAlpha Institute for Biotechnology, said that albinism is extremely rare in zebras and has been studied only in zebras living in captivity. The fact that a partially albino zebra was moving seamlessly within a wild herd suggests that the disorder might be less detrimental to zebra survival than previously thought. [The Pink and White Album: Amazing Albino Animals]

Even so, wearing blond stripes when everyone else in your crew has adapted to black stripes does likely pose some challenges to albino zebras.

In a study published in 2014 in the journal Nature Communications, University of California, Davis, ecologists suggested that zebras evolved their signature black-and-white stripes specifically to deter bug bites ( not for camouflage, as the popular logic goes). Tim Caro, lead author of that study, told Nat Geo that it's possible fair-striped zebras would have a harder time deterring pesky insects than their dark-striped kin, as some flies are more likely to land on uniform surfaces than on high-contrast ones.

This rare case has yet to be studied in detail. However, Caro said, the fact that so few blond zebras have been observed in the wild suggests the trait is probably detrimental in some way. It seems that blond zebras may not, in fact, have more fun.