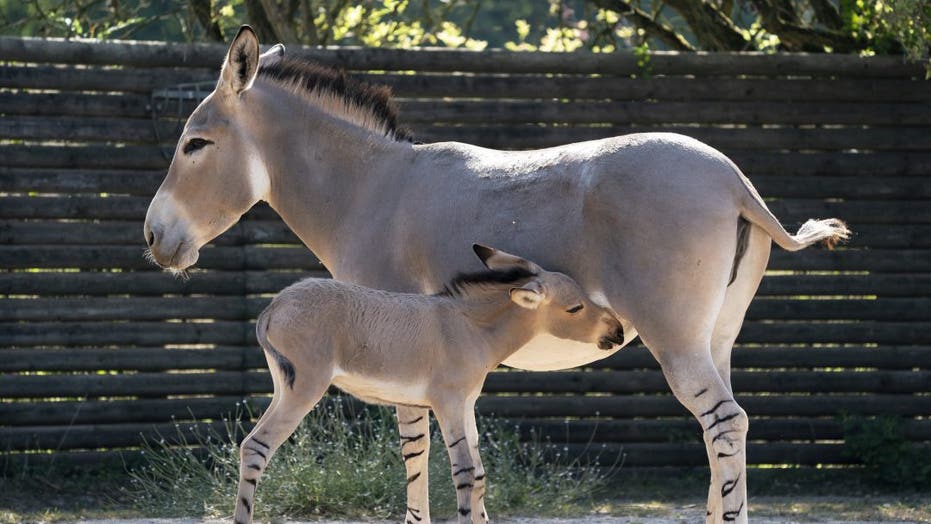 A newborn African wild donkey, one of the world's rarest and most endangered mammals, has been born at a zoo in the U.K.

The foal was born at Marwell Zoo near Winchester in Hampshire, England, British news agency SWNS reports. It is considered "very strong" and its parents, Jahzahra and Lars, are also doing well, according to specialists at the zoo.

“The birth of this foal is an extremely important addition to the zoo," Marwell Wildlife animal collection manager Ian Goodwin said.

"We are only one of three collections in the U.K. to hold a breeding herd of African wild ass," Goodwin added.

The African wild donkey have been a critically endangered breed since 1996 and now one rare foal calls Marwell Zoo home. Zookeepers at the Hampshire based zoo have reported that the foal is “very strong and active." (Credit: SWNS)

The newborn African wild donkey, which was born on Aug. 5, does not have a name yet. Zookeepers are presently unsure if it is a male or female.

In addition to the African wild donkey, the zoo also saw the births of two Hartmann’s mountain zebra foals on Aug. 6 and 11, respectively.

It is believed there are fewer than 600 African wild donkeys in the wild, according to EndangeredList.org.

Scientifically known as Equus africanus somaliensis, a "small population" of the wild donkey has been spotted in the northern part of Ethiopia in the Yangudi Rassa National Park.

Other groups have also been spotted in Eritrea and Somalia.