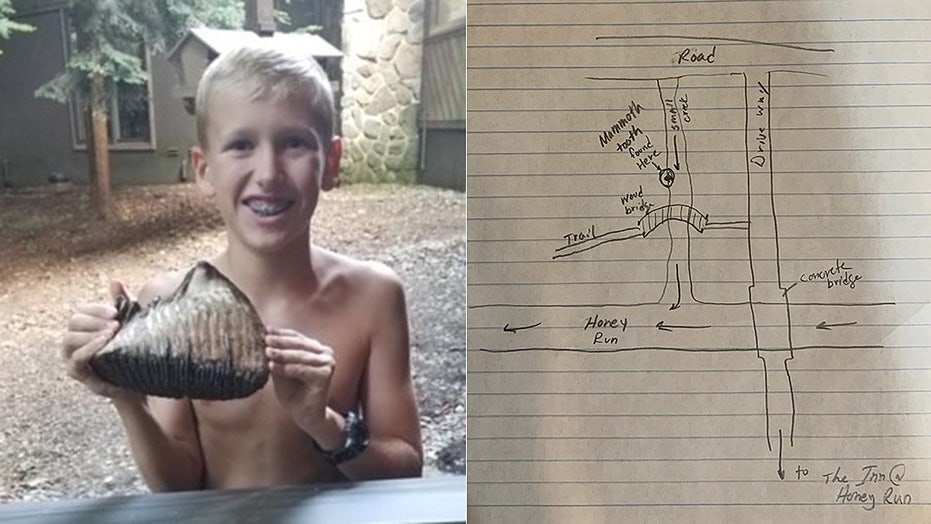 A 12-year-old boy discovered a woolly mammoth’s molar last month on the grounds of a resort in northeastern Ohio.

“Twelve-year-old Jackson spotted the tooth near Honey Run Creek during a family reunion photo shoot. It’s been verified by several scholars as an upper 3rd molar of a Woolly Mammoth!” the Inn at Honey Run posted on Facebook.

In a blog post, the resort in Millersburg explained that during a break in the photo shoot, Jackson Hepner spotted something sticking out of a creek on the Inn’s grounds. “I found the mammoth tooth about ten yards upstream from the bridge we had our family pictures on,” Hepner wrote, in an account of the discovery. “It was partially buried on the left side of the creek. It was completely out of the water on the creek bed.”

Experts have confirmed that the tooth is from a woolly mammoth. “Teeth of Woolly Mammoths are distinguished by parallel ridges, which the animals used to grind grass and seeds,” the Inn explains. “We couldn’t be prouder to be the site of such an extraordinary find and unforgettable experience!”

The tooth is a woolly mammoth's third molar. (The Inn at Honey Run)

Parallel ridges on the woolly mammoth tooth. (The Inn at Honey Run)

In 2017, a 10-year-old in New Mexico stumbled on a million-year-old fossil thought to be a Stegomastodon skull.  The following year, three boys in Mississippi dug up a mastodon fossil believed to be almost 100,000 years old.