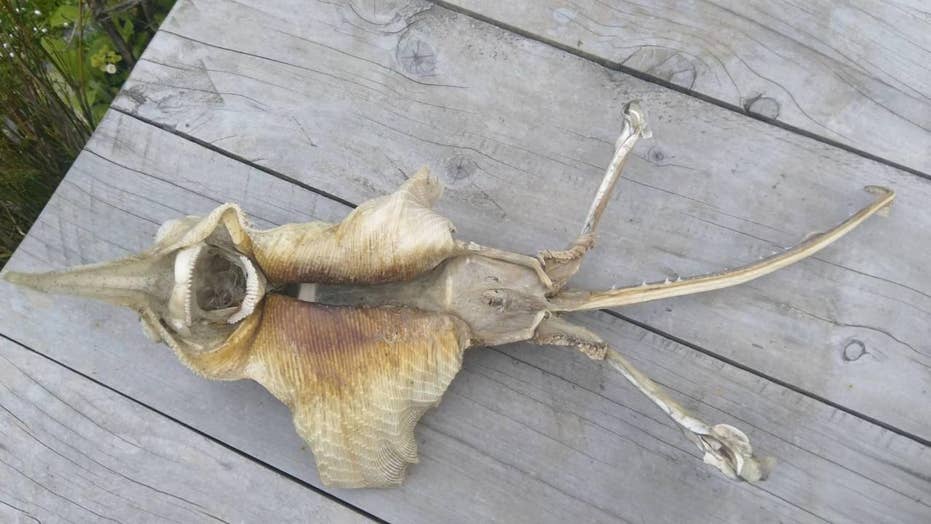 Here are all the mysterious sea creatures that washed ashore in 2018.

A woman taking an evening stroll on a beach in the United Kingdom came across a mysterious pale-blue creature she would later learn was a so-called “buoy barnacle,” an unusual and reportedly rarely-seen crustacean.

Fleur Bament told the UK-based news outlet SWNS she took a walk along Saunton Sands, a beach near Devon County in southwest England, on Saturday with her son and her son’s girlfriend. During their stroll, she noticed the strange-looking creature but wasn’t sure what it was. Dumbfounded, she took to a public Facebook group in the hopes someone could help her identify it.

It was determined to be a buoy barnacle, scientifically known as Dosima fascicularis. These crustaceans — related to crabs, lobsters, and shrimps — are not to be confused with the similar-looking goose or acorn barnacles. Typically found on rocky shores, buoy barnacles, which were first discovered in 1786, are “commonly found in small numbers attached to small floating objects,” but “can also be washed ashore in large groups attached to the same object,” according to the Marine Life Information Network.

The unusual 'buoy barnacle' that washed up on a British beach. (SWNS)

“The buoy barnacle is at home in the warmer waters of the Atlantic and Pacific Oceans but is sometimes stranded in large numbers along the western coasts of Britain and Ireland after south-westerly winds,” the network notes, adding these creatures can also be a pale-yellow or purple color.

At least one Facebook user who saw the picture of the barnacle said it "looks like something from 'Alien,'" appearing to reference the hit 1979 film.

The discovery “certainly made for an interesting last-minute stroll,” Bament told SWNS.