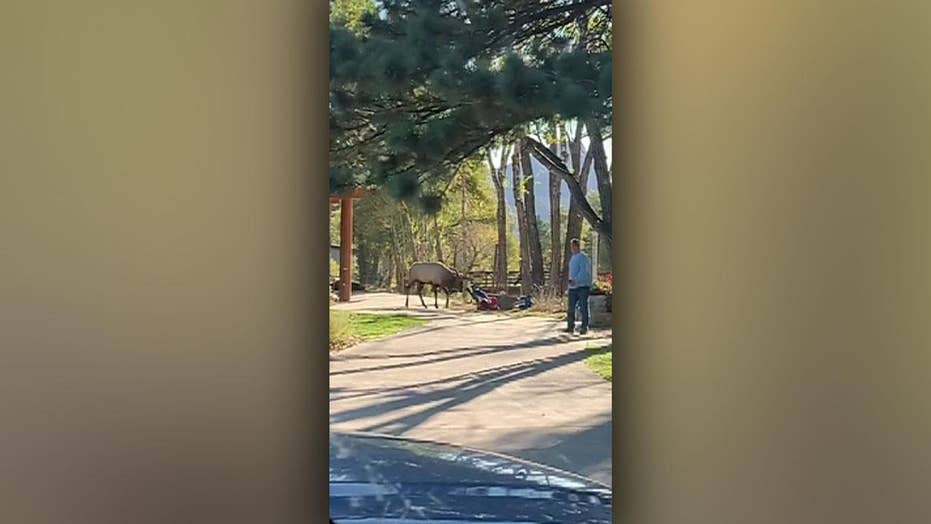 Raw video: Videos show a bull elk charging at a crowd and damaging a pickup truck in Estes Park, Colorado.

Two people were injured Thursday after an elk violently charged at a woman in Estes Park, Colorado, officials said.

In a video recorded by a witness, a woman can be seen on the ground using her feet to fend off a bull elk that had charged at her with its antlers.

COLORADO WOMAN PLACES WILD BOBCAT IN BACKSEAT ‘JUST FEET AWAY’ FROM SON, 3: ‘THIS COULD HAVE BEEN TRAGIC’

The adult male, which can weigh up to 1,100 pounds and can stand at 5-feet tall, backs off before charging at the woman after she begins to move.

In a second video, Estes Park public works employee Brian Berg is seen driving his Ford Ranger pickup truck between the woman and the bull elk. At that point, the animal charges at the car and strikes it head-on.

"I've never had to do that before, but I saw people in trouble and I figured I could get there quick," Berg told FOX31. “I knew the best thing for me to do at that point in time was to get the truck in between them.”

A second man was injured during the incident after he jumped out of the way of the animal, slipped and hit his head on a rock, NBC News reported. He can be seen in the video on the ground not far from the woman.

JOGGER RESCUES DEER FROM FENCE TWICE: ‘YOUR A-- BETTER NOT GET STUCK AGAIN!’

The woman was not seriously injured and did not seek medical attention but the man was taken to the hospital in unknown condition, officials said.

CPW spokesman Jason Clay told FOX31 that the people in the videos were too close to the elk.

"We are in the rut (breeding season) and bull elk will very aggressively defend their harems. Bull elk will fight over breeding rights,” he said. “Let the elk move away on their own, never ever get that close because something like this could happen.”

Officials said they had an issue with the same elk the day prior.