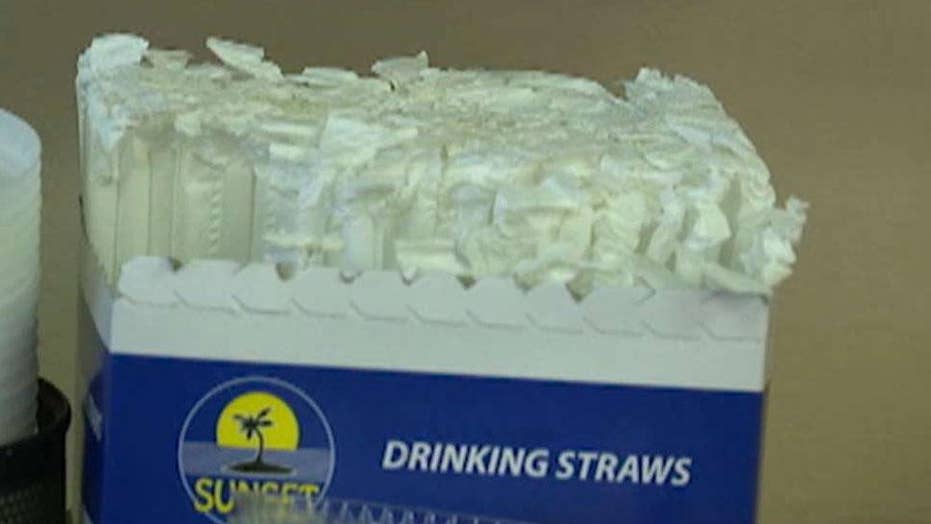 WESTAMPTON, N.J. -- Legislators in Hawaii and New Jersey are considering the toughest statewide plastic and Styrofoam bans in the country, in moves that could usher in a wave of anti-plastic legislation.

New Jersey’s proposed law would ban Styrofoam beverage and food containers, plastic bags and plastic straws from all retailers and restaurants in the state.

“The goal here was not just to clean up litter but to deal with litter that is not biodegradable,” New Jersey Sen. Linda Greenstein, co-sponsor of S2776, told Fox News.

“Plastic is made from fossil fuels and it’s time for us as a society to move away from our dependence on petroleum and toward clean energy sources,” Hawaii state Sen. Mike Gabbard told Fox News about SB 522.

Both proposals are currently making their way through their respective state senates.

California and Hawaii are the only states that already ban single-use plastic bags.

Several big cities, include Boston and Chicago, have similar bans.

Advocates point to a 2008 United Nations report on Plastics Pollution that shows if current trends continue, the oceans could contain more plastic than fish by 2050. However, that same report notes that more than 90 percent of the plastic pollution comes from Africa and Asia. (2008 Getty Images)

Advocates point to a 2008 United Nations report on Plastics Pollution that shows if current trends continue, the oceans could contain more plastic than fish by 2050. However, that same report notes that more than 90 percent of the plastic pollution comes from Africa and Asia.

The plastic bag industry argues all these bans go way too far.

A 2018 environmental litter survey, paid for by New Jersey, found that neither Styrofoam food containers, plastic bags or plastic straws were among the top 10 most littered items in the state.

“We’ve described it as taking a sledgehammer to a mosquito,” said Matt Seaholm, director of the American Progressive Bag Alliance.  “Plastic retail bags are the best options at checkout as long as they are disposed of properly.”

The industry argues legislators should work on enforcing current litter laws, and promote more recycling education. While plastic bags can be recycled they cannot be thrown out in curbside recycling bins. Instead, consumers have to bring their plastic bags back to their local stores which then dispose of them properly.

Gabbard and Greenstein both say their proposals are works in progress.

For instance, Greenstein said the New Jersey ban has been amended recently to include two exemptions. One amendment allows those who are disabled to request plastic straws. The second exempts those living on government assistance from paying the 10-cent paper bag tax.

“It’s extremely controversial, no question. But my starting point is this something that would be good and important for the environment, and I believe it is,” Greenstein said.

The senator encourages people and businesses to contact her if they have concerns so that the bill can potentially be amended further.

Lori Ann Giardina, co-owner of the South Street Creamery in Morristown, N.J., said she thinks the ban is a good idea but she’s still grappling with the idea of serving milkshakes without plastic straws.

“The quality of the products that are on the market as far as paper straws,” Giardina said, “are not great.”