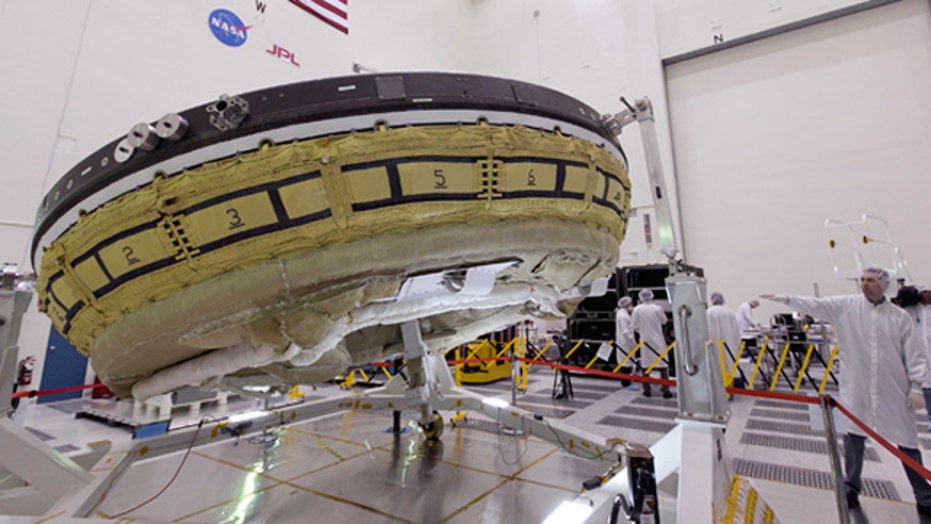 Why NASA is launching a ‘flying saucer’

If humans are ever going to visit Mars, NASA must consider how it will transport astronauts across millions of miles of space.  But the final few miles of that journey may be the most volatile.

“Anytime we land on Mars, there’s a lot of really complicated things that have to happen,” explained Ian Clark of NASA’s Jet Propulsion Laboratory, during an interview.

In fact, landing may be the biggest challenge of any expedition to Mars.  In 1971, the Soviets crash-landed the Mars 2 Lander on the red planet, making it the first human artifact there.  That distinction aside, the wreckage spelled out a cautionary tale for future generations of Mars explorers: Landing here is never easy.

With a mandate to fly humans to Mars in the coming decades, the stakes are infinitely higher.  A manned spacecraft will be extremely heavy and will face far less resistance than it would in earth's dense atmosphere because the Martian atmosphere is over 100 times thinner.

“The endgame…is actually slowing this vehicle down that’s coming into the atmosphere at 10,000 miles per hour and bringing it down to zero miles per hour,” said Clark, NASA’s principal investigator for its “flying saucer” test program.

Landing a large-payload spacecraft and astronauts in a thin atmosphere has created a new challenge for physicists designing a descent system, which is why NASA is testing its Low-Density Supersonic Decelerator (LDSD), better known as a flying saucer.

A giant balloon will lazily lift the saucer 23 miles above earth.  About two-and-a-half hours later, the balloon will release the vehicle and a rocket will ignite, propelling it upwards another 11 miles at supersonic speeds.

At 34 miles above earth, the stratosphere resembles the atmosphere of Mars, giving NASA a comparable playground for test-landing a 6,800-pound vehicle.

Speeding at Mach 3.5, the rocket-powered vehicle will be traveling at speeds similar to those experienced during a Mars landing.  The saucer will initiate two braking systems to slow it down.  The first is a balloon-like gas-ring which will inflate on the perimeter of the saucer.  The second is the largest supersonic parachute ever deployed, according to NASA.

Once the first braking system has slowed the saucer to a speed of Mach 2, the parachute will deploy, further decelerating the vehicle to subsonic speeds.  If things go as planned, the extreme drag created by the 100-foot diameter parachute will take the saucer from supersonic velocity down to a safe landing speed.  NASA believes it will fall to earth in about 40 minutes, eventually landing in the Pacific Ocean at about five miles per hour.

The space agency tested a similar parachute last year, but it failed.  According to NASA: "In the harsh environment found at high altitude and high Mach numbers, the chute shredded during inflation." Engineers made several changes to the parachute, including the addition of Kevlar to its most vulnerable areas.

The flying saucer design has garnered attention from sci-fi fans because it resembles alien spacecraft conjured by Hollywood in shows like “The X-Files.”  But the real reason for the saucer shape is to create drag to help slow it down.  “We don’t fly them horizontally like a classic flying saucer would look like,” Clark said.  “We fly it broadside into the wind to help produce that drag.”

The test from the Navy's Pacific Missile Range Facility in Kaua'i, Hawaii has been postponed four times this week as a result of bad weather. In a statement NASA said that it will evaluate the next available launch opportunity Saturday.