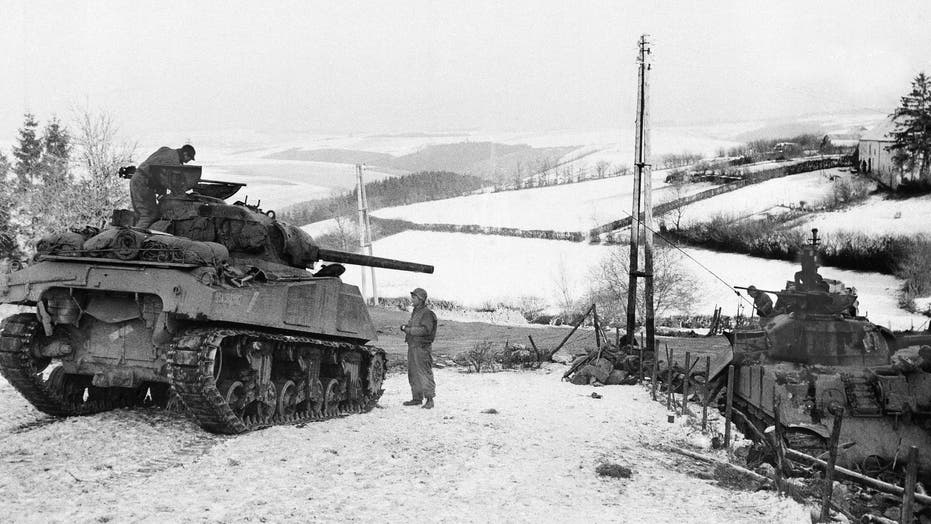 The last major German offensive campaign on the Western Front has become known as the "Battle of the Bulge" for the thrust into the Allied lines.

For the Americans, this was to be the largest and bloodiest single engagement of the Second World War, and also the third deadliest campaign in American history.

It began 75 years ago on Dec. 16, 1944, and while it caught the Allied forces off guard, in the end, the German Army failed to meet its objectives and the battle essentially exhausted the Germans of their resources.

Despite its failure, for the Germans, the battle is notable for several reasons. It highlighted that even in the late stages of the war the German military was able to mount such an offensive, but also that the Germans were able to utilize deception in a way the Allies hadn't expected. Moreover, the German military was also rolling out advanced military hardware – including small arms that would influence weapons development to this day.

In December 1944 the German military was largely seen as a spent force. The Allied success began with the D-Day (June 6) landings in Normandy, and after breaking out of the region, followed by additional landings in the south of France; it seemed that the Germans were on the verge of defeat. However, the Allies had suffered setbacks as well, including the failed paratrooper assault on the Netherlands in September, and the failure to break the German lines in the Battle of Hürtgen Forest, which ended just as the Germans’ Ardennes offensive was to begin.

More importantly, Allied forces were fatigued from the near-continuous fighting, supply lines were overstretched and supplies depleted. The Allies believed the Germans were digging in and planned to use the time to regroup for a renewed offensive.

Due to the wooded terrain of the Ardennes region on the French-Belgian border, the Allies opted to reduce the number of defenders, believing that no German counter-attack would be launched in that sector. However, history had proven otherwise – it was through these woods that Germany had successfully launched its "Blitzkrieg" attack against France in the late spring of 1940.

HOW D-DAY TECHNOLOGY MADE OPERATION OVERLORD A SUCCESS

In December 1944 the Germans tried to do it again, and they used a number of deceptive tactics in advance of the attack.

In this Jan. 6, 1945 file photo, American tanks wait on the snowy slopes in Bastogne, Belgium during the Battle of the Bulge. (AP Photo, File)

"If you look at where the Allies were – after fighting through the hedgerows of Normandy and racing across France, to them the Germans looked bloodied and beaten," David J. Ulbrich, program director and associate professor in the Master of Arts in History and in Military History at Norwich University in Vermont, told Fox News.

"There was a certain amount of hubris involved," Ulbrich added. "It was in many ways a colossal failure of intelligence, and the Allies misread the tea leaves. But from the American perspective, the Germans were going to be defeated – it was just that the Allies' supply lines couldn't keep up. They (the Americans) were out of food, ammunition and gasoline. It was a good time to take a break, and then you had a huge blizzard."

By contrast, the Germans were very prepared and had amassed more than 400,000 men, and just over 1,400 armored vehicles including tanks, tank destroyers and assault guns. In the initial attack the Germans had an almost two-to-one advantage in manpower and for the first time on the Western Front outnumbered the Allies in terms of tanks and other armored vehicles.

More importantly, the Germans utilized deception effectively, and that was something that helped catch the Allies off guard.

"The Germans historically had not been good at deception," Robert Citino, senior historian at the National World War II Museum in New Orleans, told Fox News.

"The Allies had the gold standard of military intelligence throughout World War II, but in the Ardennes campaign the Germans did a good job with comprehensive subterfuge and deception," Citino added. "This included false radio traffic from an army that didn't exist, and the Allies fell for some of it."

One of the key German tactics leading up to the offensive was in tricking the Allies into thinking they were preparing defensively.

"The German radio traffic talked about the 'Defensive Battle in the West,' and that gave the impression that they are standing on defense as effectively as they can," added Citino.

"This was really a case of good deception by the Germans and bad intelligence by the Americans," said Ulbrich.

The Germans employed a number of deceptive tactics that included false flag operations, led by Waffen-SS commando Otto Skorzeny. Dubbed Operation Greif, it included German soldiers wearing captured Allied uniforms and using captured vehicles to cause confusion. Around 150 of the best English speakers were organized into a commando unit named Einheit Stielau, but in the end, both the lack of enough equipment and the failure of the Germans to master American idioms reduced the effectiveness of the unit.

In this Dec. 1944 file photo, German infantrymen pass by burning captured American vehicles during the drive into Allied lines on the Western Front during the Battle of the Bulge. (AP Photo, File)

Ulbrich noted that this operation created paranoia and was disruptive but only in small areas and didn't affect the overall strategy of the battle.

"It is an exciting story, and makes a good narrative in a movie, but it didn't really change the outcome," Citino told Fox News. "The battle was also notable in that this was the last German paratrooper drop of the war, and they were supposed to secure a major road. It didn't work out as the soldiers landed all over the place."

Unlike the major advances that the Allies undertook for the D-Day landings – which included gliders, landing craft and even an artificial harbor – the German developments were on a far smaller scale, but were still significant. Germany's war effort was beginning to produce jet aircraft and rockets, but for the soldier on the ground much of this didn't mean anything.

Instead, those men came to appreciate developments in small arms.

"Most of the German Army was infantry," explained Citino. "We focus on the tanks, but we have to remember that Germany entered the war with 100 divisions yet only 10 were armored. Throughout the war, they had millions of horses to move equipment. World War II buffs are guilty of focusing on the King Tiger II tanks, but millions of German soldiers never saw one – what they did see were the automatic weapons."

The Sturmgewehr 44 seen at a World War II re-enactment this past summer. This was the world's first "assault rifle," and was one of the most advanced small arms to see use during the Second World War. (Photo: Peter Suciu)

These included the StG44 (Sturmgewehr 44), the world's first "assault rifle," which would later influence the Soviet-made AK-47; the G-43, a German semi-automatic rifle; and the FG-42, an automatic rifle developed for the paratroopers.

THE LONG GUNS: HISTORY OF US MILITARY RIFLES

An original but deactivated StG44 in the author's collection. While this weapon was superior to the Kar98K, the main battle rifle employed by the German Army, its introduction into the war has been described by Prof. Ulbrich of Norwich University in Vermont as a case of too little, too late. (Collection of Peter Suciu)

"That was an innovative and formidable weapon," added Ulbrich. "But they didn't have enough of them to make a difference. That was one of the problems with the Germans by this point in the war. They came up with these innovative weapons system, but they were spread thin trying to come up with solutions so no one weapon system gave advantage at the tip of the spear."

The final problem for Germany was simply one of numbers. After four-and-a-half years of fighting on multiple fronts, they were, in fact, a spent force.

The Fallschirmjägergewehr 42 ("paratrooper rifle 42") was introduced specially for the German elite paratroopers. While it was an influential automatic rifle, it was only produced in limited numbers and had little impact on the outcome of the war. The examples above are replicas of the two versions produced during the war. (Collection of Peter Suciu)

"The units they could bring up were 'Volksgrenadier' – made up of substandard manpower combed out of the rear areas, hospitals and administrative posts," said Citino. "If you are moving ahead with substandard infantry you can't get real far. Even with better weapons [it] isn't going to help enough. It isn't a winning combination."