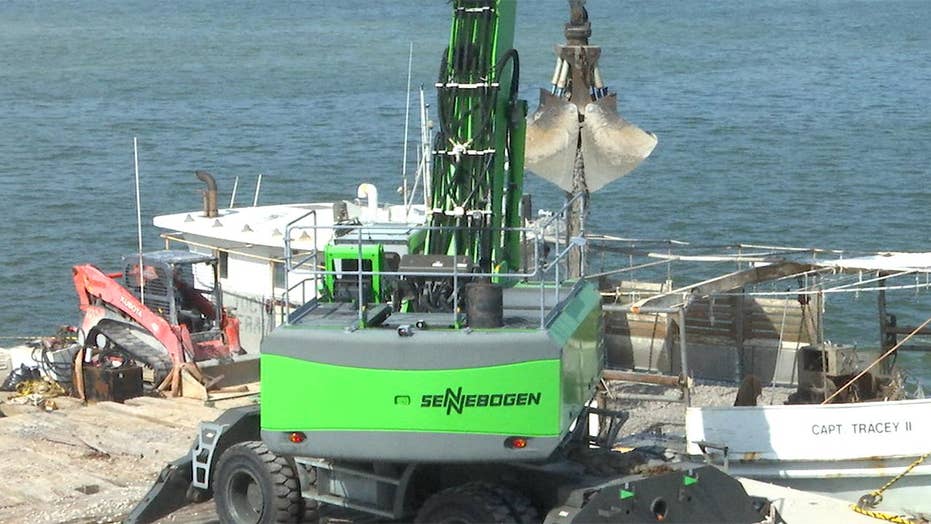 Reefs would benefit ecosystem and serve as natural barriers for hurricanes

SAN LEON, Texas – It’s been nearly a year since Hurricane Harvey battered the oyster population off the coast of Galveston County.

Excessive rainfall and freshwater runoff depleted salinity levels in the bay, nearly wiping out the oysters in the bay, according to the Texas Parks and Wildlife Department. That had repercussions still being felt in the oyster industry.

“Oysters need brackish water, a good mixture of freshwater and saltwater to thrive. In our case, the freshwater that came through, it killed half of the population or more,” Raz Halili, vice president of Prestige Oysters, an oyster distributor.

Prestige Oysters, one of the nation's leading oyster distributors, is laying down 10,000 tons of limestone for a new oyster reef off the coast of Galveston County. (Fox News)

That has nearly crippled the once thriving oyster industry at Galveston Bay, which provides roughly 15 percent of the nation’s oyster harvest and pours $50 million into the state economy.

Limestone will provide a substrate for oysters, allowing them to have something to hold on to when they spawn. (Fox News)

There have been several efforts to restore oyster reefs in the area. In October, the Texas Parks and Wildlife Department completed restoration efforts at four areas in Galveston Bay.

Last week, Prestige Oysters laid down 10,000 tons of limestone for a new oyster reef—the first new reef on a private lease in the area in about 40 years.

“What this will do is it will provide that substrate for the oysters that are there, and when they spawn they’ll have something to catch onto, and it will build up the reef,” said Halili.

Halili and his family take on the endeavor every year—laying limestone in the Gulf of Mexico. Over the past 10 years, Halili estimates they’ve planted about 120,000 tons of limestone off the coasts of Louisiana and Texas.

Sustainability is key to ensure this way of life. But, building oyster reefs doesn’t only ensure a harvest.

“Oysters are a keystone species. Anytime you build an oyster reef, it’s going to benefit everyone. They filter our waters. An adult oysters can filter up to 50 gallons a water a day. And, at the same time, they create new life for shrimp, crab, and fish that will feed off the oyster reef,” said Halili.

Hurricane Harvey was not the first set-back for the multimillion-dollar industry. In 2008, Hurricane Ike barreled through the region, burying the oysters under deep sediment and suffocating much of the population.

“What oysters do is they provide that barrier offshore from the shoreline, and it helps dissipate some of that wave energy. There’s a lot of efforts where people are trying to establish oyster reefs not just in deeper water for harvest but also on shorelines,” said George Guillen, executive director of the Environmental Institute at University of Houston-Clear Lake.

Prestige Oysters likely won’t yield a harvest from their most recent site for another two or three years—the length of time it takes for oysters to reach market size.

The threat of severe weather is omnipresent, as well. But, Halili said, they’re undeterred.

“Being able to benefit the business and the ecosystem at the same time, it’s a great feeling,” said Halili. “I’d like to see more of these efforts.”