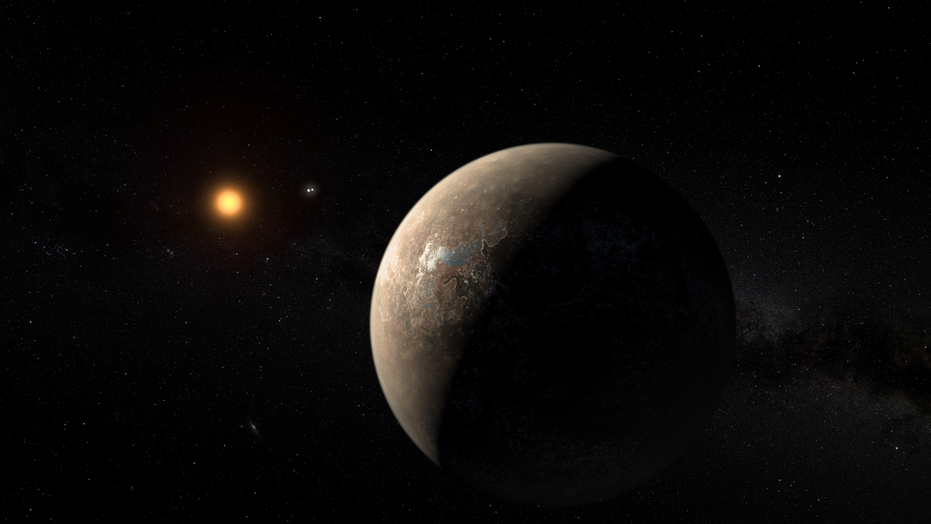 The nearest star to our sun, Proxima Centauri, may actually be host to two planets, including a "Super-Earth," according to a new study.

The research, published in Science Advances, notes that there is "evidence of a possible second planet" orbiting around the star, 4.2 light-years from Earth. If it is indeed a planet, the celestial object, potentially known as Proxima c, could well be what's known as a "super-Earth," an exoplanet that has a mass larger than Earth but smaller than Neptune.

Artist's impression of Proxima b, which has three stars in its sky. (ESO/M. Kornmesser)

It's likely that the planet is not habitable, the study's lead author, Mario Damasso, told Fox News.

"Not habitable at all, I would say, since we predict with back of the envelope calculation its temperature to be around 40 Kelvin," Damasso said in an email. "We have no clue on the actual planet structure and composition, although we can likely imagine that it has an extended atmosphere made mostly of [hydrogen] and [helium]."

Damasso compared Proxima c to exoplanet K2-18, a planet that is in the habitable zone of its star, "but actually far from being habitable, making Proxima c out of business."

The astronomers looked at more than 17 years' worth of radial velocity data to come up with their conclusion.

While it's likely another planet, the researchers cannot completely rule out that the evidence spotted could be coming from the star's magnetic field.

This artist's impression shows the planet Proxima b orbiting the red dwarf star Proxima Centauri, the closest star to the Solar System. The double star Alpha Centauri AB also appears in the image between the planet and Proxima itself. (ESO/M. Kornmesser)

"The analysis of photometric data and spectro-scopic activity diagnostics does not explain the signal in terms of a stellar activity cycle, but follow-up is required in the coming years for confirming its planetary origin," the researchers wrote in the study's abstract. "We show that the existence of the planet can be ascertained, and its true mass can be determined with high accuracy, by combining Gaia astrometry and radial velocities."

However, the signal was traced over 1,900 days, giving the researchers confidence it is likely a second planet orbiting the star.

Damasso said the discovery of Proxima c, "roughly the same [age] of the host star" at 4.8 billion years, is exciting on a number levels, including the fact it wasn't easy to spot.

"In my opinion, the detection is particularly interesting because the signal in the radial velocities has a low amplitude and a long period, therefore in principle not easy to detect and confirm with a single technique," Damasso said. "We are exploring the consequences of a longer-term spectroscopic follow-up in another work we hope to publish soon."